Two balls in the water on the back nine scupper Bryson DeChambeau's challenge at the BMW Championship, where he shares the third-round lead with Patrick Cantlay while Rory McIlroy is just four behind 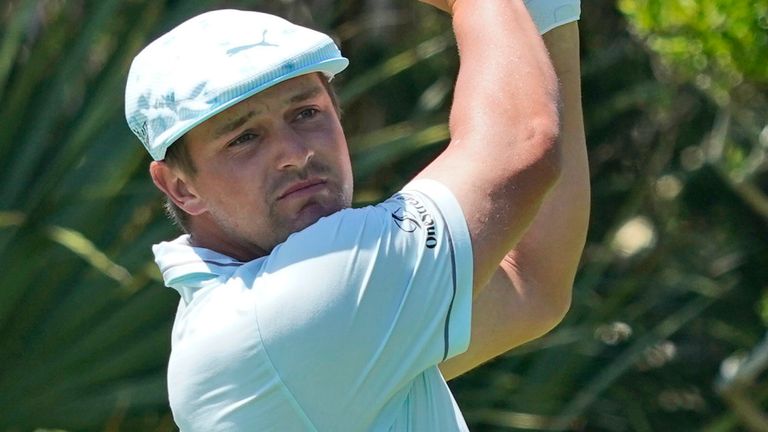 Bryson DeChambeau's air of invincibility was undone by inconsistency as back-nine mistakes handed a share of the BMW Championship lead to Patrick Cantlay.

DeChambeau, who missed a six-foot putt for a 59 on Friday, looked poised to run away with the tournament in Baltimore as he made back-to-back eagles in an outward 30 and then got to 23 under after another birdie at the 11th, with Caves Valley looking defenceless against the longest hitter on the PGA Tour.

With two par-fives to come, he may have been thinking about a second stab at breaking 60, but not after he carved his second into the water on the long 12th and ran up a bogey-six, with worse to follow at the next when his tee shot to the par-three failed to make the carry over the hazard.

DeChambeau's errors suddenly opened the door for playing-partner Cantlay, who made an eagle and five birdies and finding himself in the outright lead on 22 under until a poor drive at the last cost him his only bogey of the day.

Cantlay signed for a 66, while Rory McIlroy suddenly roared back into contention with a superb 65 that will see him start the final round just four shots adrift of the leaders along with Ryder Cup hopeful Sergio Garcia (67).

Cantlay did well to keep DeChambeau within striking distance early on, making eagle at the second and birdie at the short third before the overnight leader turned on the style, holing from 25 feet for eagle at the fourth and again from twice that distance after comfortably driving the green at the par-four fifth.

A 30-foot birdie putt found the target at the eighth, and DeChambeau pitched to within a few inches for a tap-in three at the 11th before his problems began at 12, where Cantlay birdied and converted from 35 feet at the 13th for his third straight gain.

DeChambeau fought back with birdies at 14 and 16 either side of another blemish at the 15th, and Cantlay followed him in at the 16th before he was unable to get out of trouble at the last and had to be content with a share of the lead, with the top eight players separated by only four strokes.

McIlroy is among that group as he atoned for Friday's disappointing 70 with a bogey-free 65 that began with a woeful wedge into the first, which he countered with a 45-foot putt for birdie.

The two-time FedExCup champion holed another big putt for his fourth birdie of the first six holes, and he added three more after the turn before lipping out at the last, and he insisted he did not play that much differently to 24 hours beforehand.

"I didn't waste as many shots as I did yesterday," McIlroy said. "I maybe didn't drive it quite as good as I did yesterday, but when I put myself in position today, I was able to take advantage and make the birdies. So I scored a little bit better. I don't feel like my game was that much different. Maybe I holed a couple of extra putts?

"But if you go out here and play remotely well, you're going to have a chance to shoot a low score. I don't feel like I did anything spectacularly well today, but just everything was solid."

McIlroy is projected to climb to 21st in the FedExCup standings and therefore qualify for next week's Tour Championship, and he fancies his chances of making a late run at the $15m bonus when he gets to East Lake due to the staggered scoring system now in place, a format he has no problem with.

"I think it lets you free-wheel a little more on the first day," he said. "This will be the third FedExCup that we've done this staggered start, and I think I was four behind Brooks the first year, and then I was maybe four or five under starting last year, and this year depending on how I play tomorrow, I might start a little further back.

"But it's OK because I can go out and shoot six under next Thursday and the leader shoots two over, and all of a sudden you're right in the golf tournament.

"I like the format. I think that all 30 players going into next week should feel like they have a good chance to win. Even when you are starting 10 back, if you shoot a good one that first day, you're right back in it."

Garcia further enhanced his claims for a Ryder Cup place and fired a 67 which swept him into the share of fourth on 17 under, the Spaniard now projected to qualify for East Lake next week, while Jon Rahm is one further back after he bogeyed three of the last six holes in a frustrating 70.