Bryson DeChambeau missed four putts for the title as Patrick Cantlay emerged as the winner of the BMW Championship with a birdie on the sixth extra hole. Cantlay also booked the final automatic qualifying place for the US Ryder Cup team. 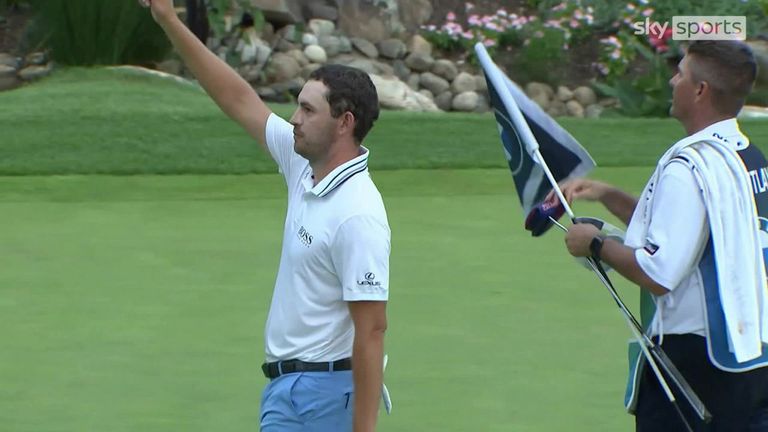 Patrick Cantlay got the better of a pulsating duel with Bryson DeChambeau as he snatched victory in a marathon playoff at the BMW Championship.

Six extra holes were required to decide the outcome, with DeChambeau missing four decent chances to claim his first title since the Arnold Palmer Invitational in March, while Cantlay produced one of the all-time great putting performances throughout the final day.

DeChambeau and Cantlay had earlier continued their birdie assaults on a near-defenceless Caves Valley layout in Baltimore, with both firing final-round 66s to post a remarkable leading score of 27 under par.

With Rory McIlroy, Sergio Garcia and Sungjae Im unable to keep pace with the final pairing, the tournament developed into a shootout between the top two, with Cantlay gaining the upper hand early on when he birdied four of the first five holes to open up a two-shot lead.

DeChambeau halved the deficit with a birdie at six, and the lead changed hands around the turn after Cantlay dropped a shot at the ninth before his rival birdied the 10th - the first of three in a row for the former US Open champion.

Cantlay valiantly matched DeChambeau's birdies at the 11th and 12th and pulled level again when he drained a superb 20-foot putt for a three at the 14th.

But DeChambeau then made a decisive birdie at the long 16th, where Cantlay did well to scramble a par-five only to come up short with his tee shot to the short 17th and find the water hazard.

His astonishing form on the greens continued as he rattled in an excellent putt for bogey which was enough to halve the hole when DeChambeau paid the price for a poor pitch and dropped his first shot of the day.

DeChambeau had one hand on the trophy when he followed a perfect 334-yard drive down the last with a flick of a wedge to 12 feet, with Cantlay over 20 feet away.

But Cantlay raised the roof when, having hit a great second from the rough, he knocked in his putt for his eighth birdie of the day to get back to 27 under, with DeChambeau's putt for the win drifting left of the target.

Back they went to the 18th tee, and DeChambeau played the hole in almost identical fashion although his putt for the win this time shaved the right edge of the hole, with Cantlay six feet away having pulled his approach into the left rough.

Again, Cantlay's metronomic accuracy with the putter extended the contest, but he then caught a seven-iron heavy from the middle of the 18th fairway a few minutes later before DeChambeau almost took the pin out with a smooth wedge which spun back to five feet.

Cantlay's birdie putt from close to 50 feet pulled up seven feet short, although he kept the pressure on his opponent when he inevitably rapped in the putt to save his par, and DeChambeau, who missed a putt from similar range for a 59 in round two, pulled his birdie try left once again.

The pair traded pars at the short 17th, where DeChambeau's 15-footer for the win lipped out on the left side, and his frustration escalated further when he blocked his drive back at the 18th, and his ball bounced into the stream to the right of the fairway.

But after Cantlay hit a safe second to 25 feet, DeChambeau regained his composure and pitched his third to four feet, converting the putt to save his par after Cantlay safely two-putted for a more conventional four.

The remaining galleries were treated to more phenomenal golf back at the 17th, where DeChambeau powered a 186-yard wedge to six feet before Cantlay smote an eight-iron to half that distance, and after four holes of being unable to buy a birdie putt, both buried their chances for twos.

With light fading, DeChambeau was again the closer of the two on the sixth extra hole - the 18th - only for Cantlay to nail a perfect 15-foot putt for birdie, and that proved enough to secure victory when DeChambeau's putt from 10 feet slid past the cup on the right.

Cantlay's victory, his second of the season having edged out Collin Morikawa in a playoff at The Memorial in June, also took him top of the FedExCup standings, and he can look forward to starting next week's Tour Championship on 10 under par, two shots ahead of Tony Finau.

And the 29-year-old also secured a Ryder Cup debut next month, claiming the sixth and final automatic qualifying berth for Team USA for next month's contest against holders Europe at Whistling Straits. Captain Steve Stricker will name his six wildcard picks on September 8.