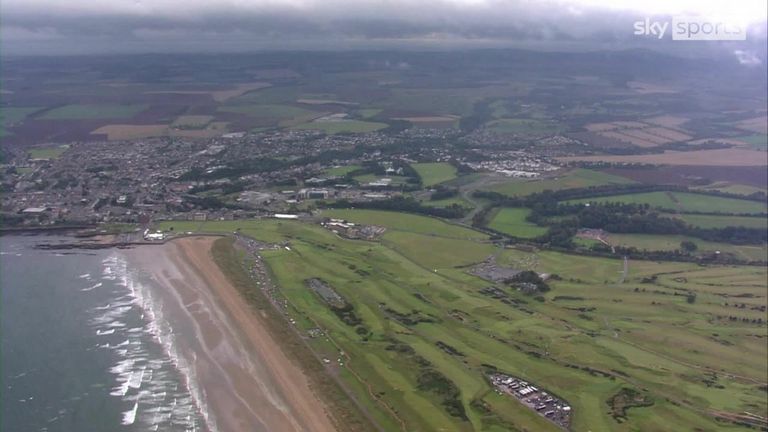 Danny Willett put himself in prime position to collect his first win in over two years as he opened up a three-shot lead at the Alfred Dunhill Links Championship.

Willett's handsome 66 on the Old Course at St Andrews swept the former Masters champion to 14 under, while Tyrrell Hatton bogeyed three in a row on the back nine to slip into a share of second place with Ryder Cup team-mate Shane Lowry.

British Masters champion Richard Bland joined the group at 11 under with an impressive 64, with Walker Cup star Jon Murphy also three off the lead heading into Sunday's final round.

Willett will be the man to catch after he mastered the cold, wet and windy conditions to get round the Old Course without a single blemish on his card, covering each half in 33 and powering to the top of not only the individual leaderboard, but also into a share of the lead in the Pro-Am competition with partner Jimmy Dunne.

"Early on, with a decent bit of wind, downwind, you always feel like you should take so many chances," said Willett, who has not lifted any silverware since upstaging the likes of Jon Rahm, Rory McIlroy and Patrick Reed to win the BMW PGA Championship in 2019.

"You need to drive it close, and as soon as you get on the 12th tee, you know you've got pretty tough conditions coming straight into the wind on the last six holes. I really had a go on the last six and gained a lot of shots coming in doing that.

"It's nice that the fans are back this week, the format is back, we missed it last year. I think it's great to have everyone here. We're getting cheered on, so it's great to be back on British soil. Another 18 holes to go, and we'll see how we do."

Hatton was looking good for a third victory at the Home of Golf when he made four consecutive birdies on the front nine to race to 15 under, but the Englishman lost his way after the turn with a number of errant shots in the worst of the conditions.

"Got off to a very nice start, and then just hit a couple of loose shots and just lost all momentum, to be honest," said Hatton. "I think from the eighth hole, we just never really got anything going our way. I think there were only a couple of times where I had a realistic birdie chance, and I hit a good putt, and it bobbled off line or whatever."

While Hatton remained in contention for a hat-trick of victories here, he was disappointed that he and father, Jeff, did not make the top 20 Pro-Am teams that will get another round at St Andrews on Sunday.

"It would be very special to win a third title here, but I actually haven't won with my dad, so it's a shame that we can't play again tomorrow," he added. "We haven't quite made it in the team event. That little run on the back nine seemed to hurt us, both of us. But obviously I'll go out there tomorrow and give it my best, and that's all you can do."

Lowry matched Hatton's four birdies in a row from the second, and he managed to get home in 36 for a round of 67 despite feeling the effects of a long and punishing week at Whistling Straits.

"There's a bit of fatigue," said the Irishman. "Obviously, it's a bit of calm now from last week to this week, but it's still a big tournament. I'm a competitive person. When I come to play, I want to do well. So, I'm out there giving it my all.

"I've managed to play some nice golf over the last three days, I'm in a nice position now going into tomorrow, and I look forward to it.

Daniel Gavins emerged as a likely 54-hole leader when he six under for the day at Kingsbarns and 15 under for the tournament, but the Englishman stumbled to a horrible 6-6-6 finish which included a scuff from the beach that disappeared into the unknown at the 16th.

Losing five shots in three holes saw Gavins tumble to 10 under, while Tommy Fleetwood is six shots off the pace after a quiet two-birdie 71 at St Andrews.