Andalucia Masters: Laurie Canter's 67 takes him three ahead of Matt Fitzpatrick in Spain 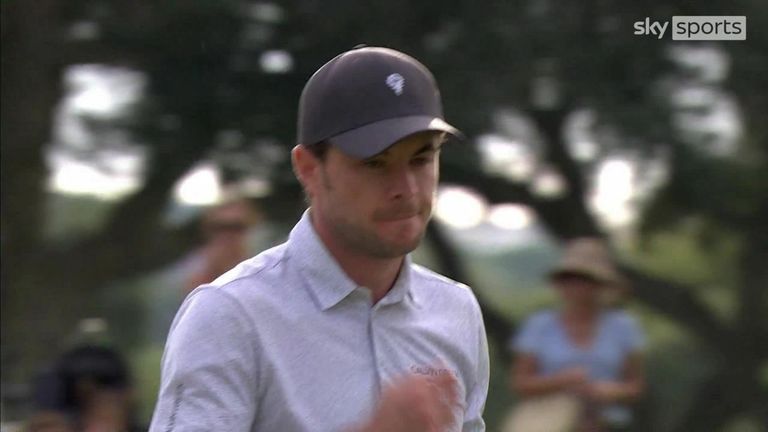 Laurie Canter gave himself another great opportunity to claim his maiden win as a professional as he edged three shots clear of Matt Fitzpatrick at the Estrella Damm NA Andalucia Masters.

Canter holed a superb putt on the final green for his eighth birdie of another arduous day at Valderrama, capping a 67 to jump to seven under with only nine players under the card through 54 holes.

Fitzpatrick did well to scramble a par at the last to complete a 70, while David Lipsky's outstanding 64 powered him 42 places up the leaderboard into outright third on three under par.

But Canter will be the man to catch on Sunday in Sotogrande as he looks to go one better than his five runner-up finishes, the most recent of which was at the flagship BMW PGA Championship last month.

And with patience and composure being key assets when negotiating such a firm and fast layout, Canter was delighted with his inner calmness that kept him on track after four dropped shots during his third round.

"I don't always have that, but it's something I actively try and work on - to be as level as I can be out there," said the 31-year-old when asked how he kept his temperament intact. "It helps on a course like this. You have to be.

"The score almost goes out the window at times, usually that's an indicator of how you feel. The course is asking a lot of different challenges and you can't dwell when it goes against you. I'm trying to stay as level as I can and I'm doing a good job.

"The golf course doesn't give you loads, and we all know there are opportunities to drop shots here. I think what it means is I can go out tomorrow and play how I have these last couple of days. The score I end up on will be competitive, I think, so that gives me a lot of confidence going in.

"Having said that, we know what the course is like. The last five or six holes today, the wind came up from nowhere and the finishing holes were really tough. It'll be interesting to see what happens with that tomorrow."

Fitzpatrick also displayed a composed demeanour in a solid performance in which he refused to be downcast after missing out on birdie chances on the outward half, turning in one over before getting his challenge back on course with three consecutive birdies to begin the back nine.

"Valderrama was a real test today, you had to be so patient," he said. "Early doors there wasn't much wind and a chance to make some birdies, but I didn't really do that. Then the wind picked up on the back nine and it was a case of sticking in there, so I'm really pleased with the way I grinded it out and I'm happy with the one under for the round.

"I said earlier in the week, the most important thing around here is patience. You can't chase anything, and you can't just get driver out and try and be aggressive. You've got to be sensible and it's more important to not drop shots than it is to make birdies.

"I'm excited to be in the final group tomorrow. The aim at the start of the week is to be up there. It doesn't get better than having a chance to win on Sunday. I'll go out there and enjoy it."

Fitzpatrick's Ryder Cup team-mate Bernd Wiesberger began his third round with a hole-out for an eagle-two at the first, and the Austrian went on to fire a 67 that moved him to two under with Renato Paratore, Sebastian Soderberg, Min Woo Lee and halfway leader Romain Langasque.

Edoardo Molinari's 66 got him into red numbers for the week, but Spanish Open champion Rafa Cabrera Bello's hopes of back-to-back wins in his homeland took a nosedive after a 73 left him nine shots adrift of the leader.

Final round coverage of the Estrella Damm NA Andalucia Masters will now commence earlier than scheduled. Tune in to Sky Sports Golf on Sunday from 11:30am.