PGA Tour: Hideki Matsuyama one ahead of Cameron Tringale at Zozo Championship

Matsuyama heads into the final round on 10 under and one ahead of Cameron Tringale; Matt Wallace four back and Tommy Fleetwood five behind - watch live on Sunday from 5am on Sky Sports Golf 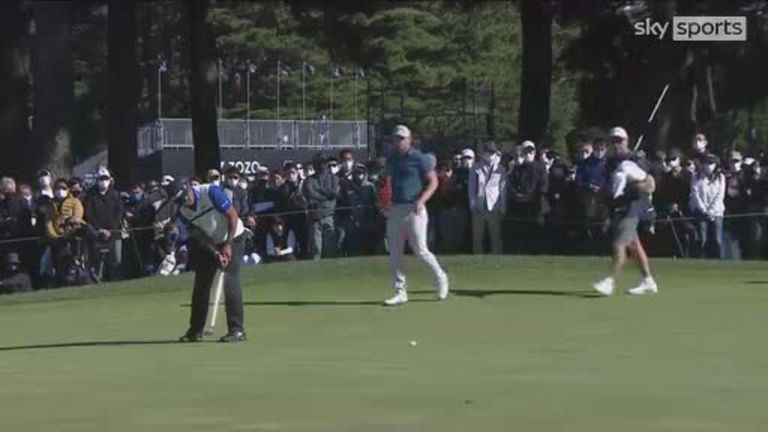 Hideki Matsuyama bogeyed his final hole to see his lead cut to one shot heading into the final round of the Zozo Championship.

The Masters champion dropped a shot at the par-five last to close a third-round 68 at Narashino Country Club, seeing him slip to 10 under and just one ahead of Cameron Tringale.

England's Matt Wallace heads into the final round four strokes off the pace in tied-third alongside Brendan Steele and Sebastian Munoz, while Tommy Fleetwood is five behind after a level-par 70.

Taking a one-shot lead into the weekend, Matsuyama rolled in a 10-foot birdie at the second but dropped a shot at the par-three fifth after finding water off the tee.

Matsuyama got up and down from off the green to pick up a shot at the par-five sixth and added another birdie at the ninth, seeing him reach the turn in 32, before ending a run of pars by holing a downhill putt at the 16th to briefly go three clear.

A two-shot swing at the par-five last saw Matsuyama make a bogey after a wayward tee shot and Tringale birdie from close-range, keeping the pair close together going into the final day in Japan.

Wallace mixed four birdies with as many bogeys to stay at six under, while Collin Morikawa made a chip-in eagle on the final hole to stay within six shots of the lad.

"Obviously I'm going to have to go make birdies tomorrow," Morikawa said. "Hideki's obviously not going to make a bunch of bogeys, but well see where the day ends. We always feel like were always within striking distance and just got to get off to a good start."

Only 23 of the 77 players are under par heading into the final day, while Olympic gold medallist Xander Schauffele is in tied-36th with Rickie Fowler and in the group on two over.

Who will win the Zozo Championship? Watch the final round live on Sunday from 5am on Sky Sports Golf!