Matsuyama's five-shot victory in Japan is his first worldwide title since winning the Masters at Augusta National in April; England's Matt Wallace finished tied-fourth and Tommy Fleetwood claimed a share of seventh

Hideki Matsuyama came through a final-round tussle with Cameron Tringale to secure an impressive victory on home soil at the Zozo Championship.

The Masters champion took a one-shot lead into the final day at Narashino Country Club but trailed Tringale with eight holes to play, only to produce a sparkling finish and secure his seventh PGA Tour title

Matsuyama picked up three shots in a five-hole stretch on his back nine and almost holed out for albatross with an incredible approach into the par-five last, setting up an eagle to close out an emphatic win. 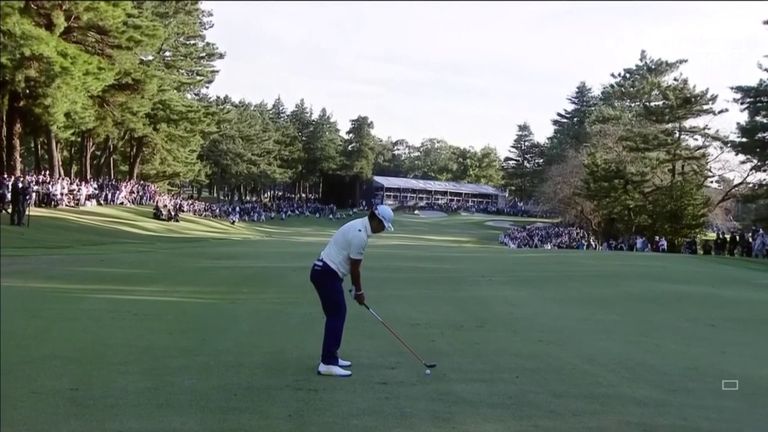 The world No 19 ended the week on 15 under and five ahead of Tringale and Brendan Steele, with England's Matt Wallace a further four strokes back in tied-fourth alongside Sebastian Munoz and Mackenzie Hughes.

Matsuyama opened with five straight pars before doubling his overnight advantage with a 50-foot eagle at the par-five sixth, where Tringale made birdie, while Steele charged up the leaderboard in the group ahead with four birdies in his opening seven holes.

The home favourite missed a short putt to save par at the eighth and found himself one behind when Tringale made back-to-back birdies around the turn, with Steele just a shot off the pace and also in contention.

Matsuyama responded by holing a long-range birdie at the 11th and converting from 12 feet at the 13th to reclaim his lead, with a 15-foot gain at the 15th giving him a two-stroke cushion over his playing partner.

Both Matsuyama and Tringale failed to get up and down to save par from off the 17th green, before Matsuyama's 240-yard approach into the 18th hole pitched inches from the cup and left him with a 10-foot eagle to seal victory in style.

Tringale bogeyed the par-five last to slip into tied-second alongside Steele, who saw cancelled out dropped shots at the 13th and 16th with birdies at the 14th and 18th to end the week on 10 under.

Wallace reached the turn within three of the lead after back-to-back birdies from the eighth but made two bogeys on his back nine, dropping him to six under, with Fleetwood a further shot back after successive rounds of 70 over the weekend.