Rory McIlroy: 'Monumental effort' from Tiger Woods to make cut; nerves not a factor in second-round 71

Rory McIlroy was clubhouse leader overnight on five under, but is five shots off the lead at the halfway mark at Southern Hills after a second-round 71; "Maybe it was a case of I wasn't quite as committed or aggressive as I was yesterday" 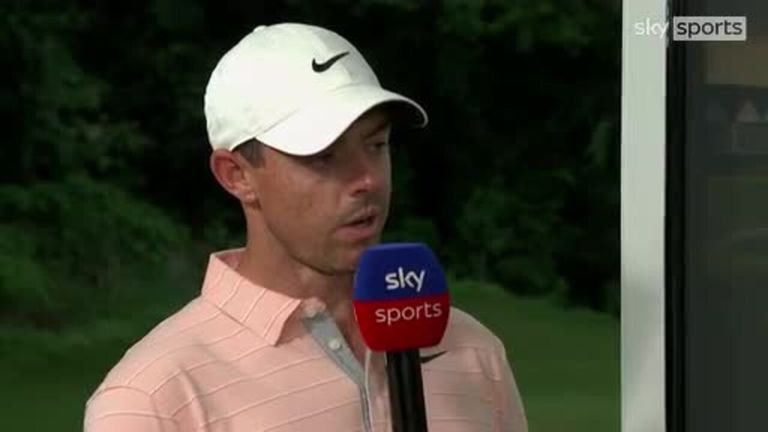 Rory McIlroy denied that nerves got the better of him as he carded a second-round 71 to drop to four under, five shots off the lead at halfway stage of the PGA Championship in Southern Hills.

McIlroy held the clubhouse lead at five under overnight but by the time he teed off, that had been taken by Justin Thomas (-6), with Will Zalatoris (-9) then stretching ahead after carding a bogey-free 65.

McIlroy, meanwhile, lost further ground as he dropped a shot at the second and three-putted for bogey at the seventh.

The two-time PGA champion recovered somewhat on the back nine, registering a first birdie of the day when holing a putt from 10 feet at the 12th, with a run of pars down the closing stretch leaving him on four under alongside Abraham Ancer and Davis Riley.

"I didn't get off to the best of starts," McIlroy told reporters. "That bogey on two, and then, from there, I didn't give myself enough realistic chances for birdies.

"After that, I played solidly on the way in; to play the last 11 holes one under was respectable, not to make another bogey.

"I gave myself a few more chances on the back nine and just couldn't quite capitalise on a couple of them. But those up-and-downs on 16, 17, and 18 I think were really important. It just keeps me a little closer to the lead and doesn't really feel like I've got such a mountain to climb as if I had have maybe dropped one or two over those last three holes.

When asked if nerves played a factor in his underwhelming round compared to Thursday, McIlroy answered: "No, I don't think so. I felt pretty relaxed out there.

"I wouldn't say it was nerves. You're not going to go out and shoot 65 every day.

"Maybe it was a case of I wasn't quite as committed or aggressive as I was yesterday."

McIlroy has played alongside Jordan Spieth (+1) and his hero Tiger Woods (+3) during the first two days in Tulsa, with Woods particularly impressive on Friday in carding a one-under round to ensure he made the cut - a remarkable feat in just his second tournament back since almost losing a leg after being involved in a car crash last February.

"Just unbelievable," McIlroy said of Woods' effort. "Making the cut at Augusta and making the cut here; I was joking with Joey LaCava [Woods' caddie] yesterday and saying, he could have come back and played two of the flattest courses on Tour, but no he comes to two of the toughest walks that we have.

"Just incredibly resilient and mentally tough. To get a front-row seat - he's feeling it, on every swing - to see what he did on that back nine.

"It was a monumental effort."