Tyrrell Hatton top-placed Englishman on two under, with Justin Rose three over after nightmare start to round in North Carolina - watch day two of Wyndham Championship live on Sky Sports on Friday (via red button from 11.45am, then on main channel from 8pm) 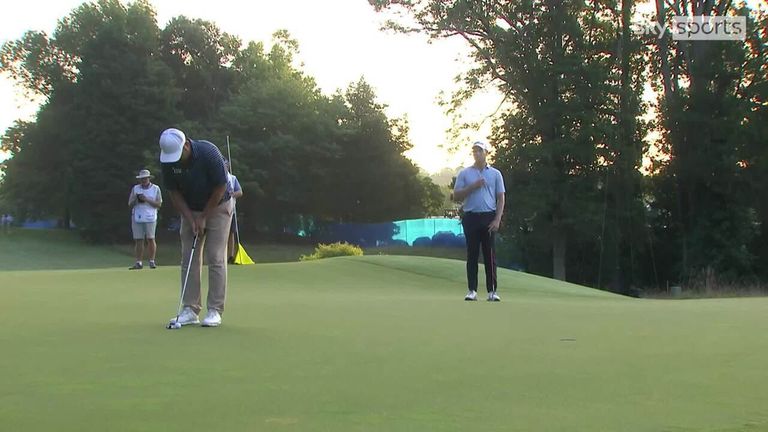 John Huh surged into the lead on the opening day of the Wyndham Championship with a nine-under 61, his best round on the PGA Tour, giving the American a two-stroke advantage over Sungjae Im.

Huh - who won his sole PGA Tour title to date a decade ago at the Mayakoba Golf Classic - drained a 36-foot eagle putt on the 15th hole and also notched seven birdies in a blemish-free round.

The 32-year-old reeled off five birdies in a row between the fourth and eighth holes at Sedgefield County Club in Greensboro, North Carolina as he made a superb start in his bid to secure a FedEx Cup play-off berth.

Huh is 120th in the FedEx Cup standings and only the top 125 will progress into the post-season and guarantee a full PGA Tour card next season.

Speaking about his round, Huh said: "I wasn't really feeling great with my game so to shoot my career low, it's kind of weird. [I have] sort of mixed feelings, but I'll take this any day."

Im's seven-under 63 featured two eagles, four birdies and a solitary bogey with the South Korean one shot better off than Huh's fellow Americans Peter Malnati and Brendan Wu, who are tied for third on six under.

Austin Smotherman is part of a big group on five under in what is a huge week for him - Smotherman is 135th in the FedEx Cup but would count as 125 if he stayed in that spot with 10 players ahead of him suspended for signing on with LIV Golf.

Tyrrell Hatton is the highest-placed Englishman on two under, with Luke Donald - recently announced as Europe's new Ryder Cup captain for the 2023 event in place of Henrik Stenson - at even par.

Justin Rose made a horror start after beginning on the back nine, struggling to a five-over 40 with four bogeys - including two on his first two holes - and a double-bogey interspersed with a sole birdie.

However, the 41-year-old fought back later in his round, with two birdies across his final nine holes to end the day on three over.

Watch day two of the Wyndham Championship live on Sky Sports on Friday (via red button from 11.45am and then on main channel from 8pm).