Keegan Bradley wins fifth PGA Tour title of his career and first since 2018 with one-shot triumph over Rickie Fowler and Andrew Putnam at Zozo Championship in Japan; overnight leader Fowler fades and remains without a victory on the PGA Tour since February 2019 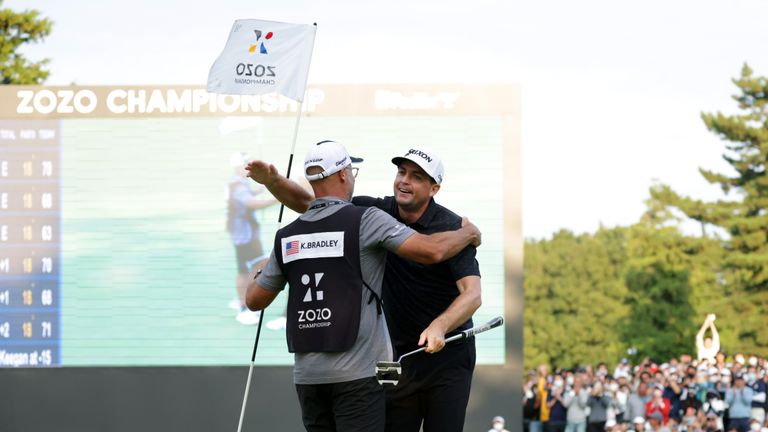 Bradley - previously winless since the 2018 BMW Championship - shot a two-under-par 68 to end on 15 under for the tournament and scoop close to $2 million.

It is closing in on four years since Fowler claimed the most recent of his five PGA Tour successes - the Waste Management Phoenix Open in February 2019.

The 33-year-old led Bradley by two strokes and Putnam by one going into the final round and the trio each headed the field during different stages of Sunday's action.

Bradley surged two clear following a 20-foot birdie putt at the 11th before Putnam moved level with his countryman at the 16th.

However, Bradley - the 2011 PGA champion - re-established a two-stroke advantage at the 17th as he bagged a birdie and Putnam recorded a bogey.

Putnam's birdie on the last was not enough as Bradley made par to earn a fifth PGA Tour crown.

Bradley said afterwards: "It's why I practice so hard. Things aren't easy for me normally, so the birdie on the 17th was one of the best holes of my life.

"This is so special. I played in the final group here when Tiger Woods won here [in 2019]. I'm so proud to win this tournament."

Fowler's hopes of a sixth PGA Tour victory faded when he bogeyed the 15th before wasting a birdie chance at the next with another disappointing putt.

He did birdie the 18th, though, to finish tied for second with Putnam - one shot ahead of Emiliano Grillo (13 under) and two above Viktor Hovland, Sahith Theegala and Hayden Buckley (12 under).