Maguire had four-straight birdies around the turn and added another pair late on to join Lydia Ko on 15-under in pursuit of $2 million prize pot; Watch the final round live on Sunday from 7pm on Sky Sports Golf and - for free - on the Sky Sports Golf YouTube channel 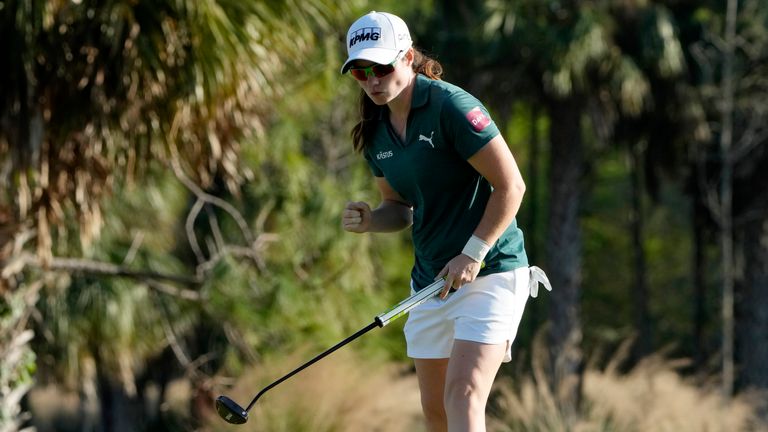 Leona Maguire of Ireland carded a nine-under 63, allowing her to catch Lydia Ko for a share of the lead after three rounds of the CME Group Tour Championship in Florida and set up a thrilling final-day duel for the richest prize in women's golf.

Maguire, one of 11 first-time winners on the LPGA Tour this year, had four-straight birdies around the turn and added another pair late on in her stunning round that has catapulted her into contention for the $2 million prize pot at Tiburon Golf Club.

Her main contender for the cash, Ko, had a five-shot lead to start the third round - seven shots ahead of Maguire - but a mixture of birdies and bogeys stalled her round. She fell one shot behind Maguire at one stage until chipping to tap-in range on the par-five 17th on her way to a round of 70.

The forecast for Sunday's final round is for rain and 20 mph gusts of wind. "Nothing I'm not used to from Ireland," Maguire said when she finished her round.

"Ultimately just got to go out and play as well as I possibly can, and especially if there's bad weather, that's all you can control. Looking forward to one last walk of the season tomorrow."

Maguire and Ko have a five-shot advantage over former US Women's Open champion, Korea's Jeon-Geun Lee, and Scotland's Gemma Dryburgh.

Elsewhere, Brooke Henderson kept her slim hopes alive for player of the year. The Canadian, who had to withdraw last week with a back injury, had two eagles in her round of 65 and was at nine-under, six behind the leaders.

Henderson will have to win the CME Group Tour Championship and have Ko finish third or worse to win player of the year.

Watch the final round of the LPGA Tour's CME Group Tour Championship on Sunday from 7pm, live on Sky Sports Golf and - for free - on the Sky Sports Golf YouTube channel.