Tiger Woods missed the cut in a third successive major for the first time in his career at the rain-affected 97th PGA Championship.

The former world No 1 carded a one-over-par 73 in the second round at Whistling Straits, leaving him two strokes outside the cut line of two over.

Woods had already missed back-to-back cuts in major championships for a first time as a professional when falling short in both the US Open at Chambers Bay and the Open at St Andrews, and his performance in Wisconsin left him with another low in a miserable year.

Follow our blog from the third round at Whistling Straits

"I hit it good enough to be where I needed to be, but I putted awful,"  said Woods, who was 17th in the Masters in April but is a combined 22 over par for this year's major championships.

"I finally figured something out today on the putting green, but the damage had already been done. Finally rolled the ball coming in and unfortunately it was too little, too late."

Asked how much it hurt to make early exits from the last three majors, Woods added: "It's frustrating to miss any cuts because any time you miss a cut, you don't have a chance to win the event. 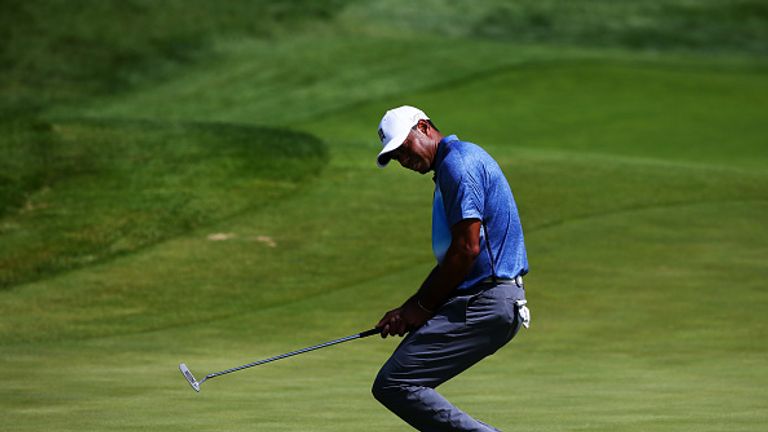 I hit it good enough to be where I needed to be, but I putted awful

After a thunderstorm forced play to be suspended on Friday evening, Woods entered next week's Wyndham Championship, the last regular PGA Tour event before the FedEx Cup play-offs.

However, the 14-time major winner, who has plummeted to 278th in the world rankings, would need to win at Sedgefield Country Club to qualify for the first play-off event and said he is not certain to compete in North Carolina.

"I'll go through with my team, we'll talk about it, what I need to do and see if that's the right move or not," the 39-year-old added. "We'll decide in the next couple of days.

"Unfortunately, I'm missing out on...potentially missing out on the play-offs. But I still have a lot of golf left. We have got some other tournaments that I'm going to be playing in, plus overseas events.

"The confidence is growing quickly. That's the fun part. I'm hitting shots and able to hit shots that I haven't been able to hit in years and that's nice again. And to have the control that I need to have going forward, it's starting to come back, which is nice.

"I just need to get more consistent in tournament golf. Only way you can do that is by playing, and as I said, I have a lot of golf to be played around the world."

Australian Matt Jones holds a two-shot lead over compatriot Jason Day in Round 3 of the PGA Championship, live on Sky Sports 4.