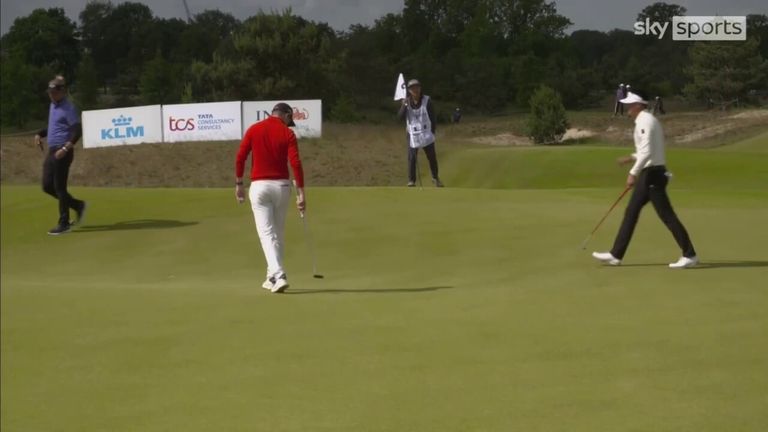 England's Matt Wallace moved into contention at the halfway stage of the Dutch Open as he chases a first tour victory since 2018.

A five-under 67 on day two gave Wallace a halfway total of eight under par, leaving him two shots behind Portugal's Ricardo Gouveia, whose 66 late in the day saw him take a one-shot lead over China's Li Haotong.

Li had earlier climbed 70 places on the leaderboard thanks to a superb nine-under 63 which included an eagle and eight birdies and a front nine - the back nine of the course - of just 29 shots.

Wallace came into the week having missed the cut in eight of his last nine starts and without a win since making an impressive - if ultimately unsuccessful - case for a Ryder Cup wild card in 2018 with three victories in 15 events.

The 32-year-old, whose second round contained six birdies and a bogey, said: "I have had a really good mental attitude this week.

"It is all about executing the shot for me - the swing, seeing it and executing it. (It's about) positivity, not talking bad about myself or a shot; putting more energy into the good shots rather than the bad shots,

"If you hit a bad shot, you are allowed to let that frustration out but then don't give it any energy or any thought."

Li said: "Obviously I had a hot start, my putting was very hot. I holed a lot of long putts and the game has been slowly coming back.

"With this course, if you are off a little bit, it's so easy to have a bogey, so today I put every ball in safer places and created a lot of birdie chances from there.

"I need to be myself and stay calm, and hopefully I can shoot another couple of rounds like this."

Joost Luiten, seeking a third victory in his home tournament, was the overnight leader after a first-round 65 but shot 10 strokes more on Friday to drop off into a share of 19th place.

Watch day three of the Dutch Open live on Sky Sports Golf from 12.30pm on Saturday.