Tiger Woods and his 11-year-old son Charlie finished seventh in their PNC Championship debut, as Justin Thomas and his dad Mike claimed a one-shot victory after a final-round 57 under the scramble format. 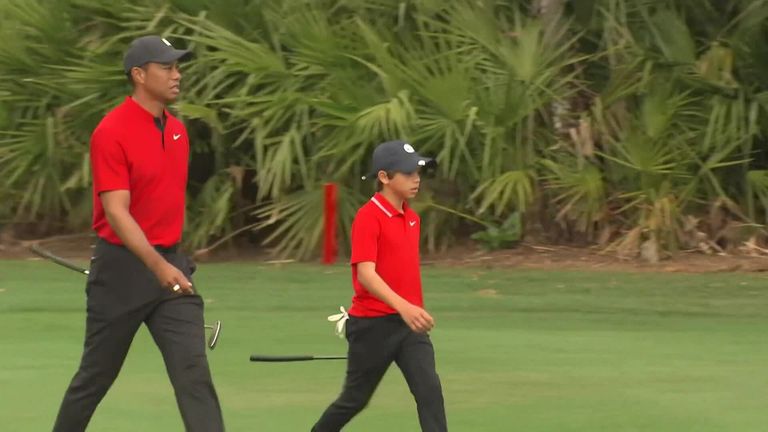 Justin Thomas and his father Mike claimed a one-shot victory at the PNC Championship, where Tiger Woods and his son Charlie finished five off the pace.

Team Thomas birdied 15 of their 18 holes in the scramble format, where teams select their preferred tee shot to both play their next shot from, to card a final-round 57 at Ritz-Carlton Golf Club and end the week on 25 under.

Vijay Singh and son Qass claimed second spot in the 20-team event, only for majors winners or Players champions to compete alongside a member of their family, with Mark O'Meara's team in share of third alongside Lee Trevino and his son Daniel.

Overnight leaders Team Kuchar ended in tied-fifth, while Woods joined forces with his 11-year-old son to card a second successive 62 in the 36-hole event and end the week in seventh place.

"Memories we'll have for our entire lives," Woods said. "He [Charlie] Is not going to appreciate this at 11 years old. I didn't when I was with my dad. As the years go by, you start appreciating it more." Team Thomas - starting the day four off the pace - birdied their opening seven holes and followed three straight gains from the ninth by adding four more in a row from the 13th, before Thomas Snr rolled in a five-foot birdie at the last to set the winning total.

"This is a real highlight and the most normal part of this crazy year and we had so much fun out there," Thomas Jnr said. "My dad played great today and made a lot of putts which made it easy on me."

Team Singh carded a 12-under 60 and Team Trevino joined Team O'Meara in posting final-round 59s, while the Woods duo - wearing the signature Sunday red and black - jumped up the leaderboard with a strong finish to their Sunday.

Team Woods were four under for their round with six holes to play but birdied the 13th and eagled the par-five next, before closing with three birdies over the final four holes to finish on 20 under.