Jason Kokrak posted a final-round 70 to claim a two-shot victory over Jordan Spieth at the Charles Schwab Challenge; Ian Poulter ends the week in a four-way share of third thanks to a two-under 68 in Texas 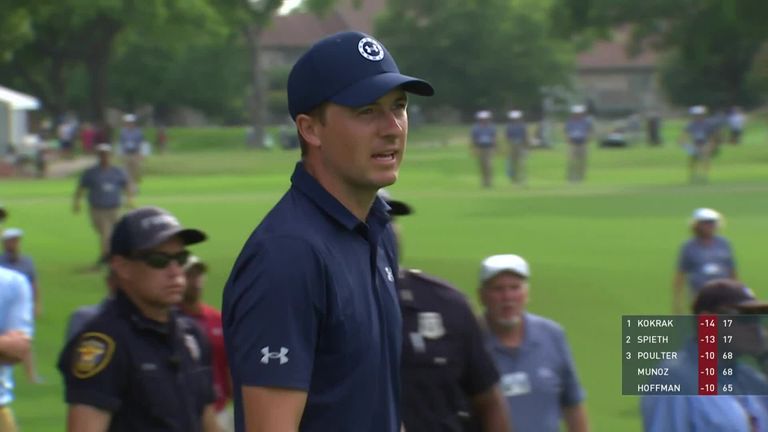 Jason Kokrak came through a final-round tussle with home favourite Jordan Spieth to claim a narrow victory at the Charles Schwab Challenge in Texas.

The pair played together in the final group and exchanged the lead on numerous occasions during a gripping Sunday at Colonial Country Club, where a level-par 70 was enough for Kokrak to claim a two-shot victory and second PGA Tour title.

Kokrak's victory moves him to fifth in the FedExCup standings and is his second win of the season, following his breakthrough success at The CJ Cup last autumn, while Spieth was left having to settle for second after struggling to a final-round 73.

Starting the day one ahead, Spieth saw his advantage doubled with a par at the par-five first when Kokrak opened with a bogey after taking two attempts to get out of a greenside bunker.

The former world No 1 bogeyed his next two holes to fall back into a share of the lead and missed a five-footer to save par at the fourth, where Kokrak also dropped a shot, only for Kokrak to edge back ahead with a 20-foot birdie at the fifth.

Kokrak holed from 10 feet to match Spieth's birdie at the sixth and cancelled out a bogey at the next with a six-foot birdie at the par-three eighth, with Spieth then firing his approach at the ninth to tap-in range to take the pair back tied for the lead.

Momentum swung back in Kokrak's favour when he birdied the 11th and took advantage of just missing the water off the 13th tee to convert a 15-footer from the fringe, taking him two ahead, with Spieth making a seven-footer at the same par-three to avoid slipping further behind.

Spieth was forced to lay up from the rough after a wayward tee shot at the 15th and dropped another shot, only for Kokrak to three-putt from long range and then fail to get up and down from the sand at the next to register back-to-back bogeys.

Both players scrambled pars at the 17th to keep Kokrak one ahead going to the par-four last, where Spieth found the water on his way to a closing bogey and allow Kokrak to complete his victory with a two-putt par.

Ian Poulter nailed 30-foot birdies on both his last two holes to a close a two-under 68 and jump to 10 under, leaving the English tied-third with Charley Hoffman, Patton Kizzire and Sebastian Munoz.

A final-round 76 dropped Sergio Garcia back to four under and in the group tied-20th that also contains Ryder Cup teammate Justin Rose, while Justin Thomas - the highest-ranked player in the field - bogeyed three of his final four holes to sign for a closing 69 and finish in a share of 40th.