A six-under 64 helped Russell Henley to a four-shot lead at the Wyndham Championship; Justin Rose five off the halfway lead as he chases spot in FedExCup Playoffs - watch throughout the weekend on Sky Sports Golf. Russell Henley has built up a commanding halfway lead at the Wyndham Championship, as Justin Rose bolstered his hopes of securing a spot in the FedExCup Playoffs.

Henley followed an opening-round 62 with a six-under 64 at Sedgefield Country Club, mixing seven birdies with a lone bogey to get to 14 under and pull four clear of the chasing pack.

Olympic silver medallist Rory Sabbatini lies in tied-second alongside Webb Simpson and Scott Piercy, while Rose is in the group five off the pace on nine under as he looks to break inside the top-125 and extend his season. 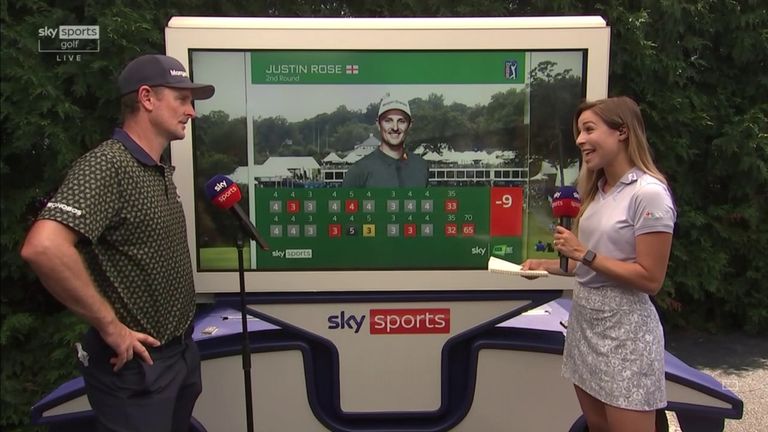 "Very happy to obviously back up yesterday's solid round," Rose said. "I was aware of all the good scores that came from yesterday. Getting out there on the golf course, it didn't feel quite as easy as I maybe thought it was going to be."

Overnight leader Henley also started at the 10th and responded to missing a five-footer to save part the 12th by making a 20-footer at the 14th for the first of four consecutive birdies.

Henley added birdies at the third and fifth before increasing his advantage to four strokes with a penultimate-hole gain, while Simpson played his last five holes in five under to card a second successive 65 and get to 10 under.

Beginning on the back nine, Rose saw a 10-foot birdie at the 13th cancelled out by a bogey at the next before the Englishman holed a 12-foot eagle at the 15th and picked up a shot at the 17th to turn in 32.

Rose birdied the second and took advantage of the par-five fifth to get to nine under, with the former FedExCup champion alongside Tyler Duncan, Brian Stuard and Kevin Streelman in tied-fifth.

Tommy Fleetwood - requiring a top-10 finish to have a chance of extending his season, is tied-23rd for the tournament after a second-round 68, while Scottish duo Russell Knox and Robert MacIntyre are both in the group on three under.