Kevin Kisner came through a six-man play-off to secure a fourth PGA Tour title at the Wyndham Championship; Justin Rose narrowly misses out on spot in FedExCup Playoffs after a tied-tenth finish in North Carolina 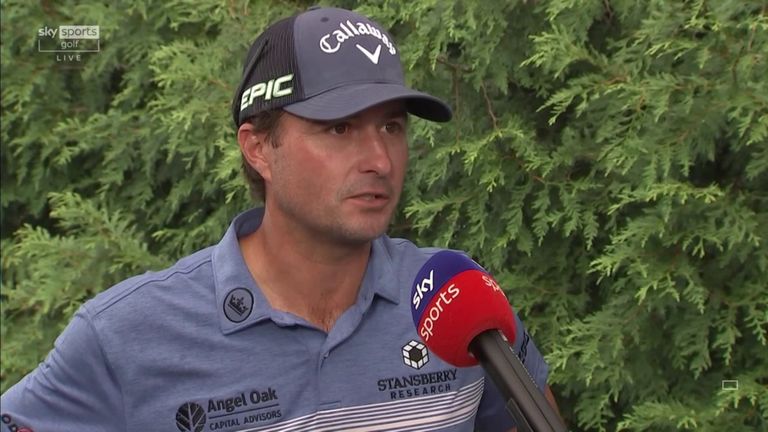 Kevin Kisner ended his terrible record in play-offs on the PGA Tour to secure a dramatic victory in extra holes at the Wyndham Championship.

The American birdied two of his final three holes to post a four-under 66 at Sedgefield Country Club and end the week on 15 under, putting him in a six-way tie at the top of the leaderboard alongside Si Woo Kim, Roger Sloan, Adam Scott, Kevin Na and Branden Grace.

All six players made par on the first extra play-off hole, before Kisner - who had never won in his five previous play-off appearances on the PGA Tour - rolled in a winning birdie at the second extra hole to claim a fourth PGA Tour title and a first since the 2019 WGC-Dell Technologies Match Play.

His first playoff win in dramatic fashion. @K_Kisner comes out on top in extra holes.

Kisner started the day four behind but raced into contention after following an opening-hole birdie with three straight gains from the fourth, only to make a three-putt bogey at the eighth and drop another shot at the par-four 14th.

The world No 52 rolled in a 12-foot birdie at the 16th and fired his approach to tap-in range at the par-four next, taking him to 15 under, with a five-foot par-save at the last ensuring he would be part of the joint-biggest play-off in PGA Tour history.

Scott mixed eight birdies with three bogeys on the final day to join the logjam at the top and Grace holed a 30-footer at the last, while Sloan birdied two of his last three holes, Kim carded a six-under 64 and Na made a final-round 66 to complete the six-way tie at the top.

The players all returned to the par-four 18th for the first extra hole, where Scott fired a stunning approach to inside five feet but missed the birdie putt for the outright victory.

Na holed a 20-footer to save par after finding the sand with his approach and Sloan - the only player other than Scott to find the green - posted a two-putt par, while the other three all got up and down from off the putting surface to make their fours to extend the contest.

Kisner then struck a delightful approach to four feet on the second extra hole, again taking place on the 18th, before rolling in the birdie to end a 29-month winless run and move inside the top-30 in the FedExCup standings.

Overnight leader Russell Henley missed a four-foot putt on the final green to fall a shot outside the play-off places, with Webb Simpson and Kevin Streelman also claiming a share of seventh.

A three-putt bogey on the final green saw Justin Rose end the week tied-tenth and narrowly miss out on breaking into the top-125 in the FedExCup standings, with a three-under 67 seeing him fail to qualify for the Playoffs for the first time in his PGA Tour career.

Chesson Hadley snatched the 125th spot in the rankings after an incredible finish to his round, where a hole-in-one at the par-three 16th helped him to a round-of-the-day 62 and a share of 15th place.