Will Zalatoris overcomes Sepp Straka in a play-off after the pair finish tied on 15 under after 72 holes; overnight leader JJ Spaun sees his challenge fade badly on the final day, carding a 78; Cameron Smith's bid to become world No 1 fails after incurring a two-shot penalty 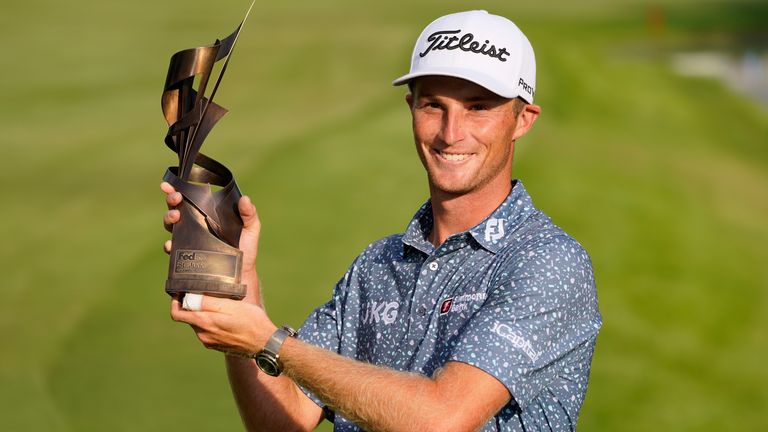 Will Zalatoris claimed a maiden PGA Tour title, edging out Sepp Straka in a play-off to win the FedEx St Jude Championship.

Zalatoris and Straka could not be separated after 72 holes, finishing in a tie for first on 15 under, with the eventual winner holing a clutch eight-footer on the 18th to save par and help force a play-off.

The pair both made par twice more on the 18th for the first two holes of the play-off - Zalatoris sinking another long putt second time round to stay in it - before moving to the par-three 12th for the third, where both were forced to take drops after wayward tee shots.

Zalatoris flirted with the water, only for his ball to remarkably stay on the rocks just off the fringe of the green, while Straka was not so fortunate. Ultimately, Zalatoris was forced to take a drop anyway due to being confronted with a near unplayable lie.

Straka then found the back-side bunker from the drop zone, opening the door for Zalatoris, who got up and down in two to clinch his first PGA Tour title after a string of near misses, particularly in the majors.

The 25-year-old American was edged out by Justin Thomas in a three-hole play-off for the PGA Championship earlier this year, while he also came out on the wrong side of a ding-dong final-day battle with Matt Fitzpatrick at the US Open, finishing in a tie for second. Zalatoris also finished as runner-up to Hideki Matsuyama in the 2021 Masters.

"It's kind of hard to say 'about time' when you're in your second year on Tour but [it's] about time," Zalatoris said.

"Considering all the close finishes that I've had this year, to finally pull it off means a lot."

JJ Spaun, who had held a one-shot lead overnight over Straka, saw his challenge fade badly on the final day, the American carding a 68 to ultimately finish way back off the pace at five under.

Meanwhile, Australian Cameron Smith, who would have become world No 1 with a win, suffered a sizable blow even before his final round got under way.

The 28-year-old seemingly carded a third round of 67 to see him sit just two shots behind Spaun, only for a two-shot penalty to be added to his score for playing from the wrong place on the fourth hole of his third round.

Footage posted on social media showed Smith's ball was on the red line marking the penalty area on the par-three after he had taken a drop.

Smith, who won the Players Championship in March and his first major title in the 150th Open at St Andrews, failed to recover from the penalty, carding an even-par final round of 70.