Jon Rahm shares the lead with Davis Thompson after three rounds of The American Express in California, with Christiaan Bezuidenhout tied-third alongside J.T Poston; Watch the final round on Sunday live from 4.30pm on Sky Sports Golf 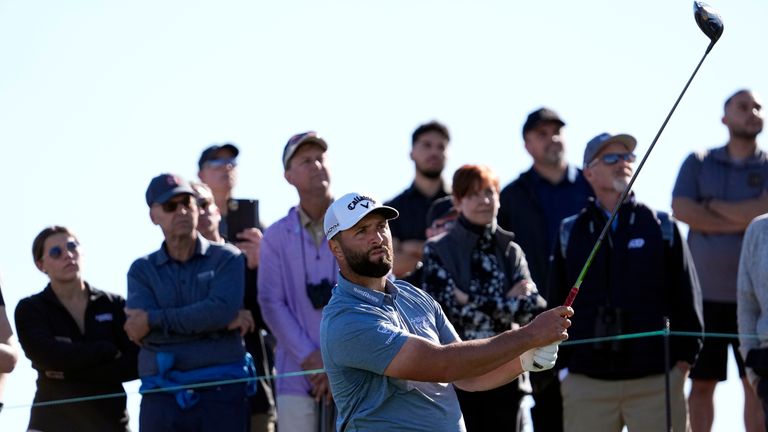 Jon Rahm bolstered his hopes of securing a fourth worldwide win in six starts by moving into a share of the lead heading into the final round of The American Express in California.

Rahm followed back-to-back 64s over the first two days with a seven-under 65 on the PGA West Stadium Course on Saturday, one of three courses used, taking the former US Open to champion to 23 under and level with overnight leader Davis Thompson at the top of the leaderboard.

The Spaniard, who claimed the Open de Espana and DP World Tour Championship late last year on the DP World Tour before starting his PGA Tour campaign with Sentry Tournament of Champions victory earlier this month, is looking to add a second LA Quinta title to his winning streak.

"If we get this weather again I'm going to have to shoot most likely 66 or lower to have a good chance to win," Rahm said. "But that's the challenge. The level of talent on this tour is only increasing."

Rahm followed back-to-back birdies from the third by holing a 15-foot eagle from the fringe at the fifth after a brilliant approach into the par-five, then jumped into top spot after a run of three consecutive birdies from the eighth.

The world No 4 moved eight under for his round when he drained a 25-foot birdie at the 12th but stuttered along the closing stretch, missing three birdie chances from inside 10 feet and three-putting the par-three 17th, which allowed Thompson to move alongside him in a share of the lead.

Thompson went into the weekend with a two-shot advantage and followed four birdies on his front nine with a tap-in at the 12th, then cancelled out a three-putt bogey at the 14th by taking advantage of the par-five 16th to stay in the running for a maiden PGA Tour title.

"I feel like I don't have anything to lose in my rookie year, so can just kind of freewheel it," Thompson said. "I'm excited to play with Jon [Rahm]. He's obviously a top-five player in the world. I'm excited about the challenge and just looking forward to (Sunday)."

South Africa's carded a bogey-free 62 on the Nicklaus Tournament Course to jump within four of the lead and into tied-third alongside J.T Poston, who made a six-under 66 at La Quinta Country Club, with Harry Higgs in the group sharing fifth spot after registering 12 birdies in a third-round 62.

Higgs is joined on 18 under by Sam Burns, Taylor Montgomery and South Korea's Tom Kim, with Dylan Wu a further shot back in the six-way tie for ninth after a round-of-the-day 61 on the Nicklaus Course.

World No 2 Scottie Scheffler and Sungjae Im are also in the group on 17 under, while England's Justin Rose dropped 40 places during the third round after a level-par 72 on the Stadium Course kept him on 11 under.

Who will win The American Express? Watch Featured Groups live on Sunday from 4.30pm on Sky Sports Golf ahead of full coverage from 8pm.