American Lexi Thompson defied the difficulty of The Olympic Club to card a bogey-free 66 which earned her the 54-hole lead at the US Women's Open. Watch Sunday's final round live on Sky Sports Golf. 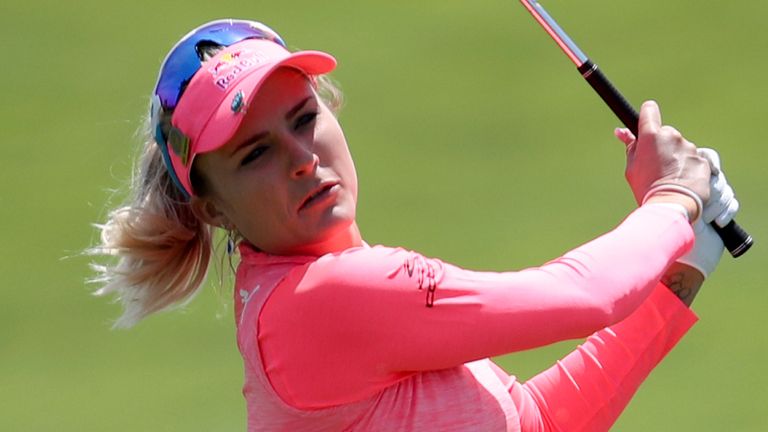 Lexi Thompson powered into the lead at the US Women's Open after firing the first bogey-free round of the week at The Olympic Club in California.

Thompson's superb five-under 66 swept her to seven under par for the tournament and one ahead of Yuka Saso, with only seven players completing 54 holes under the card.

In her 15th appearance since making history when she competed in the 2007 edition aged just 12, Thompson cruised to the turn in 32 when she holed from 20 feet for birdie at the ninth, and she picked up further shots at 14 and 17 to claim the outright lead.

"I struck it well all day, and made a few good putts out there," said the 26-year-old, who is without a win in two years and hasn't added to her lone major championship victory at the ANA Inspiration in 2014.

"It's all about patience out on this golf course because there's going to be bad shots made and you're going to miss some fairways, so you just have to get bogey at worst and get off the hole and go on to the next.

"It's tough, the rough is super thick. They say that there's a first cut, but the first cut's about four inches. But it's just a great golf course. That's how major championships should be. They should be longer, with the rough up thick, and it's held up to its standards of being out there.

"So I played solid today and I'm just going to try to take it into tomorrow and just focus on one shot at a time.

"It feels great. I have been working extremely hard in my off weeks that I do get, so it's good to see the hard work paying off. But I have one more day ahead so just going to take it one shot at a time, it's going to be a long day and see where it goes."

Saso appeared set to maintain the lead she held at the halfway stage when she birdied the 10th to get to eight under, but she dropped shots at 13 and 14 before getting one back at the long 17th, only to bogey the final hole.

Teenage amateur Megha Ganne remained in contention after a battling 72 left her only four behind entering the final round along with Jeongeun Lee6, who returned a 73.

Shanshan Feng, Nasa Hataoka and Megan Khang are the only other players in red numbers after three rounds, while Mel Reid's hopes of a major breakthrough evaporated after she struggled to a disappointing 78 to slip out of the top 20 on five over par.