Blake Harrison: Actor on his love of MMA and what he is looking forward to in 2022 for the UFC

Harrison spoke to Sky Sports about his interest in MMA and what he is looking forward to in 2022 for the UFC; he believes a fourth meeting between Conor McGregor and Dustin Poirier would be an appealing prospect for fans 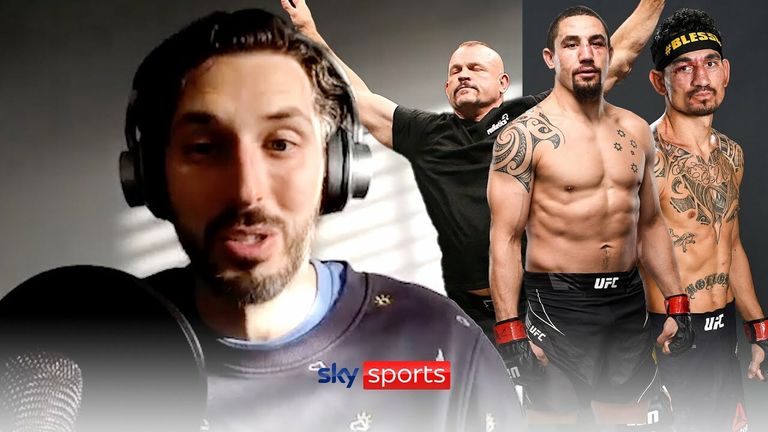 Blake Harrison talks to Sky Sports' Nik Hobbs about how he became an MMA fan, his favourite fighters and what he expects from 2022

“Everything you watched growing up in the '90s had an element of fighting and martial arts in it,” says Inbetweeners star Blake Harrison as he tells Sky Sports where his love of MMA began.

The actor, 36, presents The MMA Fan Podcast with co-host Stu Whiffen, which has featured UFC featherweight champion Alexander Volkanovski, Tyron Woodley, Dan Hardy and Marc Goddard - but Harrison says he was "always interested in [Jean-Claude] Van Damme movies", and that MMA's resemblance to such productions got him interested him in the sport.

"Once I was aware of MMA around the time of Chuck Liddell and Matt Hughes… that was probably the closest thing I've ever seen to being a real version of those movies that I loved as a kid."

Harrison says his interest in MMA was consolidated by the reality television series, The Ultimate Fighter. The show has served as a platform for several fighters to launch their careers, including UFC Hall of Famers Forrest Griffin and Michael Bisping, as well as perennial fan favourite Nate Diaz.

"I tuned into The Ultimate Fighter years down the line - I think it was the Jon Jones vs Chael Sonnen series… and I was hooked on the personalities. I really enjoyed Chael Sonnen, I thought he was great fun."

Sonnen is renowned as one of the most notable trash-talkers within MMA, and recently took aim at global superstar Conor McGregor, labelling the Irishman as 'a rich little weirdo'.

McGregor is also a notorious trash-talker and Harrison believes the former UFC featherweight and lightweight double-champion will always attract an audience, especially if he clashes again with Dustin Poirier.

"Conor will probably come back, won't he?" says Harrison.

"Conor vs Dustin IV maybe! Regardless of what you think of that fight and whether you think Conor is going to be outgunned, that's a fight we're all going to get up for."

Harrison has "loved every single minute" of producing The MMA Fan Podcast, a project that came about after a conversation he had with Stu Whiffen following an appearance on the latter's podcast, Off the Beat & Track.

The show has featured celebrity guests such as Lee Mack, who watched an MMA fight for the first time while on the podcast.

"We've talked to Kenny Florian, Angela Hill - some real big stars of the sport," Harrison says; recent UFC debutant Paddy 'The Baddy' Pimblett, who marked his entrance in the promotion with a first-round stoppage of Luigi Vendramini, has appeared on the show as well.

Additionally, Harrison has interviewed fighters from the UK-based Cage Warriors promotion and believes interim featherweight champion Paul Hughes "could be in the UFC soon."

Looking ahead to 2022 in the UFC, Harrison believes there are several interesting fights to be made but wonders if welterweight champion Kamaru Usman will be able to continue his reign, given the seismic rise of Khamzat Chimaev.

"That is a guy [Chimaev] we all have to pay very close attention to - the hype seems to be real.

"Chimaev vs Usman - if it happens - that is going to be huge!"

Harrison expects a scheduled bout between former team-mates Francis Ngannou and Ciryl Gane to be a good match-up. They will meet in January 2022 at UFC 270 to crown an undisputed heavyweight champion.

"The bantamweight division in general, is incredible," Harrison adds. "I'm a big fan of Cory Sandhagen, but Petr Yan is just something else. Looking at Petr Yan, we could be looking at the next dominant champion in the UFC."

Harrison is also excited by the prospect of a third fight between Volkanovski and former UFC featherweight champion Max Holloway. The pair faced each other at UFC 245 and 251, with Volkanovski winning by decision in both meetings. Both results were highly scrutinised and debated by fans of the sport and following victories over Yair Rodriguez and Calvin Kattar in 2021, Holloway may have put himself in contention to meet Volkanovski for a third time.

"I know Volkanovski is 2-0 up, but no one is not going to want to watch that fight. You will tune into Holloway vs Volkanovski III - that is going to be a crazy fight!"