In a workmanlike display from Page (18-1), the welterweight was made to go the distance for only the fourth time in his professional career by Houston (8-1), the former Cage Warriors champion making his Bellator debut.

The 175-pound catchweight match-up started brightly for Houston with some early success, taking Page down in round one, but the Scot couldn't unload any significant ground and pound from top position. Round two saw Page counter a takedown and land some big ground strikes of his own, including one that connected with the back of Houston's head. Referee Todd Anderson halting the action to allow Houston to recover.

Page continued to land the better punches in the final round but it was a very scrappy encounter and the French fans that were allowed to attend showed their frustrations with a chorus of boos aimed towards both fighters. The judges gave the fight to MVP, 29-28, 30-27, 30-27, handing Houston his first first defeat of his professional career.

During his post-fight interview, Page made his intentions clear by calling out the man to inflict his only defeat in MMA so far, current Bellator welterweight champion Douglas Lima. Timothy Johnson spoiled Cheick Kongo's homecoming by defeating the Frenchman via split decision (29-28, 28-29, 29-28) in the main event of Bellator Europe 10 in the Accor Arena. Johnson was looking to exacted revenge over Kongo after a TKO defeat to the 45-year old at Bellator 208 in 2018. Check out the highlights from Bellator Euro Series 10 in Paris.

In the first round Johnson took advantage from a mistimed leg kick from Kongo to take his opponent on the canvas and delivered a flurry of punches. In the second, Kongo took control of Johnson on the canvas and with both fighters visibly tired heading into the third, both clinched for most of the round against the fence.

It was Johnson's third win in a row and makes him to a contender for Ryan Bader's heavyweight title. Bader hasn't defended his crown since last December against Kongo, which ended after an accidental eye poke.

"I sure hope [a title shot is next]," Johnson said in his post-fight interview. "I think every athlete has got their little window when things start lining up for them. I think the past three or four performances have showed myself that I might be in it right now and it might not come back around again." 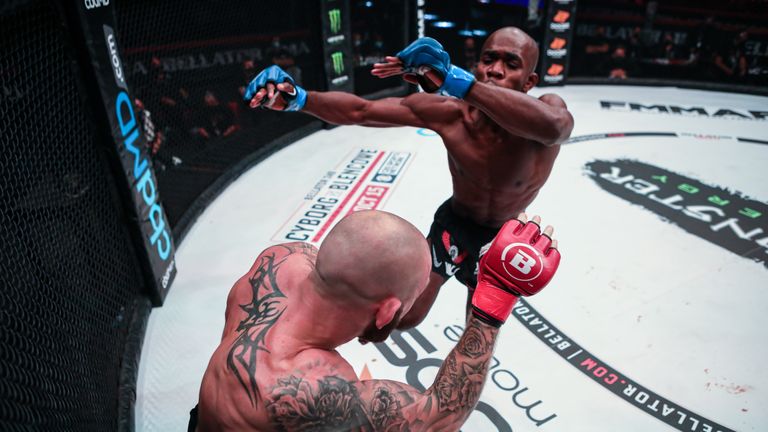 It was a debut to remember as Yves Landu knocked out Terry Brazier with this flying knee!

The performance of the night in Paris came from Yves Landu (16-8) on his Bellator debut. The Frenchman delivered a highlight reel flying-knee knockout to Terry Brazier in the first round. After the fight, Landu was clearly in the mood to celebrate showing off some impressive dance moves! 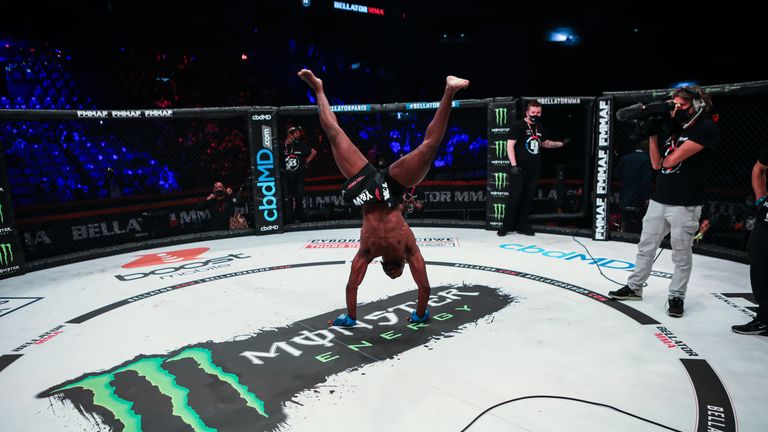 Yves Landu celebrated his win on his Bellator debut with some fancy dance moves in the cage.

Watch Chris Cyborg vs Arlene Blencova live on Sky Sports Mix at 2am on Friday October 16.