Leah McCourt is a Bellator MMA fighter, mother to Isabella and role model

Leah 'The Curse' McCourt (3-1-0) will make history this Saturday night when she becomes the first female to headline Bellator Europe. It will be just another day for the single mum from a council estate in Belfast.

The 27-year-old featherweight seems destined to join Conor McGregor as one of the MMA greats. She is on an upward spiral and heading towards more major honours.

County Down star McCourt, who won gold medal at the IMMAF World Championships in 2016, is a world and European International Brazilian Jiu Jitsu federation champion, as well as a black belt in judo. She has the ability and work ethic of a great champion, and now McCourt is ready to make history when she takes on Germany's Judith Ruiz at the 3Arena on February 22.

Last night I was given the news, that I will be main event at Bellator Dublin. Its hard to believe that a single mum from a council estate in Belfast will be main event in a sold out @3arena in Dublin live on @channel5_tv . I have clawed my way up from the bottom, life has thrown everything at me, but my determination has never waivered, this moment is a testament to my faith, work ethic, my team, my family and never giving up. To be the first Irish female to ever headline a major MMA promotions card and the first female to headline a @bellatoreurope card is surreal and emotional. I’m ready to rise to the occasion. Trust me, this will be a main event performance. Ready to make history. Thank-you to @bellatormma, @mikekogan and @judesamuels for this opportunity. I wish @strabanimal a speedy recovery and thanks for bringing Bellator to Europe. If it wasn’t for a superstar like James, a lot of us wouldn’t have this platform, still be fighting for pennies and jobless. Born for such a time as this. This is for you Isabella! #HISTORY . . . 🎫 Commision from all tickets bought from me are going to @friends_of_the_cancer_centre so contact me @ezacharopoulou or @air.una to order. Sponsors: any businesses that would like to join my team contact me. Sponsors & Team @coachowenroddy/ @sbgcharlestown / @teamtorreshq/ @ifitni / @lifelikemedia / @rayginleyboxing / @air.una/ @meatballmolly / @ezacharopoulou / @hazardharvey / @lindseydoylept /@slimshealthykitchen/ @mikemccomishfitness / @boojummex/ @a_mcgreevy/ @healing_heat/ @virusintl/ @thephysiogroupni/ @thecbdfarmacy

Make no bones about it, McCourt doesn't trudge over two hours, four days a week from Belfast to Dublin to train without an end goal.

Her typical day involves dropping her nine-year-old daughter, Isabella, at school before driving over to the SBG Charlestown gym where she hits the pads with Owen Roddy - McGregor's striking coach - from 10.30am until 1pm. She then heads back on the road to Belfast to pick up Isabella at 3pm. Then it's homework time before dinner.

But the day doesn't end there for McCourt, who resumes her training down the local boxing gym for strength and conditioning, and only then can she start thinking about sleep.

A lot of other boxers and fighters go away for eight-week camps and can just train and relax whereas my life is just non-stop.

"I've been doing this for about two-and-a-half years now," McCourt told Sky Sports' Raz Mirza. "Isabella loves Bellator and she is so proud of me. She is coming to this fight, but she has never been before. She usually watches my fights with my mum on TV after I have won.

"This will be my fifth professional fight and to be honest I'm just trying to get my tasks done every single day so it hasn't really sunk in yet and I don't really feel like it's real life. I get up in the morning and I just do not stop until I get back in at 10 o'clock at night so I don't really see all the hype.

"It's just sponsors, training, medicals, meetings, running from Belfast to Dublin, I don't have one second. A lot of other boxers and fighters go away for eight-week camps and can just train and relax whereas my life is just non-stop. To be honest, that's just the way I like it. After the fight I think it will sink in for what has happened and what I have achieved on my journey to get here, but at the minute there's a big task in hand and a lot of commitments.

"I'm exhausted 24-7, that's just like my norm. I don't know what's it's like not feeling exhausted. Getting in the cage is the easy bit. You can usually see me lying on a cushion fast asleep before a fight because I'm usually so relaxed. The actual fight is the easy bit." 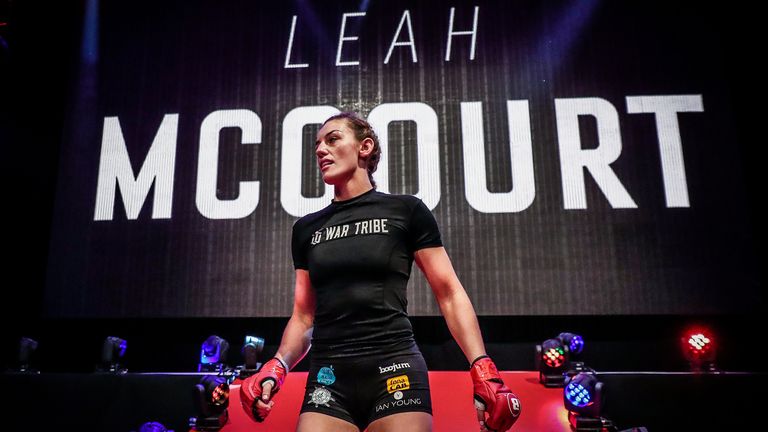 Meet me at the top pic.twitter.com/sqTu5w2YsT

McCourt, who grew up on a council estate in Belfast, spoke about how her family were affected in different ways to the sectarian violence going on at the time.

"There's always been trouble in Belfast, there's always been different threats," she revealed. "When my family moved out to the country things became pretty normal from there. I think Belfast is always going to have a reputation and stigma attached to it. Things have moved on but there's still a lot of conflict. I'm lucky that I didn't have to see it or my daughter had to see it."

Despite the hardship involved of being a single mother, McCourt feels like she has taken to parenthood like "a duck to water".

"Looking back that's been one of the easiest things, being her mum. I always say if god dropped a child from heaven it would be Isabella. She's just the most easy-going, well-behaved, loving child. She's so mature and she is like my life buddy," laughed McCourt.

Trainer Owen Roddy has previously called McCourt the best female fighter in the world, but McCourt, who is seeking a fourth-straight win when she takes on submission artist Ruiz, feels his experience has added so much to her fighting game.

She said: "My work ethic is working towards being the best fighter in the world. I feel that I'm just at the very start of my professional career and I just want to keep improving in the cage."

McCourt plans to work on her strengths rather than her opponents when she fights Ruiz in front of a passionate Dublin crowd. Asked about a prediction, well, she can't see anything other than a hometown victory on February 22.

"It's the most crazy sport ever, but skill-wise I am better everywhere. I can't see any other result than me winning with a finish," she added. 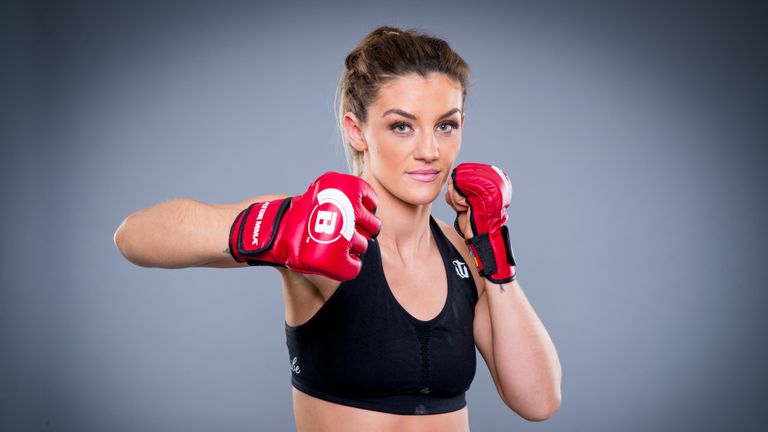 Leah McCourt makes her return to Dublin this weekend, where she'll face Judith Ruiz in the main event

What's coming up on Sky Sports...