"Don't tell me Conor McGregor doesn't matter, he does!" 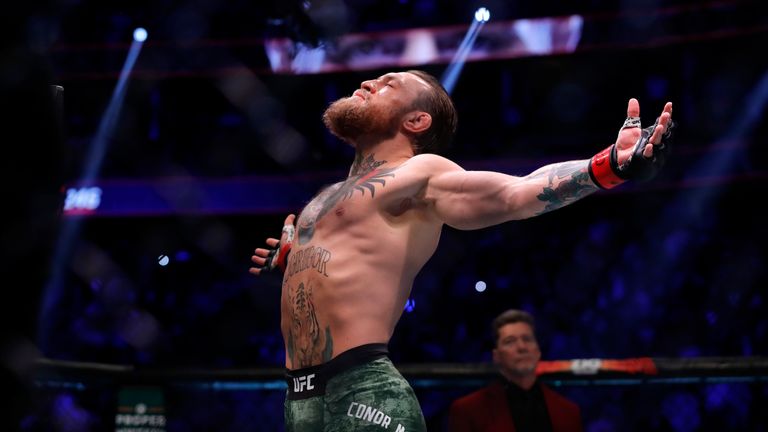 Chael Sonnen believes that Conor McGregor will return to fight at welterweight, where Sonnen argues that he's already the number one contender

"I think you could have an argument that Conor is the No 1 contender at 170," says Chael Sonnen, who believes that Conor McGregor will return to fight at welterweight.

McGregor (22-4) made his long-awaited return to the Octagon in January in the main event of UFC 246 in Las Vegas, where he demolished Donald Cerrone in a welterweight match-up in just 40 seconds to claim his first victory in over three years.

The 31-year-old appears eager to fight and has said he wants to return to the Octagon in the summer. He has already set his sights on a showdown with recently-crowned interim lightweight champion Justin Gaethje.

Former MMA fighter turned analyst, Sonnen, is not convinced McGregor will come back at 155lb should Gaethje take on Khabib Nurmagomedov.

"Conor is a lot of fun. If you were to rewind the tape a year ago, he was doing the same stuff. And I found it very annoying. The reports were he wasn't in the gym. He certainly wasn't licensed anywhere. So if he was going to come back, if you call a guy out and not willing to step into it, I don't particularly love that kind of stuff," said Sonnen.

"Conor McGregor means it right now. He will fight Oscar de la Hoya. He's not kidding! He will go out there, do his best to butcher up Justin Gaethje, he'll give Dustin Poirier a rematch. Conor is spreading the venom around.

"I'm just not convinced he's going back to 155lb. If we're to see Gaethje taking on Khabib, I tend to believe that just pushes the calendar out for Conor. I think Conor is looking for something else to do. I think that's where Jorge Masvidal possibly comes into play, the Nate Diaz trilogy comes into play, I'm just not convinced that Conor's next fight will be at 155lb."

Sonnen, who fought at middleweight, light heavyweight and heavyweight, thinks McGregor will go up in weight class, and he will be No 1 contender if he does.

He said: "I think he's going to fight at 170! I think you could have an argument that Conor is the No 1 contender at 170! If they [Kamaru] Usman and Jorge Masvidal [fight], and I hope they do, I hope that all gets worked out, we're just seeing the gamesmanship, I'm think that's really the right fight to do, I'm not sure you can't say Conor's not next in line!

"There's a number of good arguments. Leon Edwards comes to mind, you've always got T-Wood (Tyrone Woodley) in there, Colby Covington, Conor's name is just as good as anybody I just threw out! They guy's won three world championships. He diminishes himself. Conor comes out and tells everyone he's the champ-champ. He's a champ-champ-champ! He's won so many damn world championships, he forgot about the interim title!

"I was there the night he beat Chad Mendez. I was there when they put that around his waist. He's got three world championships!

"Don't tell me Conor McGregor doesn't matter, he does!" Chael Sonnen discusses the Bellator heavyweight Grand Prix tournament match between Roy Nelson and Matt Mitrione, which you can see this Saturday on Sky Sports Action from 10pm