Perry is inspired by the design of 10-year-old Emma Lou, the winner of a national design competition that took place over the summer of 2020; Perry becomes the first mascot at any multi-sport Games who will be brought to life through augmented reality 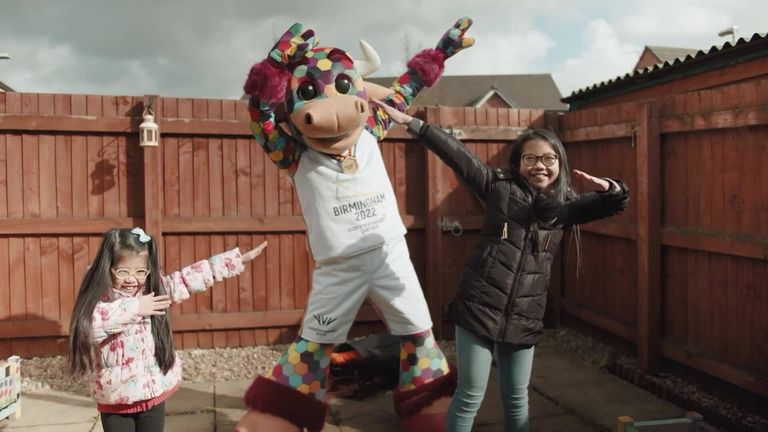 The official mascot for the Birmingham 2022 Commonwealth Games has been revealed as Perry, a bull adorned with a patchwork of multi-coloured hexagons.

Perry becomes the first mascot at any multi-sport Games who will be brought to life through augmented reality, giving people the opportunity to #PoseWithPerry using their mobile phone camera and via a special filter on Facebook and Instagram.

The Birmingham 2022 Commonwealth Games is the biggest sports event to be held in the UK for a decade and will be seen by a global audience of more than one billion people.

Perry is inspired by the design of 10-year-old Emma Lou, the winner of a national design competition that took place over the summer of 2020. The competition tasked children aged 5-15 with creating a mascot that reflects the identity, heritage and culture of Birmingham and the West Midlands.

An animated video telling the story of Perry's personality and characteristics has also been unveiled. The animation is narrated by comedian Guz Khan, creator and star of critically acclaimed BBC sitcom Man Like Mobeen, a comedic take on life in inner-city Birmingham.

President of Commonwealth Games England and Olympic champion, Denise Lewis OBE, said: "When I helped to launch the mascot competition last year, I knew the imagination of our children would produce an inspiring and unique mascot like Perry.

"I was blown away by the creativity of the children who took part in the Virtual Mascot Summit, and it's lovely to see so many of the ideas we discussed come to life in this mascot.

"Perry represents the heritage of Birmingham and the West Midlands, as well as what the modern region stands for.

"Perry is right up there with the fantastic mascots I've seen during my athletics career, and I can't wait to see him entertaining the crowds during the Games next year!"

Chief Executive of Birmingham 2022 Commonwealth Games, Ian Reid, said: "Perry is everything I hoped our mascot would be and more: bright, colourful, energetic and totally representative of modern Birmingham and the West Midlands. Perry celebrates diversity, community, and our region's heritage as well as its future.

"From today, Perry becomes a powerful icon for Birmingham 2022 all over the world, and you'll be seeing a lot more of him during the countdown to the Games.

"He is a symbol of the coming together of the Commonwealth in Birmingham, and I am sure young and old will love him as much as I do!"