During Black History Month, Sky Sports News' Emma Paton sits down with one of the great sprinters of all time, Shelly-Ann Fraser-Pryce; the 34-year-old Jamaican shows no signs of slowing down - Fraser-Pryce is a three-time Olympic and nine-time world champion, and is only getting faster 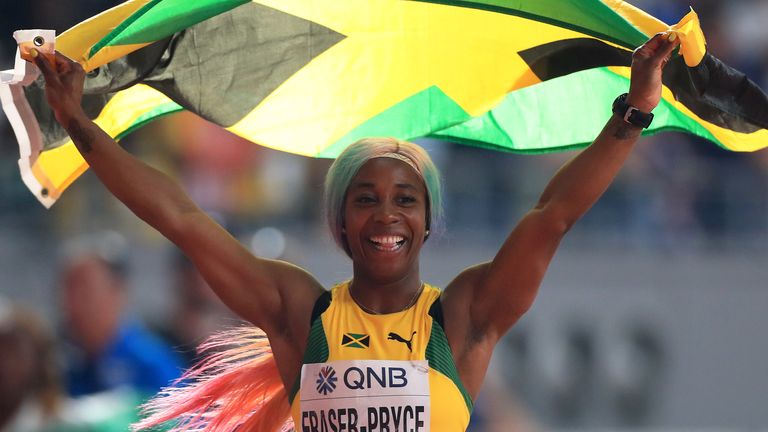 The 34-year-old added an Olympic silver to her extensive medal collection over the summer, but Fraser-Pryce is not ready to put her feet up just yet.

"Listen, I'm lining up with young athletes, athletes that have just started," Fraser-Pryce tells Sky Sports News. "And I'm still on top of the game so why stop there? Why not take it to the next level?"

Speaking to Sky Sports News a week before winter training gets under way, Fraser-Pryce talks Olympic heartbreak, 10.6 seconds of redemption, her future in the sport, and her legacy beyond it.

But we start at the beginning…

"When you're a young girl like me growing up in Waterhouse in Kingston, you're kind of conditioned to think nothing good comes from where you're from," Fraser-Pryce says.

"You have that mindset for a while until you start to have people that pour into you in a positive way, and you start to actually believe the things that they are saying about you, and it changes everything.

"In 2007, I went to the World Championships as a reserve, I wasn't even there to run and I remember being there and they called on me to run and I was like 'no, I'm not running'. I was crying because I didn't want to run!

"It was so much pressure and I didn't want to make any mistakes - but that's the fear of not feeling qualified for that call.

"I went and ran the heat, I was so nervous, I remember the crowd and everything. We made the finals and we got a silver medal, and I was so excited for that medal that I went home and I decided I wanted a medal for myself.

"I finally believed what all of those people had been saying. It's not necessarily about proving people wrong, but proving yourself right, that you belong."

Fraser-Pryce added Olympic 100m silver to that collection, finishing behind compatriot Elaine Thompson-Herah in the sprint final in Tokyo, but finished the season with a personal best of 10.60s, the third-fastest time in history.

"Looking back at the 2021 season it was mixed," she says. "I had a lot of highs and I had some lows, and you know I had the lows where I didn't want to have them.

"At the Olympics I was in great shape, I was definitely hoping to run so much better and I knew I could, but it just shows how the 100m is so fast and there's no room for error.

"When I ran 10.60s in Lausanne (at the Diamond League meeting) I was stoked because I knew it was there and I'm glad that I left the season still hopeful and expectant that there's so much more to come.

"There are lows but there are highs and I'm glad I got that high. Sometimes you can sit and get in a mood like 'is it ever going to happen?'. It happened and I'm grateful it did because I've been running for a while. But what keeps me going is the faith that I have that there's so much more to come and it's weird you can say that at this time in your career."

One year at a time

So what does the future hold for one of the world's fastest women?

"It's so mind-blowing that I think I owe it to myself, I owe it to the next generation of women that will come after me and those that are still here, to push this to another level.

"I said to my husband and my coach, it's so strange because I've heard of people when they are about to retire they say they're feeling so much pain. And while you understand their journey, I'm looking at it like, I still feel good! And if I feel good, why not go for it? "It's a year at a time. Before I counted it (Paris 2024) out, but then after the season and just the progress, you kind of know there's more and you want to take it a year at a time, because I'm looking forward to defending my (world) title at 2022 in Oregon.

"After that season, you look again and you're still feeling good then why not give it a shot. Paris 2024, I could definitely see it as a thing.

"What if I had believed what everyone else was saying, like, 'you had this year, you had a baby, now it's time to focus on motherhood and just call time on your career'. But why can't I focus on both?"

Fraser-Pryce's four-year-old son Zyon makes a cameo appearance at the start of our chat. Her achievements all the more remarkable, and iconic status certified, after her comeback from giving birth in 2017.

"My husband will show me videos of him watching the race and he'll be like 'there's mummy'. And he's cheering! For him, I'm always winning and that's as good as it can get," she says.

"It doesn't matter what the race says or what happens I'm always winning for him and that's how I want him to see me.

"He's very good at football, that's definitely part of the athleticism side of the family. In terms of sprinting or running, I don't know, he still looks a little slow! I have some time to work on it and get the ball rolling in terms of his technique. If he's going to sprint or do any form of running he has to first fix his technique so I'm going to work on that!"​​​​​​