As UK Athletics launches the sport's first LGBT+ network, coaches Shelley Holroyd and Andy Paul talk to Sky Sports about being out in track and field, and why the new group could be a game-changer

Shelley Holroyd has devoted her life to athletics, from competing at the Olympics to coaching Paralympians - but she says being part of a new LGBT+ inclusion project in the sport is a chance to make her career "even more worthwhile".

The former javelin thrower is one of the founding members of the Athletics Pride Network (APN), which has been established by UK Athletics to foster a greater sense of community for people in track and field who are lesbian, gay, bi and trans, with the support of allies welcomed too.

Holroyd, who is the UKA Paralympic Talent Development co-ordinator for throws, is proud to be out herself, and encouraged to see the governing body formally launching the network. "I've had a fantastic life in athletics," she tells Sky Sports. "I love my job - I don't even see it as a job, I see it as an extension of me being an athlete.

"As part of the APN, if I could help just one person, I'd be happy. But if I can help a whole network of people, I'll be absolutely buzzing from it."

Andy Paul, who coaches sprinters and hurdlers at Birchfield Harriers and works with athletes and other coaches on the Talent Pathway programme at the Birmingham Athletics Hub, is similarly enthusiastic. Last year, following conversations with one young runner, he asked UKA's equality, inclusion and diversity lead Donna Fraser to help set up a workshop to explore LGBT+ experiences and inclusion.

"I looked on the governing bodies' websites - I used to work for British Athletics - and there was nothing outward-facing on this," says Paul. "Staff training is great, but I thought we're not really shouting about our sport which for me at least is quite open.

"I thought it was an opportunity to tell a really good news story about that and share some experiences that are very positive about equality in our sport. It's not a perfect world by a long shot. But it's started now and hopefully, that will build." 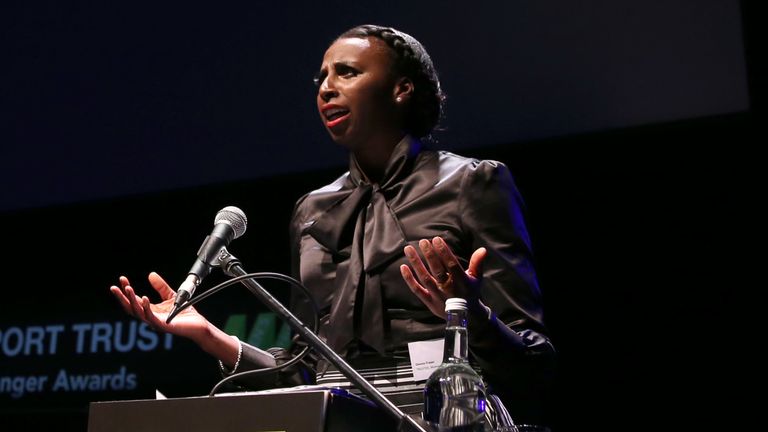 We as an organisation are committed to the creation and enhancement of an inclusive culture. I’m delighted that we have so many people from within the sport who are driving this forward and asking us to provide support to get this network up and running.

The seminar was held in Loughborough in December and attracted a diverse group of attendees - from elite athletes to long-serving officials, from administrators to media officers. There was a mix of anecdotes too and as Paul suggests, those that show the imperfections of sport are exactly why a visible network is needed.

"It's about time something does change," says Holroyd. "It seems some people still need to realise that when you put that vest on, you're an athlete. It doesn't matter whether you're gay, straight, black, white - you're representing your country, and that is it."

As for Holroyd's own journey, she joined her local club Sale Harriers as a teenager having known she was a lesbian since around the age of nine. She says she did not need to come out to her parents - "they just knew" - and brought her first girlfriend home when she was 15. But she found others in athletics were not as accepting.

She recalls taking an elevator while at a big competition. "There were three other athletes stood there - very high-profile athletes - that actually refused to get in the lift with me. And that was soul-destroying for me. I went back to my room, and cried.

"I was like, why? What's wrong with me? Have I done something wrong? But it was just because they had an issue with themselves - it wasn't my issue." 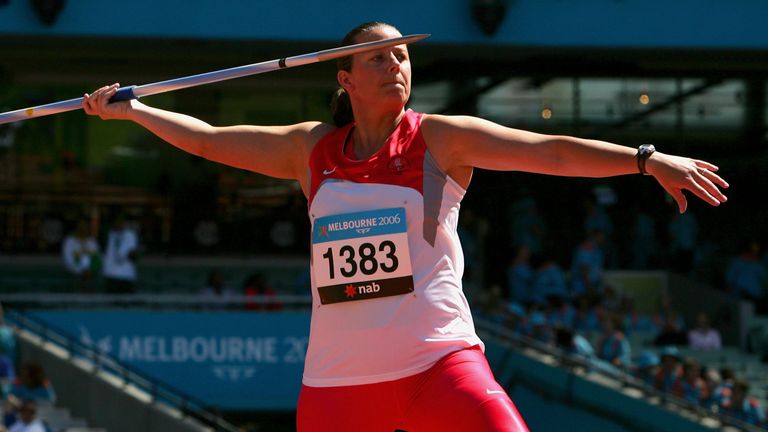 I see it as an extension of me being an athlete. If I can help more people be comfortable with themselves, bring it on.

That realisation only came later, however. "For me, as a young athlete, there was no helpline, and no one you could talk to within the sport. It did get to the stage where I thought, why am I doing this?"

Later, advice from her grandmother enabled Holroyd to regain her self-confidence. "She told me I should only care about what I was doing. And that's so true. I flipped it - but a lot of young athletes can't do that, because they're not strong enough."

She has major concerns about the effect of social media on people struggling with their sexual orientation or gender identity. "I think things are happening still, and people are not dealing with it. Social media's been a huge barrier. As much as I love it for keeping in touch with friends, I see other things come up on Instagram that are quite upsetting, in a way."

Challenging homophobia, biphobia and transphobia is one of the three main APN objectives, along with improving access to athletics for LGBT+ people and being a support network both for the community and their allies. The latter is key, says Holroyd - "we need to be there for parents too, because they become very protective". Ultimately, she hopes the network will be a forum built on respect in which people feel empowered to share stories about who they are.

Paul has one further goal for APN to achieve - to inspire other sports to grasp the inclusion baton and really run with it. He sees how the lack of gay and bi representation in men's professional football continues to be a curiosity, and wants to assist in shifting that conversation onto more practical ways to bring about change, such as addressing how being in the closet is a drain on mental health.

He shared his own story in a powerful short documentary film made in December 2017 by Kee Ramsorrun, titled 'Out Of The Closet and Onto The Track'.

"Of the people I speak to as athletes, I don't think any of them see it as a disadvantage to use their sport to talk about themselves," Paul explains. "It enhances their mental health in that respect.

"But I absolutely understand that in some sports, and men's football is a really good example, that there are athletes out there who are in the closet and who feel deeply concerned about being more open than they can be. So if we can demonstrate what sport can do for mental health - whether you're gay or straight, trans or lesbian - let's use that model and see what we can do to help others."

Paul was stuck in the closet himself, "for way too long", and not uncommonly found sport was somewhere he could focus without fear of judgement. "I spent time at school being bullied, like I'm sure many people have. But I don't know that I knew then exactly what I was being bullied for - and I don't know that the people who were bullying me fully understand it either. They just saw somebody vaguely different in their perception of what was normal, for want of a better phrase.

"But sport never judged what I was in the same way my schoolmates did. That allowed me to get on and do what I do. Once I got reasonably decent, you gained a modicum of respect from those people at school, because you used to win things on sports day. And some of that stigma about being queer was gone. So the journey went from one of being treated differently to helping me in some ways. I was being judged on other stuff."

Holroyd insists she was not in the closet by choice but was put there by other people. She remembers a young thrower confiding in her about having been bullied by her fellow athletes - they had surprised her in her room, and taken photos without consent. "She was just destroyed within two seconds, whereas they thought it was funny.

"We sat down, talked about it and she eventually said, 'I really appreciate your help. I'm also gay, and I'm really struggling. I think I'm being bullied because of it'. A couple of years later, I learned that she'd tried to kill herself.

"When someone's trying to be themselves and you put them back in the box, they become restricted in their personal lives. They feel shame."

It's a heartbreaking story and despite the increase in LGBT+ visibility, many people still find themselves caged because of family, friends, work, sport or some other external factor that locks them down internally. Stereotypes and stigma linger - but stories and visible symbols of inclusion can help to break their stranglehold, insists Paul. "My brother is a chief marksman and wears Rainbow Laces all the time as an ally - those people can tell a very positive message about what we do as a sport too."

The APN does begin life with two Stonewall Sport Champions on its roster. Olympic race walker, Commonwealth silver medallist and multiple record holder Tom Bosworth came out publicly in October 2015 and after finishing sixth in the 20km at the Rio Games in 2016, he proposed to partner Harry on Copacabana Beach. 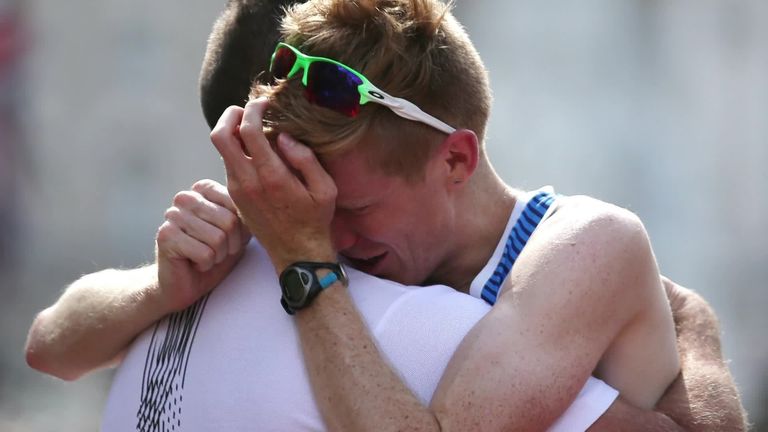 Like Tom, sprinter Corinne Humphreys competed for Team England at the Commonwealths in Gold Coast two years ago and is currently in rehab following surgery to repair an Achilles injury - the postponement of the Tokyo Games giving her additional time to heal and get back to her best.

Both have spoken in the media about challenges they have faced on their respective journeys - Humphreys conquered a feeling of inadequacy due to her appearance being perceived as more masculine, while Bosworth has battled with depression. Such honesty helps others know they are not alone, says Paul.

"If we just share more, we'll reach that kid who feels uncomfortable, or the elite athlete who's worried about screwing up potential sponsorship." He cites examples of brands like Nike and Under Armour using the rainbow flag in their advertising but is unsure why, despite such a show of support, many in sport still think coming out would make lucrative deals less likely. It's a complex picture, says Holroyd, full of Catch-22s and second-guessing. "I had many sponsors, and one of the things that was always said to me was 'just keep your personal life to yourself', suggesting if you didn't you'd be ostracised and you'd lose sponsors. Then people wonder why Colin Jackson didn't come out until he'd finished athletics. People don't put two and two together."

It's getting better, she says, but some remain oblivious to inclusion and the unseen effects of ignoring it. "It's heartbreaking for me to be in this sport and see this go on. It's 2020 and it's still happening, and it shouldn't do." The Athletics Pride Network is a conscious, collective effort to speak through the silence.

Sky offers support for our viewers on a broad range of topics, including feelings of distress and despair. Find out more here.