Never mind Kawhi. The WBBL boasts its very own K Leonard, whose long-destined British exploits are amounting to frequent passing clinics and MVP contention in her first season with the BA London Lions.

Kennedy Leonard was immersed in basketball as early as the age of three. She grew up in Chicago amid the latter stages of Michael Jordan's storied career with the Bulls, engulfed by the greatness that inspired so many kids to strap on a pair of 11s and step out onto a local court. She would often accompany her dad to the gym where he would try and emulate the six-time NBA champion, as all in the Windy City would.

Leonard attended every Bulls camp she possibly could, even featuring on one of the team's brochures before a game after winning a skills challenge.

"We still have that in our house in Colorado," Leonard tells Sky Sports.

The obsession was born. If you were looking for Kennedy, the gym wasn't a bad place to start.

"I spent every day basically on a court (as a kid), on my driveway as well. It's my favourite place to be, you can be free, you can do whatever you want to do, you can forget what's going on around you," she added. Back in high school I had a good coach who always let me in the gym and stuff like that so it was one of my top places I could be found."

A hobby that originated in Chi-Town has since evolved into a profession in England's capital, where Leonard has been dissecting defensive schemes in a tremendous debut season with the Lions.

The 24-year-old was crowned WBBL Trophy final MVP in last month's 96-64 win over the Nottingham Wildcats after logging 21 points, nine assists, seven steals and six rebounds, and is currently averaging 15.1 points, 5.3 rebounds and 10.6 assists through 14 games in the WBBL Championship.

She recently surpassed 150 assists in the Championship amid her pursuit of Georgia Jones' single-season record of 178, having also broken the division record for most in a single game with 21 against Caledonia Pride. From deep-court touchdown passes to mid-court daggers and no-look reverses, the Lions technician has been dishing them out for fun.

Caledonia felt her wrath again on Wednesday night as she posted a season-best 29 points alongside eight rebounds and seven assists.

Leonard is flourishing on a stage that, courtesy of her mother's background, perhaps always had her name etched on it somewhere.

"My mum was born in Scotland in Dundee but she actually grew up in South Africa and then when she was 16 she moved from South Africa to America to train for the Olympics so she has a lot of history with the UK," explained Leonard.

"One of her sisters still lives in Scotland and then her other sister, my auntie, lives in York here in England and my grandma also lived in York. I have tonnes of family here, I've been here, my mum is from here, so I'm a dual-citizen with here and America. I definitely have roots here and it feels like home now more than ever."

Leonard has sought to honour her mother's British blood by representing GB's under-20s in summer 2016, before being named to the initial 17-women squad for the 2019 FIBA Women's EuroBasket and making her senior debut in a friendly against Sweden.

"It's cool to wear a flag on your chest," she said. "I think it's a thing that's hard to describe unless you do it, unless you're in the moment. I'm thankful for my mum. She was the one who said 'you should try and play for Great Britain' and I think it's cool for her as well to see that I'm playing kind of for her country.

"Especially because she doesn't live here now, she's in America and she's also a dual-citizen, so it's cool for her to see her roots have played a part in me becoming the player I am and the things I'm achieving."

FIBA's murky specifications over eligibility for a player of Leonard's background means her national career is yet to really take off, not helped by Great Britain's failure to qualify for this summer's Women's EuroBasket, which also means they are unable to qualify for next year's Women's World Cup.

Nevertheless, Leonard remains keen to represent GB and even holds Olympic ambitions she aims to fulfil further down the line.

Leonard played varsity basketball for four years as a star of Southlake Carroll's high school outfit, before heading to the University of Colorado where she graduated as the D1 programme's all-time leader in assists (644) alongside her 1,635 total points in 114 games (112 starts).

Such was the extent of her impact, she departed as the only player in school history to amass over 1500 points, over 600 assists, over 400 rebounds and over 200 steals.

"I think in college when I was in talks for awards for like 'best point guard in the country' and stuff like that people would be telling me 'you're actually really good', I think that's when I was like 'okay, I can actually make a future out of this'," she said.

"I think going to Colorado changed my life. I was able to play since I was a freshman and I played in a really good conference with really good players and against really good teams so even if we didn't win every single game I was playing against some of the best competition in the country and world at that stage in my life."

Colorado runs deep in the family, but with a minor deviation.

Leonard's college success triggered a running battle for bragging rights, with both of her parents having attended fierce rivals Colorado State back in the day.

Speechless.. this is for all the people who said I’m not good enough, too small, too slow, how I’ll never make it.. this is for all of those people and all of the other little girls who are hearing that same stuff. Thank you to my teammates, my coaches and also my family. Blessed pic.twitter.com/fSHQX47hyg

"No matter how hard it was, I think being able to represent that school at a place where my family has roots as well was a pretty cool experience."

The student-athlete rollercoaster is one she has archived in the back of her mind as an experience like no other.

Leonard recalls everything from being awe-struck by the 50,000 seater football stadium reflective of college sport's immensity, to the food card that enabled her and teammates to eat off campus. She remembers being introduced to a culture of playing for something 'bigger than you' by Colorado fans that would be left more angered by a defeat than the players, and neglecting her social life as a consequence of a packed routine.

A typical day would look like breakfast at 8am, class from 8:30 up until lunch at midday, practice at some point between 1pm and 6pm, followed by time with tutors that would often result in getting home at 9pm. From there it was dinner, bed and repeat.

"I knew sports were important, but you don't understand the enormity of it until you're playing in a game or watching a game with 70,000 fans and you're wearing that NCAA badge," she explained.

What about the nightlife, the sororities, fraternities and all you might typically read about US college culture?

While labelling Colorado a 'huge party school', Leonard jokes she would barely have the energy to stay up past 10pm during the season, at which time there are naturally strict rules on drinking at certain hours before games.

Time away from the court was also mainly spent with teammates, something Leonard wishes she had expanded on.

"I look back now and think I should have made more bonds with people who didn't play sport because they can bring you so many other places in life," she adds. "Of course my teammates have jobs and connections but you miss out on that whole other side of college life because you focus so much on sport."

Leonard's thriving college career was cruelly disrupted by a foot injury in her senior year, sideling her for over a month on the back of 100 successive starts. She looks back on one of her most testing trials to date as a telling insight into those that were really there for her.

After missing out in the WNBA Draft as a result, she signed with German top-flight side Herner TC, averaging 11.7 points, 3.5 rebounds and 3.3 assists per game and competing in the EuroCup Women before seeing her maiden professional campaign halted prematurely due to the coronavirus pandemic.

Lions head coach Mark Clark subsequently made contact with Leonard, succeeding in luring the guard to the UK in view of a prosperous new era for the franchise.

In a short space of time, Leonard has been exposed to the varying and increasing opportunities to compete outside of the United States.

"The WNBA was something I was supposed to get Drafted to and then I got hurt and I don't blame people, they're not going to Draft you if you're hurt so that's why I went to Europe," she said.

"I always knew Europe was a big place for basketball, both men and women, because I had teammates in college who were from Europe and had played pro before. 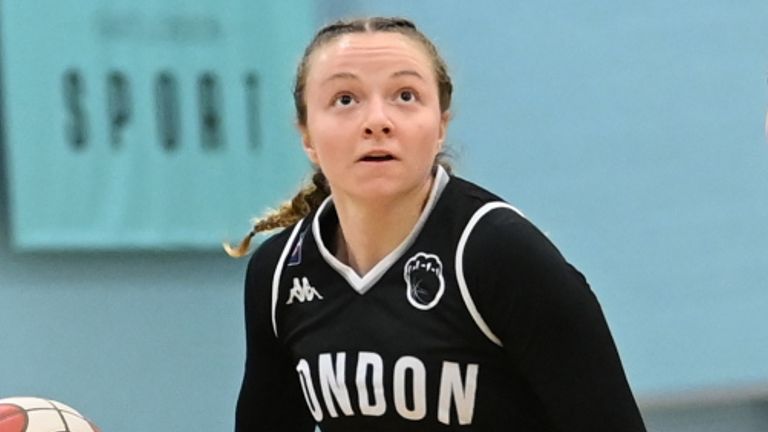 "The WNBA and NBA are hyped up of course, but there are so many other options in other places that people don't realise until you're here and experiencing it."

Leonard on life outside of the States

Leonard is yet to decide on her future beyond this season, but admits she is keen to sign on again and working with an 'if it's not broke, don't fix it' mentality as she looks to get the most out of a so far enjoyable stint in London.

At the same time, she naturally misses certain home comforts. Namely her family, Chick-fil-A and her two puppies Gus and Emma, whom she is grateful to her parents for looking after in her absence.

"I miss them a ton," she said. "But the good thing is I've been here before and this is like technically another home for me so I don't miss it as much as I thought I would. I think that speaks a lot to the people here and how homely they've made it for me here."