"I felt there was no weight behind it, it felt like a pass. It felt like we were giving the league a pass, the teams a pass, ourselves a pass by just saying, 'OK, we're kneeling, that's enough'." The BBL's Pharroh Gordon tells Sky Sports why he no longer takes a knee

Earlier this year, Cheshire Phoenix guard Pharroh Gordon became the first player in the BBL to stop taking a knee before games in support of the fight against racial injustice, his decision to do so stemming from the belief it has become a 'token gesture'.

Gordon and the BBL joined professional sports leagues and athletes around the world last year in demonstrating solidarity by taking a knee in protest against systemic racism following the police killing of George Floyd in Minneapolis.

But by mid-November, the 24-year-old found himself questioning the true impact of the gesture, eventually informing his team-mates he would no longer be kneeling with them.

"When we were taking the knee for the second game of the season I was in my head thinking 'what are we really achieving doing this right now?'", Gordon told Sky Sports. "I came to the conclusion that if we'd raised awareness and the issue is being talked about, if we aren't going to actually do something, this had just become a token gesture.

"And to me, I felt there was no weight behind it, it felt like a pass. It felt like we were giving the league a pass, the teams a pass, ourselves a pass by just saying, 'OK, we're kneeling, that's enough'.

"It upset me and hurt me that that felt like that was all that was going to happen. I let the team know that I wasn't going to take the knee anymore and they all supported me. But I didn't go public because I didn't want to ruffle feathers."

Gordon recalls asking Phoenix general manager James Brice at the time how the league would address the issue, to which he was informed of work taking place behind the scenes between Sport England, the BBL and Basketball England on plans that would later be laid out to each team.

A month on and he was still waiting.

"Bearing in mind we've been back playing for like six weeks at this point, the protests had happened months ago and fair enough COVID had disrupted things and made things difficult for a lot of people trying to organise the league, but I felt personally enough time had passed as to where the schedule is set out, we know the protocols and what we have to do to keep people healthy and keep the league running, now what can we do about this other very big issue that arguably is just behind COVID or on a level with COVID at this point?" he said.

Sky Sports contacted the BBL for further information on their proposals to address the issues further and offer more support for players.

In an official statement, the league said: "This season, we've taken the opportunity to really evaluate our path, including how we support our players. Putting the foundations and frameworks in place to ensure a transparent and committed process does take time and we are currently working on the development of a new initiative called BBL Supports covering a wide range of issues.

"An integral part of this is Players Voice, a forum for players to ensure direct communication with the BBL and for those players to help shape the programme's development. There will also be a training programme designed initially to support basketball activities and expanded over time to include more areas following consultation with players. There's also the opportunity for players to become BBL Ambassadors and trained to mentor future generations through our community activities."

Orlando Magic forward Jonathan Isaac made headlines last summer as the first NBA player not to take a knee or wear a Black Lives Matter T-shirt prior to a game, explaining that he didn't believe it was the 'answer'.

Not long after Gordon's decision to stop Crystal Palace forward Wilfried Zaha also spoke out against taking a knee, labelling it as 'degrading' and urging others to 'stand tall'. Brentford striker Ivan Toney followed up by suggesting players were being "used as puppets" when taking a knee after the Championship club stopped participating in the gesture in a push for more action from authorities.

"I think he (Zaha) feels that as a people we've had to kneel more than enough times, we've had to take the oppression, take the injustice for hundreds of years and if the kneeling itself isn't serving anybody or anything anymore, I think he felt it had become a waste of time," added Gordon.

As with Isaac, as with Zaha, as with Toney, Gordon now feels we must step up the fight against racial injustice.

"The degrading part of it I think plays into having to kneel and now we're having to kneel again, when again nothing is really changing. Personally, I knelt at first willingly and wanting to and didn't feel like it was degrading, but I did feel kneeling with no work alongside it was just a waste of time. That's why I decided to stop."

Similarly, Gordon questions the impact of posting black squares on social media as many did to support Blackout Tuesday on Instagram, or hash-tagging #BLM in communities of people who already support the movement.

His hope is that families are being asked questions about the issue by their children, and subsequently providing the correct answers.

Gordon admits he did reconsider taking a knee in February when three Glasgow Rocks players were the victims of racial harassment that resulted in them being moved from their accommodation to another property. 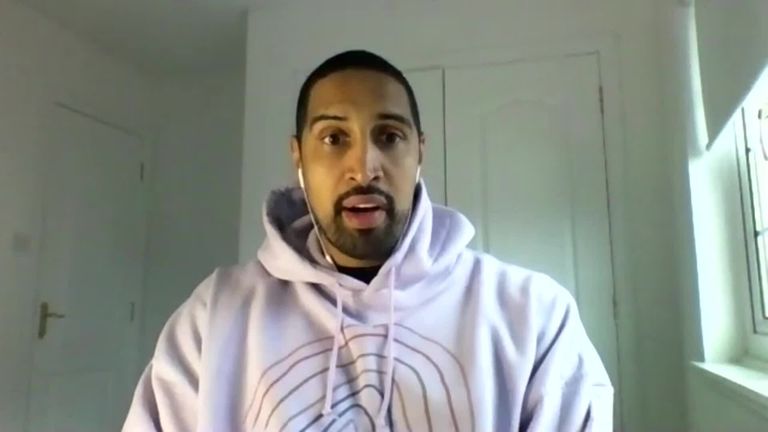 A team statement detailed how David Mpondo, Julius van Sauers and Marc Kwedi had been threatened, referred to as 'monkeys', had their car vandalised and that calls had been made to the police claiming they had prostitutes in their house.

Responding to the incident on Twitter, the BBL wrote: "We were appalled to learn of the abhorrent racist abuse levelled at these players. As a league, we fully support and stand with all in our community in the fight against racism."

"At that time because it was very quickly after I said I wouldn't (take a knee) but it just reminded me we needed to do more," said Gordon. "What that is is to be confirmed. They shouldn't have to go through that. It all comes down to we need to start doing something more."

August will mark five years since former NFL quarterback Colin Kaepernick opted to sit for the US national anthem prior to the San Francisco 49ers' first preseason game, something that over the following weeks would evolve into him taking a knee.

Kaepernick was booed by some as his protest against police brutality and racial oppression was misconstrued by many as a sign of disrespect to the military and the American flag.

Then-president Donald Trump became a prominent supporter of that sentiment, urging team owners at the time to fire players that protested. The NFL itself also failed to support Kaepernick's message at the time, introducing a policy requiring all players to stand during the anthem or stay in the locker room.

Gordon remembers the period well having been Stateside on scholarship at William Jewell College.

"I was in New York at the time. Kaepernick took the knee and two days later I was in the physio room and a coach asked what we thought of it, I told him what I thought and his response was kind of just like 'if he doesn't like it why doesn't he just leave? Why doesn't he go to Africa or wherever where he thinks it's better?'," Gordon recalled.

"It's all well and good talking about people fighting for their freedoms and then fast forward to today the majority of people aren't 'free'."

While able to recognise growth in support and understanding for Kaepernick's true intentions, Gordon remains frustrated by similar misconceptions continuing to hinder the push for progress closer to home.

He cites seeing the real focus of peaceful Black Lives Matter protests in the UK last summer being overshadowed by claims of COVID rules being broken, property being damaged and the movement being politicised.

"Immediately the attention gets taken away from the actual issue and put on why the issue that's being raised is somehow controversial," he explains. "It's like 'Why are we wasting time and energy about whether this is the right way to do things when the real thing we need to be talking about is over here not getting spoken about?'

"It's like we're not really engaging with the actual issue and if we all try and focus more on that maybe we'd actually get something done."

Then comes the tough question. Taking a knee has undoubtedly raised awareness regarding racial oppression and inequality, but what comes next?

"It's hard for me to say," admits Gordon. "Maybe it's pushing stuff to schools but again maybe that's just more of what we've already been doing.

"What I would like to see is for representatives from the league or members of each team to come together and collaborate and talk about this stuff, maybe somebody out there does have a great idea but just doesn't have a platform to speak on it and maybe they've said something to their GM but it hasn't gotten brought up in a BBL meeting or board meeting.

"The more heads on this there are the better. It isn't something that is going to get fixed overnight or get a brilliant idea that's going to fix everything. It's going to take a lot of work.

"Starting that as a collaborative effort with ultimate transparency and communication, that's at least where we can start. And hopefully sooner rather than later we decide on an appropriate course of action."