The Newcastle Eagles go in pursuit of their seventh playoff title while the three-time runner-up London Lions seek their first. Watch the BBL and WBBL play-off finals live on Sky Sports this Sunday.

The marvellous aesthetics of Leicester's NBA bubble-esque Morningside Arena make for a fitting finale backdrop as the London Lions and Newcastle Eagles prepare to close the curtain on May Madness in Sunday's BBL play-off final.

Familiar territory awaits Newcastle as the most decorated club in league history with seven BBL Championship titles and six playoff victories, while 2018-19 champions London seek their maiden postseason crown as three-time runners-up in what will serve as a rematch of this season's BBL Cup final showdown, edged 84-77 by the Eagles.

The BBL Trophy-winning Lions enter the final having demonstrated their resilience by overturning a 12-point first-leg deficit to beat the third-seeded Plymouth Raiders 100-80 in Thursday's second matchup and 180-172 on aggregate.

"That second game, the comeback that they had, if we talk about teams that are battle tested that's just one of those situations where if you win a game like that over a tough and physical team like Plymouth, that's going to give you confidence going into the next game no matter what," said Sheffield Sharks captain and Sky Sports analyst Mike Tuck.

"The attitude and the poise and the energy and the focus they came out with in that second game, that's the London Lions that we need to see every night, that's the championship-run London Lions."

Newcastle clinched their 12th appearance in the play-off final by ousting the Sharks by two points in the first round before toppling the league champion Leicester Riders 164-146 on aggregate across the two legs behind a combined 61 points, nine rebounds and 16 assists from talisman Rahmon Fletcher.

In doing so they quashed any uncertainty over their postseason credentials, Fletcher suggesting after Thursday's semi-final second leg that they had proved a lot of doubters wrong.

"I think Rahmon relishes that underdog role because it gives him a reason to fight, it's a motivator," added Tuck. "But if you look at his track record this guy is incredible, two MVPs, they're always in silverware contention, they're always in the play-off race and close in the hunt so in no way is this an underdog.

"Okay they've had a few hiccups this season and finished fourth so they're the lower seed so they're going to use that to their advantage, but this guy is a proven warrior."

Two-time NBA G-League Defensive Player of the Year DeAndre Liggins has been a starring component of the Lions' success in 2020-21, with the BBL Trophy final MVP translating his phenomenal league form down the stretch onto the postseason stage.

Liggins posted a 16-point, 10-rebound, 12-assists triple-double in the first leg defeat to Plymouth before logging 23 points, two rebounds and four assists to inspire a London comeback; he currently averages team-high figures in all three departments so far in the playoffs.

"To me the heart and soul of it was DeAndre Liggins and I did the post-game interview with him and he was in tears, he was so emotional," explained Tuck. "I think that first game, although he had a triple-double in the first leg, it was kind of a quiet triple-double and he was held scoreless I believe in the first half so he was disappointed in himself.

"He stepped up when it mattered in that second game, hitting some big shots, hitting that pull-up three was the big moment for me from him. And the emotion he had in that post-game interview, you saw that he takes these things seriously, he takes them personally and I think that that type of comeback and to prove himself like that will spur him on into the final."

His glistening reputation on the defensive side of the ball could prove defining on Sunday when he is tasked with foiling the BBL's most prolific scorer in Fletcher, who averaged a league-high 19.2 points and 9.3 assists per game during the Championship campaign.

⭐️ @RFletcher_44 is on another level. Your Eagles #MayMadness Play-Offs Semi-Finals MVP...

Having returned just 18 and eight-point performances in the quarter-final series against the Sharks, the Green Bay product poured in 34 in the first leg against Leicester followed by a 27-point, 10-assist double-double in the decider.

"I think that's the match-up that we're going to be seeing," continued Tuck. "I think the damage that Fletcher has inflicted through the quarter-finals and the semi-finals, they need to put a defensive stopper on him and obviously Liggins, coming from an NBA background where he was known as a defender, they're obviously going to try and stick him on the best player.

"We saw it in the last series with Rickey McGill, DeAndre Liggins in the second game was matching up on McGill. For Liggins it's all about staying posed and staying out of foul trouble.

"We saw McGill Liggins pick up two quick ones early in the first quarter so if he can stay steady and not be too aggressive and go after every single ball and keep Fletcher as quiet as possible then I think they'll have a good chance.

"Fletcher has to be aggressive from the beginning and look for his shots, but he also has to do what he does best and find his team-mates, the guy averages 9-10 assists, he leads the league in assists so for him it's about getting all his guys involved and he's really good at doing that." 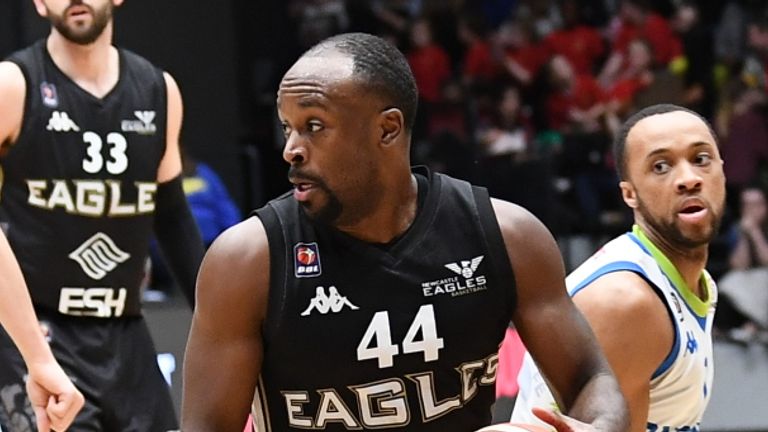 "Fletcher has to be aggressive from the beginning and look for his shots, but he also has to do what he does best and find his teammates, the guy averages 9-10 assists, he leads the league in assists so for him it's about getting all his guys involved and he's really good at doing that."

Mike Tuck on the importance of Rahmon Fletcher for Newcastl

Alongside the Liggins-Fletcher duel, there will be an added onus on those around them to supply key contributions.

The Lions' victory over the Raiders came at an untimely cost in that regard as two-time BBL MVP Justin Robinson exited the game with an ankle injury after putting up 20 points, seven assists and three rebounds in 24 minutes, head coach Vince Macaulay admitting afterwards that it was unlikely he would be fit to play Sunday.

"That game, they would not have won that game if it wasn't for Justin Robinson," said Tuck. "He came out absolutely on fire in that first quarter with 17 points going three for three from the three-point line and that's the Justin Robinson we all know and respect and he's the old guard in more ways than one."

Nevertheless, the depth London acquired over the summer in preparation for the Champions League means they remain well-equipped through the scoring power of Dirk Williams, who averaged a team-best 18.3 points in the league and led the Lions in scoring in the quarter-finals, along with the added presence of Orlando Parker, Shane Walker and Kevin Ware.

"If you look at the game Thursday, Vince (Macaulay) was throwing out all types of line-ups, some of the line-ups I had never even seen, some of those guys probably haven't even played together but they have the luxury of doing that because of the depth of their bench, so the Lions are a team that are going to try and wear you down."

Newcastle's threat meanwhile goes beyond Fletcher, with Justin Gordon averaging 16.9 points and six assists per game in the Championship while Cortez Edwards managed 14.7 points, 7.3 rebounds and 5.4 assists per outing.

"It's going to be an all-around effort because it's all hands on deck when you play the London Lions, just because of their depth."

Where will it be won or lost?

No team made more field goals than Newcastle's 1,010 in the BBL Championship this season as Ian MacLeod's side sought to assert their explosive brand of basketball early on in games.

As far as the Lions' chances of coming out on top are concerned, Tuck believes Macaulay's men must find a way to control the pace of the contest.

"Watching them back when they were playing Plymouth, if it gets too up and down, too wild, they struggle and it just gets too chaotic," he said. "They can play a fast pace but it has to be kind of controlled chaos because if they get too up and down there are too many quick shots, too many turnovers and the ball gets out of control.

"They're going up against a Newcastle team that plays up-tempo basketball and is really good at it, we've seen throughout the season they can put some numbers up on the board, they play really fast pace with Cortez Edwards and Fletcher, you've got too quick guards that you can outlet the ball too and they'll shoot the ball up the wing and most of the times they're making the right decision. 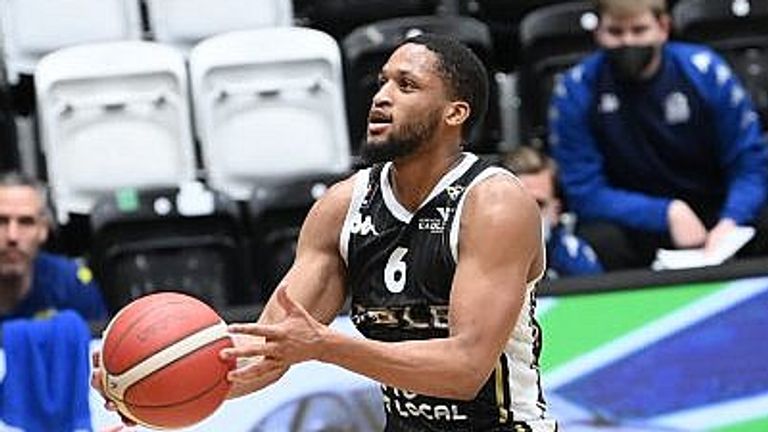 "Slowing Newcastle down, making them play at their pace and then wearing them down. Then on the interior, the biggest thing the Lions have is depth and then they've got a good rotation with their bigs so I think if you can get some of the bigs on Newcastle in foul trouble, specifically a guy like Maxwell or Darius Defoe, then it will be a different ball game if they're on the bench."

Tuck on the key to London overcoming Newcastle

While the Eagles' game-plan may not live and die with Fletcher, the talented guard looms as a potentially-decisive disruptor to the Lions' approach.

Fletcher has faced London four times this season; he dropped 21 points in the Eagles 88-79 win on the opening day of the season, was limited to just nine points in January's 109-89 defeat, delivered a game-high 21 in the BBL Cup final and registered another-game high 26 in March's 109-95 victory.

"I think you can't give London an inch because they'll take a mile. I think for them it's about starting the game extremely strong. It's not just going to be Fletch but I think he needs to be aggressive from the beginning." 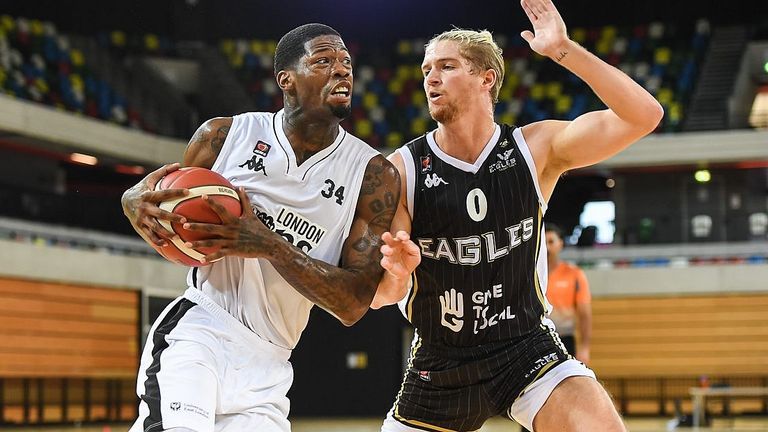 "All the science points towards London, but Newcastle have proved us wrong every single match so I wouldn't sleep on Newcastle. If you're going by the book it's London but don't count Newcastle out."

The BBL and WBBL play-off finals take place at Leicester's Morningside Arena on Sunday May 16, again live on Sky Sports.