"I definitely didn't progress other areas of my life because anything that got in my way, it was 'no, I'm focused on this Commonwealths or this Olympics, this World Cup'"

In an interview for National Inclusion Week, Ebony Rainford-Brent and Alex Danson-Bennett discuss the challenge of combining elite-level discipline and maintaining a healthy life balance.

As part of the week's theme of bringing people and organisations together to connect with each other, World Cup and Ashes winning cricketer Rainford-Brent spoke to Olympic gold medallist and hockey star Danson-Bennett.

In 2018, Danson-Bennett was on holiday with her now husband when she hit her head, with the injury ultimately resulting in her retirement from hockey in February 2020. Yet despite the head injury leading to her being hospitalised, after years spent dedicating her life to her sport, Danson-Bennett says it was "the best worst thing that ever happened" to her.

"I was definitely that athlete that was so diligent, I loved the training side of things, I didn't only love the competition which is almost the obvious, I loved the data, I loved all of the testing that we'd do," she told Rainford-Brent.

"It was very simple during my career, it was: 'will this make me a better athlete or not?'. And if it didn't then most of the time I wouldn't do it and if it would then I was like 'come on, let's do that then!'. I was driven by the detail and it's funny now, I retired back in February and I'd had a very serious head injury that kept me out of the game for a long time. 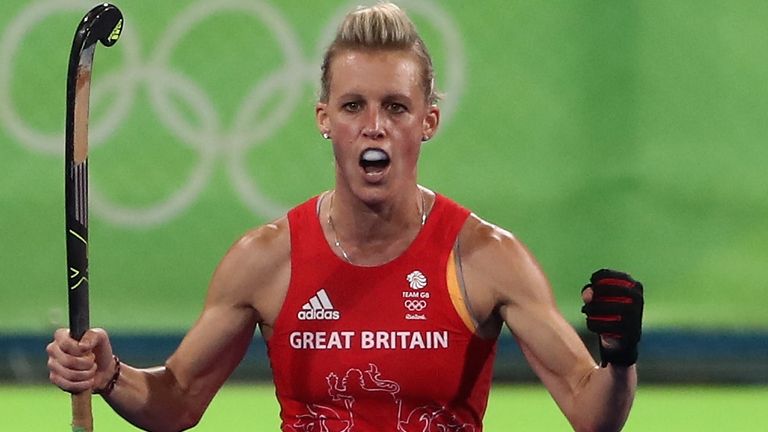 Don’t get me wrong, we wanted to be the first (Great Britain & NI) women’s hockey team ever to win an Olympic gold medal but it was bigger than that. It was about going down in history in doing so, about creating history for younger people who would come into the sport.

"People kept saying to me, 'oh I'm so sorry about you having to retire' and I was like 'no, I genuinely have no regrets about my career'. Although I'd say - and if you asked my husband as well - my life balance now is so much better, but I can look back over my career and know I gave it everything, I know I lived it to the best I possibly could.

"I definitely didn't progress other areas of my life because anything that got in my way, it was 'no, I'm focused on this Commonwealths or this Olympics, this World Cup', and actually my biggest changer came in 2018 when we had a home World Cup which was incredible!

"I led the team out, we didn't do as well as we'd hoped and my husband had booked a trip of a lifetime to Kenya - I didn't even use to take a holiday! Unfortunately, I had an accident and I hit the back of my head and the way that injury unfolded, I came back and I got progressively worse and worse to the point where I was hospitalised.

• • 2 years ago today I hit my head, and life as I knew it changed over night • I couldn’t walk more than 5 yards, I couldn’t hold a conversation, or tolerate any light or sound, car journeys were a no go, all screens were impossible, and headaches were 24/7 and often intolerable. At 6 weeks I got so poorly I was rushed into hospital. It felt as though I had no control over my body any more • Life was much like this for well over a year, I saw slow improvements but I was light years away from the international athlete I had been for 20 years • • As my health slowly progressed my mindset changed at a rapid speed. I learnt to find joy in sitting outside and observing, I spent time with family who visited almost every day. I learnt that health really is the most important gift and having someone to share life with was equally important to me. I realised that how we eat, how we think and how we sleep are imperative towards our health as I navigated a fine line between tollerable and bad days • 2 years on life couldn’t be any more different, and couldn’t be any more wonderful. I married the kindest, most patient and caring human in Alex, I helped my sister when she needed me most, I spend more time in nature and even more time with my family. I have better and more meaningful relationships with my friends and I don’t want to be so busy any more. I choose what I do and have learnt that I can’t do everything. My career looks different, my life day to day unrecognisable from before and I have found happiness in a place I never knew existed • Even with out full health, I wouldn’t change a thing. Hitting my head was the very best worst thing that happened to me • Sometimes life throws us curve balls and we must remember as humans we are innately resilient, we have the skills to adapt, and when we do, perhaps our new normal becomes exactly the life we choose to lead • • Ps the second photo was taken a few weeks ago after trekking 20km over mountain tops....progress is magic ❤️ • • #mylife #mildtraumaticbraininjury #newperspective #happy

"I could hardly hold a conversation or tolerate any light, noise, sound, and, almost overnight, I was removed from the environment that I had always been in. And for the first few months of that being really very unwell, all I could think about was 'I need to get back to hockey, we've got a Champions Trophy in China then we've got Europeans, then we've got the Olympics a year later', and actually it wasn't until my health didn't progress that I started to realise things around balance and how important my family was."

While Rainford-Brent admits "style and flair" came more naturally to her than discipline, she too had issues around life balance as part of teams striving to be the very best - although it was only after the event that she even realised there had been such an imbalance.

"I wouldn't say I knew that phrase [life balance] until I retired," she said. "As an athlete, it felt like you're in a wind-tunnel, it's head down and everyone is on this train trying to win. It's not that you weren't aware that there was family and friends and stuff outside, but it just never really got in the way of anything. Then as I've got older it's been like 'oh wow, you've got to have a few things around!'."

Danson-Bennett spoke of how difficult it is to even consider life outside sport at times while you are competing at an elite level, especially when the lesson she learned early was that it was hard work and dedication as much as talent that would provide the basis for success.

"I got invited to an England U16 trial and I was so excited!" she said. "I'd pretty much never been away from home, it was five days long, we were competing to play in an England shirt for our junior age group and, honestly, I was terrible. I was the worst there by a country mile!

"I remember at the end of five days thinking, 'well that's it, I'm never going to play for England', and then the coach sat all of us down and she said, 'right, I'm going to invite you all back in six weeks' time'. For me, it was like something just flicked in my brain, 'OK, what can I do to get myself noticed in six weeks?'.

"So I went home and my poor mum and dad - they are complete angels - I woke them up every day before school and got them to take me running; they'd cycle and I'd run. I went back to the trials six weeks later and it gave me the best start. It taught me that the most talented aren't always the most successful.

"I was there saying, 'I will work for you, teach me the skills and everything I need to learn'. I think that was a great start for me, that laid my foundation and it gave me that inner drive that this was exactly what I wanted to do. I knew I was going to have to work hard."

Danson-Bennett's medal collection is testament to the fact that she did, but after all of her success with England and Great Britain over the years, it is only since she has been taken away from that environment that she has come to appreciate the value of other parts of her life.

"We joke now that it is no coincidence that [since the head injury] we've got married, we're expecting our first baby and I've now retired," she added. "It was almost like - and I'm not suggesting that this is the way to get balance, don't go and hit your head, it is not advisable! - it was my catalyst for a different perspective but it was kind of forced upon me.

"We now say it was the best worst thing that ever happened because it did give me perspective, your family and the support team around you."