Chris Froome will miss the Tour de France after sustaining a fractured right femur, a fractured elbow and fractured ribs before stage four of the Criterium du Dauphine.

The four-time Tour de France winner was taken to hospital on Wednesday afternoon following a high-speed crash during his route reconnaissance.

Froome hit a wall after he took his hands off his handlebars to blow his nose, according to team principal Sir Dave Brailsford. The cyclist was airlifted to St Etienne University Hospital for surgery.

A statement released by Team Ineos confirmed that Froome had been ruled out of the rest of the Criterium du Dauphine and will also miss out on trying to equal the Tour de France record of five wins, when the race begins on July 6.

Brailsford said: "Even though we all recognise the risks involved in our sport, it's always traumatic when a rider crashes and sustains serious injuries.

"Chris had worked incredibly hard to get in fantastic shape and was on track for the Tour, which unfortunately he will now miss.

"One of the things which sets Chris apart is his mental strength and resilience - and we will support him totally in his recovery, help him to recalibrate and assist him in pursuing his future goals and ambitions." 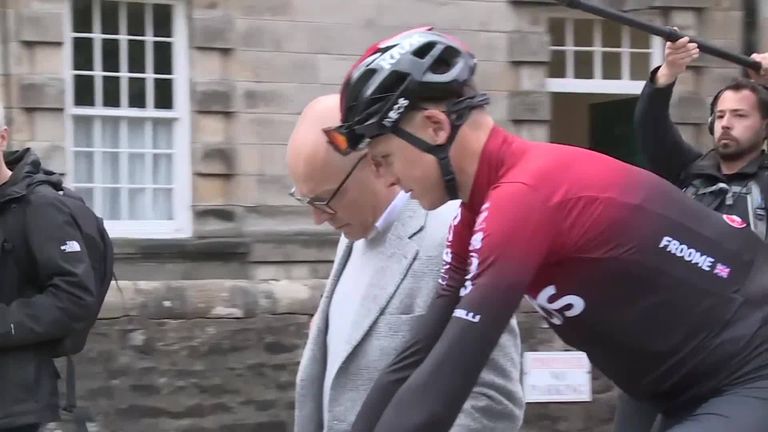 The 34-year-old was eighth in the overall classification for the Criterium du Dauphine, 24 seconds behind leader Dylan Teuns.

Later on Wednesday evening a tweet from Froome's official account - signed MF, the initials of his wife Michelle - read: "Chris is in surgery at the moment to repair the multiple fractures, please keep him in your thoughts. I hope to be able to share a message from him tomorrow morning - MF."

Froome arrived at last year's Tour de France aiming to win a third consecutive Grand Tour title, after following his Vuelta a Espana title with the Giro D'Italia last May.

He finished third as team-mate Geraint Thomas, then riding for Team Sky, became the third Briton to win the race.