Cavendish's four stage wins at the Tour de France 2021 took him level with Eddy Merckx on 34; Wout van Aert denied Cavendish a win on the 21st and final stage of this year's race on the Champs-Elysees in Paris 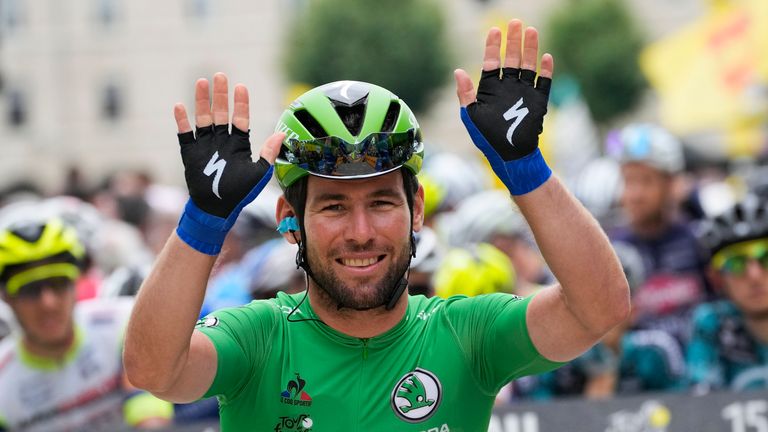 Mark Cavendish says he has yet to decide whether he will race in next year's Tour de France and attempt to break the record for the most amount of stage wins for any rider.

On Sunday, Wout van Aert denied Cavendish another piece of Tour de France history as the Belgian national champion won the 21st and final stage of this year's race on the Champs-Elysees in Paris.

A fifth stage victory of this year's Tour, and a 35th overall, would have moved Cavendish clear of the record he currently holds with Eddy Merckx.

However the 36-year-old was edged out on the run to the line and Merckx's compatriot took his third stage win of this Tour, leaving Cavendish to ponder his future in the race.

"We'll have to see," Cavendish told Sky Sports News on Monday. "I just finished the race yesterday, and normally after the Tour de France every year that I've done it I've been like 'I don't know if I can do that again' but a few days later you miss the buzz of it.

"It's different to any other bike race and you look forward to the next year but we'll have to see at the minute. I just want to spend some time with my family, I'm racing in a few weeks so I'd like to take a few days off and we'll see what the future holds."

The Isle of Man rider, who had come back from illness and injury to hit the heights again at this year's Tour, is hoping his recent revival will help inspire younger riders.

"I was on top of the world last time I was successful at the Tour de France, 2016. I won four stages, I wore the yellow jersey, I wore the green jersey, second in the Olympics, world champion - things were going good," Cavendish said.

"Then I was diagnosed with Epstein-Barr virus - it affects most people, you usually have it when you are young - and then usually when your body is tired, it can come back. It became chronic and that was that, I got depression, I got some injuries and I thought my career might be over.

"Finally this year things started to go right. It's been a three, four-year battle. It's nice to be back at this race and hopefully (I have) given hope to people not to give up.

"To come away with four stage wins, plus a fifth win for my team-mate Julian Alaphilippe, he wore the yellow jersey and then I won the green jersey, it's pretty special."

"It's what I aim for, I hope for it, I work for it, the stars kind of have to align. You never wish injury or illness on anybody, especially not your team-mates or colleagues.

"The only thing that I would like to take from it, is that if I can give inspiration and hope to people - I talked about my illness and injury - but people, especially in the last couple of years, have been in a lot worse situations than I have been.

"I just know that if you hold on to that hope, if you work hard and fight back, good things can happen."