Sir Bradley Wiggins produced an expertly measured performance to smash the UCI Hour Record with a distance of 54.526km at the Lee Valley VeloPark in London.

Wiggins moved ahead of record pace almost immediately and although he slowed slightly in the last 10 minutes, he had already done enough to eclipse fellow Briton Alex Dowsett’s previous best mark of 52.937km by 1.589km.

It was the second-largest record-breaking margin in the official history of the event and the biggest since 1894. 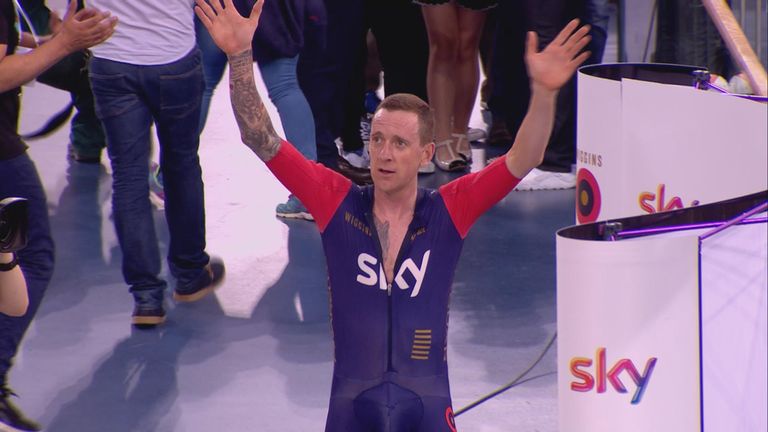 I'm glad it's done. That's the closest I will come to knowing what it's like to have a baby.

The 35-year-old fell short of his target of 55.250km due to unfavourable conditions within the velodrome, but it was nevertheless a remarkable performance that leaves the record at a daunting distance for future challengers.

Speaking to Sky Sports afterwards, Wiggins said: "I'm glad it's done. That's the closest I will come to knowing what it's like to have a baby.

"It's tortuous. It's such a relief and was such a build-up. We've been through so much - my wife and children know so much about air pressure now.

"I always compare myself to the greats and I am just glad to be in the company of those guys. To get up there and do that - to put yourself on the line takes a lot of courage and it's a mental game as much as anything."

Wiggins’ hopes of beating the 55km mark were dashed by a high air pressure of 1,036 millibars within the velodrome but, roared on by a sell-out crowd, he made light work of eating into Dowsett’s record.

After negotiating the first 10km 28 seconds faster than his compatriot and the first 20km 54 quicker, it swiftly become a matter of not if he would break the record but by how much.

It was eventually smashed with more than 90 seconds to spare and, despite now being in pain, Wiggins forged on to complete 218 laps of the 250m track.

Asked where the record ranked in his list of career achievements, he added: "It tops it off. To do everything and come here as an old man, I had such great memories here as a kid and to come here. It's memorable.

"I went to the hairdressers for a cut and a shave today and the bloke said: 'What are you up to today?' and I said 'not much really, just making history'."

Wiggins' coach, Heiko Salzwedel, added: "It was nerve-wracking because I could see that Bradley was running out of gas but he was fighting, fighting. I have never seen him fight so hard before.

"The plan went pretty well. We are learning all the time, Bradley is a different level of what I have experienced before."

Wiggins will now turn his attention towards preparing for a tilt at Olympic team pursuit gold at the Rio 2016 Games.