Jay Forster wasn't sure what to expect when he came out as trans at his ice hockey club. He hopes the first Pride Weekend in the sport in Britain helps others to feel included too

The Elite League's first-ever Pride Weekend has the potential to be a "pivotal" moment for ice hockey in the UK.

That's the view of Jay Forster, a hockey fan and amateur player from north Wales who feared he would lose the sport he loves when he came out as transgender a little over two years ago.

"To have a league-wide initiative is awesome," he tells Sky Sports. "Hockey is still seen by some as being a straight, white male sport. But if Pride Weekend makes a big splash and makes the rest of the hockey community pay attention, it can only be a good thing."

Jay did not want a lot of attention when he first posted to Facebook about being trans back in November 2017. He simply wanted to be seen, understood, and accepted; most importantly, by his club-mates at the Flintshire Phantoms in Deeside, who would be among the friends and family who would see his post.

"It's a mixed-sex club, where women occasionally play with the men's team," he explains. But this was a step beyond that, and there was no guarantee of a positive reception. "That's what worried me - I didn't want to lose hockey when I came out.

"But I mentioned the team specifically, and said, 'listen, I hope this doesn't change anything, I still want to be a part of the team - if you'll have me'.

"Every single player on that team either commented, texted me or called me to say, 'we support you, you're our team-mate, we'll back you for anything'." 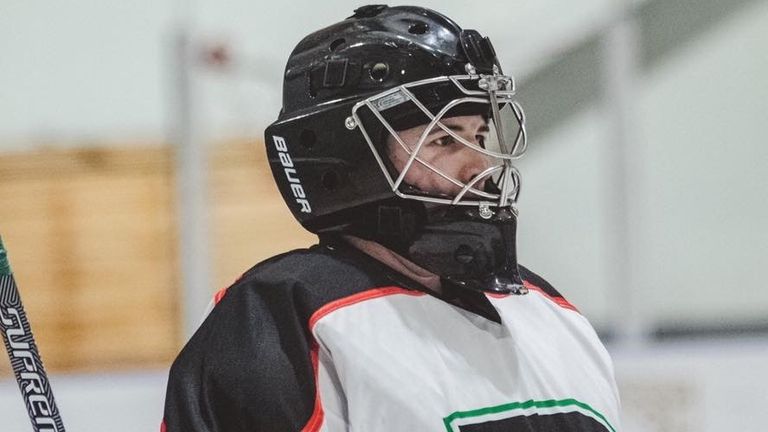 Hockey culture has this 'no homo' kind of thing... some people don't think about what they're saying, how it sounds, and who might be listening.

Jay hopes any LGBT+ person, young or old, who happens to see the Pride activity around the Elite League games this coming weekend receives the same signals. To deliver them, the League has teamed up with the US inclusion project You Can Play, which has been in partnership with the NHL since 2013, helping to organise Pride Nights across North America.

The Cardiff Devils' support for You Can Play led to them hosting a Pride Night at a regular-season match during the November 2017 Rainbow Laces fortnight, and again last February - LGBT History Month in the UK - with the Sheffield Steelers doing the same.

Then in April, Glasgow Clan fans unfurled rainbow banners and the slogan 'Hockey Is For Everyone' during the playoffs in Nottingham, sparking an even wider conversation. Now, for Pride Weekend, the Elite League is encouraging its 10 clubs to engage more meaningfully with their local LGBT groups; teams will wear specially designed rainbow jerseys which will then be auctioned off, with money going to good causes.

Attendances continue to rise in the League - the Steelers averaged crowds of over 6,000 in the 2018/19 campaign, with the Nottingham Panthers bringing in around 5,700 per game. Jay feels it's never been more important to let each fan and player feel welcome, because the message trickles right down the leagues to every level.

"I knew when I came out that I wouldn't be able to play women's hockey any longer," he explains, "but I didn't know how the men's team would react, and whether I was going to be able to go into that locker room if there was an overwhelmingly negative reaction. I don't think people would have been cruel to my face or said something directly to me, but there was that worry that it was going to be unpleasant to be around. Thankfully, it wasn't."

He had got the hockey bug a few years earlier. "I watched a couple of NHL games and then all of Sochi 2014. At that point, I was 21 and still identifying as female. I remember the women's gold medal game - Canada vs USA - and thinking 'maybe I can play this sport as well'. I did a lot of Googling." The opportunity came to attend an introductory training 'Clarke and Co' camp run by Panthers legend David Clarke, where something clicked - hitting the puck was even more satisfying than watching.

"Back home, I started playing with a local men's team, and then later for a women's team as well." The latter needed a goaltender; Jay stepped up and flourished, gaining self-confidence and a sense of belonging. But behind the mask, there was still that sense of being hidden from view; of wanting to be truly out on the ice.

A story from the National Women's Hockey League in October 2016 helped to show that was possible. Buffalo Beauts' Canadian centre Harrison Browne, a similar age to Jay, made history when he became the first out transgender athlete in a professional team sport. Accepted by team-mates and opposition players, Browne would continue playing women's pro hockey for almost two years at which point he retired in order to begin the hormonal transition which NWHL anti-doping regulations prevented.

"Harrison was really inspirational," says Jay. "I thought if he can do it, I can too." The overwhelmingly positive reaction from the Phantoms confirmed this. But his trepidation beforehand was entirely understandable. "Being a mixed-sex club, it's mixed gender locker rooms. I've always been part of that - there's never been any kind of segregation - but I was worried how that would change and develop, especially as we invited new guys onto the team. What would their response be? Would the guys stick up for me if they needed to? But everyone who's joined the club has been like, 'ah, OK - cool'."

Like other physical 'macho' team sports, men's ice hockey can be intimidating, as Jay explains. "Hockey culture has this 'no homo' kind of thing. Gay jokes sometimes get thrown around; borderline transphobic stuff too. I don't think it comes from a place of malice or aggression. But some people don't think about what they're saying, how it sounds, and who might be listening.

"That's because no one has ever told them that it's not OK to use certain words. Once you use the word 'faggot' in a locker room, any gay guy there is immediately thinking 'this is not a safe space for me to be myself'.

"Words like 'ladyboy' or 'tranny' might get said too. For the average sports fan thinking, 'well, I don't say those words'… OK, but do you call other people out when they do say them? You have to be willing to do that. Just because you don't use them doesn't mean there isn't work that you can do to make it a better environment for gay and trans people."

He thinks that, just like in men's professional football, no one wants to be the first out player. "That feeling of not knowing how people are going to respond is just awful. When I posted on Facebook that I was trans, I turned my laptop and phone off and hid in my room for eight hours."

While hockey itself has been accepting for Jay, there have been obstacles away from the sport. Having been given a waiting time of two years just to get a first appointment at a gender identity clinic - there are still only eight in England and Wales - he made the decision to go private. "I've known who I am for years. I had money saved up and thought, is this money more important than me being happy? Would I pay this amount of money to be able to look in the mirror and see someone who I want to see?

"I got in touch with the London Transgender Clinic, who were fantastic. I went and talked to a psychologist, and later I was signed off to start hormone therapy. It was about eight times quicker than the NHS." He's deeply concerned about the state of trans healthcare in the UK. "It's a joke. There are more trans people in this country than the facilities we have to treat them can cope with. In some cases, people are self-medicating without having an official diagnosis which is dangerous. But I understand why people are doing it." He is currently crowdfunding via GoFundMe to cover the costs of chest surgery. "It would take around three years if I went on the NHS so I plan to go to Poland to get surgery there instead."

'I want to help others understand'

Jay's experiences in hockey led him to write a blog in summer 2018, which he sent in to the US website Outsports. It made their front page, headlined 'I Can Pass, But Can I Play?'. "A lot more people read that than I expected, and I got loads of messages. They mostly fell into two different kinds - from other hockey fans who are trans, thanking me for being a voice; and from people saying they have a friend who's trans, thanking me for helping them to understand the journey."

His enthusiasm for the Elite League's Pride Weekend comes from knowing that there are fellow LGBT+ people and allies out there for whom hockey can be an icebreaker to a tricky conversation. "A lot of the guys I play hockey with are teachers. One of them told me the other day that he was discussing the NHS and private healthcare with his science class, and the cost of transitioning medically was mentioned. He brought me up and the kids were able to grasp it better.

"I don't want to be an inspiration as such, but I do want teenagers to know this is something that it's OK to do. If I can help their teachers to understand, and to be a safe place for these kids to go to... that's what I want."

Jay still goes to the Clarke and Co camps every summer. At the last one, he got a reminder of the impact he has made. "Someone sat down next to me and said 'hi, you wrote that article, right?' That was my first experience of meeting another trans hockey player face to face." He's hoping to get back to the States later this year to play with Team Trans, a hockey side made up of trans players including Browne that made headlines worldwide after playing their first exhibition game in Massachusetts last November.

Before then, he will be keeping across Pride Weekend, starting with the televised Dundee Stars vs Glasgow Clan match on Friday night. He hopes the Elite League players take their cue from Washington Capitals' Braden Holtby - like Jay, a goaltender - who has built a reputation as a staunch LGBT+ ally in the NHL. "Having top athletes be role models and say 'you can play' is so important to gay and trans kids," adds Jay. "Don't tell them you have to be a certain way in sports. Just get out there and tell them that you support them."

Sky Sports supports Stonewall's Rainbow Laces campaign for LGBT+ inclusion in sport, as a member of Team Pride. If you're interested in sharing your Rainbow Laces story, get in touch with us.