An in-depth look at Nate Diaz's exhaustive training sessions that have prepared him for his rematch with Conor McGregor at UFC 202.

What was the basic routine of Diaz's fight camp?

"Two work-outs per day - if there's a third, it's because its weights day or yoga day," said Diaz's fitness coach Damian Gonzalez, exclusively to Sky Sports. "Usual work-outs are a triathlon work-out and a fight work-out, two-to-three hours each with a break to eat and refuel. One day off per week." 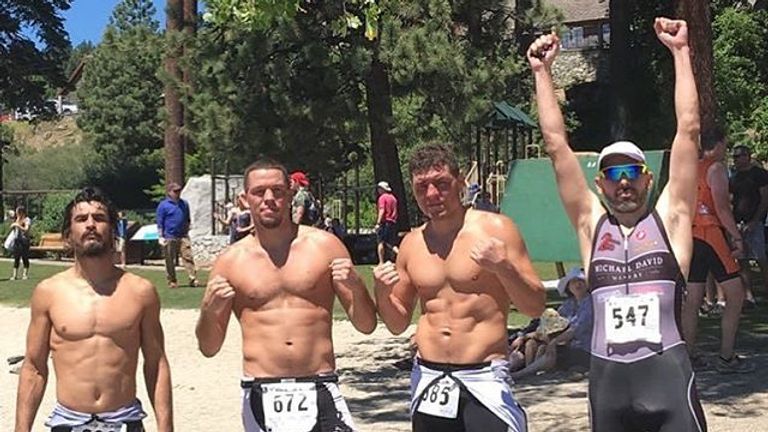 Usual work-outs are a triathlon work-out and a fight work-out, two-to-three hours each with a break to eat and refuel. One day off per week.

Diaz is known for his endurance gained through triathlon training. Was this a part of the fight camp?

"Nate did a triathlon a month out [from the McGregor fight]," said Gonzalez, a pro triathlete. "Even if he doesn't race, swimming, biking and running are part of his training.

"We do mostly XTERRA triathlons which are even better for a fighter. When you're on the mountain bike you use your whole body, on a triathlon bike you use just your neck, legs and back. Mountain bikes teach you to brace yourself. This stuff is scary - these guys are more scared of downhill cycling than fighting.

"This is Nate's best year so far. He's got that lifetime fitness of an endurance athlete from doing triathlons."

What is an XTERRA triathlon?

There's an urban myth that Diaz has swum across San Francisco Bay to Alcatraz. Surely not...

"Yes, there's a triathlon where you swim from the island to the mainland, it's a mile-and-a-half swim," Gonzalez said. "Swimming works your full body - your cardio and your muscles and your core. Adding running and mountain biking turns you into a super-fit, solid, durable person."

So it's safe to say Diaz enjoys triathlons?

The American fighter told UFC: "It keeps me living healthy, I've been competing in triathlons since I was 18-years-old. People say 'you compete in triathlons because it helps with your fighting'. But nowadays I like to think I fight so I can afford to pay for some good races." 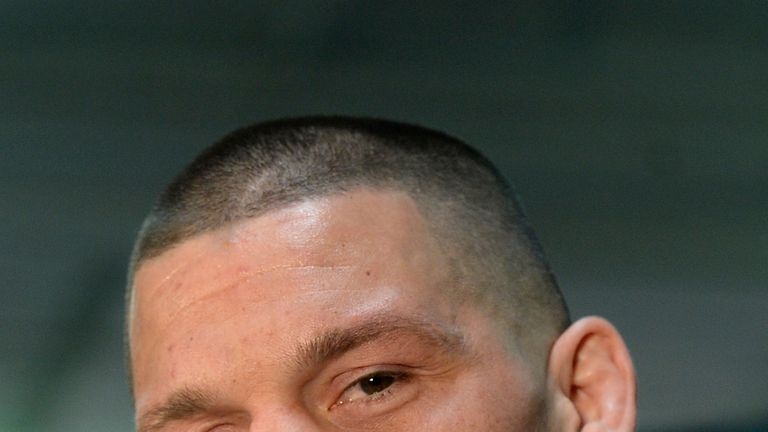 Nowadays I like to think I fight so I can afford to pay for some good races.

Let's head into the weights room! I bet Diaz can lift?

"He does weights once or twice a week," explained Gonzalez. "The weights are not super-heavy, it's to build functional strength, not necessarily to become powerful. We do medium weights so they can move quicker. He's been lifting consistently year-round. Early in the week, we do an extra work-out which is an hour of weights."

That's the physical stuff covered. In terms of skills, what's Diaz up to?

His California base involves several gyms but his main training partners are always the same: Gilbert Melendez, Jake Shields and his brother Nick are never far from Diaz's side.

Diaz is a vegan, right? It's surprising that an athlete doesn't eat meat...

"I cut out meat for competition and when I put it back in, my body was already used to not having it, so it didn't sit well with me. It happened with dairy - cheese and stuff - so I cut that out."

How can you be certain that Diaz is so fit?

"VO2 max and physiological tests," Gonzalez explained. "These tests give me a base-line of how far to push him. If he runs - how long? For an hour, but how? We do different things depending upon which phase we're in. We use these tests to figure out where his fitness is."

Damian Gonzalez is a professional triathlete who has been a long-time coach for Nate and Nick Diaz. He owns supplement company Cranked Naturals.