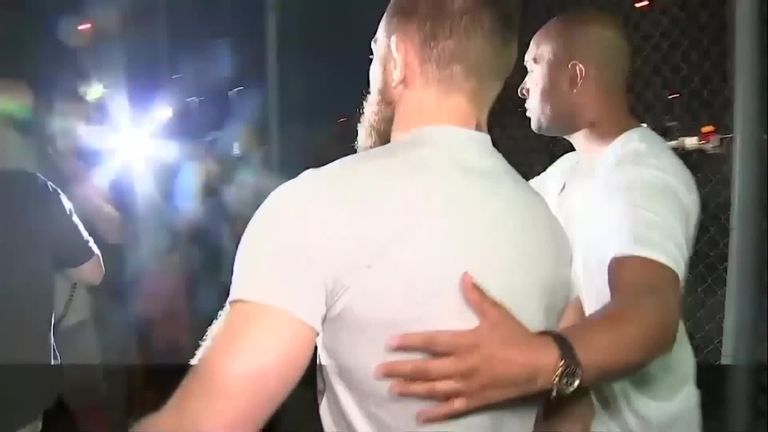 Conor McGregor has been arrested in south Florida for allegedly smashing and stealing a man's phone after he tried to take a picture of the UFC star.

McGregor, 30, faces charges of strong-arm robbery and criminal mischief, according to the Miami Beach Police report.

The incident took place as McGregor was leaving The Fontainebleau Miami Beach hotel at 5.20am local time.

According to the police report, a 22-year-old man attempted to take a picture of McGregor, who slapped the phone out of his hand and then stomped on it several times. McGregor then grabbed the phone and left the area.

The Irish fighter was released Monday night after paying his $12,500 bail.

His attorney, Samuel J. Rabin Jr., said in a statement: "Last evening Conor McGregor was involved in a minor altercation involving a cellphone that resulted in a call to law enforcement.

"Mr McGregor appreciates the response of law enforcement and pledges his full co-operation."

Miami Beach police said they would not be releasing more details.

Patience in this world is a virtue I continue to work on. I love my fans dearly. Thank you all ❤️

"Patience in this world is a virtue I continue to work on. I love my fans dearly. Thank you all," McGregor said on social media on Tuesday morning.

According to the Miami Herald, the 30-year-old has been in Florida for a couple of weeks on holiday as he prepares for his comeback.

McGregor lost his last fight in October 2018, to Khabib Nurmagomedov, and also lost a boxing match to Floyd Mayweather in August 2017.

He was suspended from UFC for six months and fined $50,000 for his part in a brawl after his loss to Khabib in October.