Jake "Jack Swagger" Hager is taking Bellator MMA seriously as he prepares for his third professional fight - live on Sky Sports this Saturday night at 2am.

Hager is itching to get back into the Bellator Cage when he fights newcomer Anthony Garrett on the main card at Bellator 231.

The former WWE Heavyweight Champion spent over 10 years in the entertainment business, before severing ties with owner Vince McMahon and the company in order to pursue a professional mixed martial arts career.

It's something the Oklahoma-born fighter is taking very seriously.

Speaking exclusively to Sky Sports' Raz Mirza, Hager recalls how he got the MMA "bug" after watching a live UFC fight.

"We went to watch the fight and I really got the bug for it, I was watching the Heavyweights and I began to see more and more that I could compete with these guys.

"It was almost a perfect storm in the way that it happened.

"We were in contract negotiations with WWE, where I felt disrespected, and so it gave me the motivation to go and prove to the world what I'm worth.

"It's been an incredible three years on this journey with great teammates and coaches around me.

"For me, I felt WWE were treating me a different way to other people, cancelling dates out of nowhere. I was working so hard, as well as being away from my family 300 days a year.

"I gave my back, my neck, my body essentially to build on this dream.

"I couldn't even get a sit down with owner Vince McMahon or Triple H [Executive Vice President of Talent] to talk about the future."

Everyone has a plan, until they get taken down.... pic.twitter.com/QSwgPhsHSc

A phone call to former Ultimate Fighter turned UFC star Josh Rafferty was the turning point in enabling Hager to achieve his MMA goal and he was soon paired up with trainers Rob Radford and Joey Best.

And so the journey began.

He remains unbeaten, albeit having only fought twice since joining the company in 2017.

Hager defeated JW Kiser in January before recording another first-round win over TJ Jones in May. Now the 37-year-old is preparing for his third fight of the year. 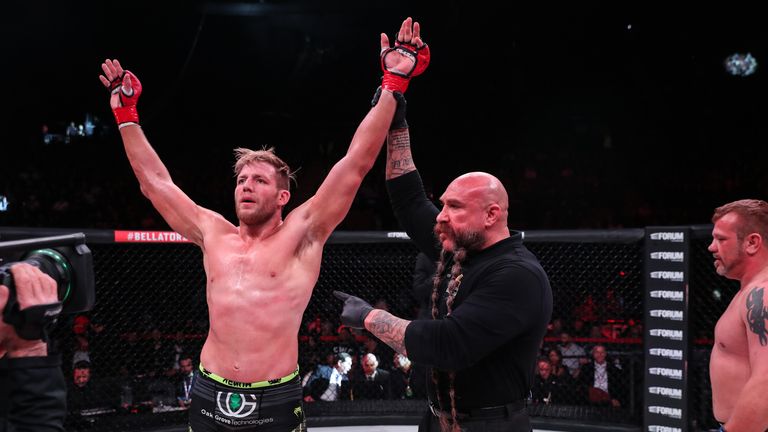 I just try and stay grounded, stay humble and bring out the swag when it's necessary.

"I feel good but I feel that having all this instant success can just as easily disappear. We're in 2019 and to keep people's attention is very difficult," said the 6ft 7in, 254lb Hager.

"I don't want to toot my own horn or say I made it, ever. I just want to keep my foot on the gas and keep working hard; I'm just that type of person. I just try and stay grounded, stay humble and bring out the swag when it's necessary.

"I think that's a really tough quality to have because you don't see it a lot these days. I try to use it to my full advantage and I went back to that principle."

Hager trains out of Dave 'Batista' Bautista's gym in Tampa, Florida where the two former WWE stars have come to blows.

"Talk about success, he's incredibly busy but we talk and whatnot, he's a great coach from afar with his MMA background so he's been a great help," Hager said.

"Hopefully, people are going to see that I've really improved a lot, since May, when I fight Garrett and that I'm not playing games.

Vote and RT for the open weight title

The 32-year-old has repeatedly called out Hager on social media, saying he would get "knocked out", with Chalmers even resorting to setting up a poll on twitter asking his followers who would win should the pair ever meet in the Bellator Cage.

Hager said: "I've seen a tweet from him but I don't really pay attention to that.

"I wish I could be a pimp from Oakland or a cowboy from Arizona, but it's not Halloween so it's just silliness that I don't pay attention to."