Extreme E series starts this weekend with the Desert XPrix in Saudi Arabia, live on Sky Sports; presenter David Garrido answers the key questions for the all-new motorsport, as well as guiding through the teams and cars; watch the action at 7am and 12pm on Saturday on Sky Sports Mix 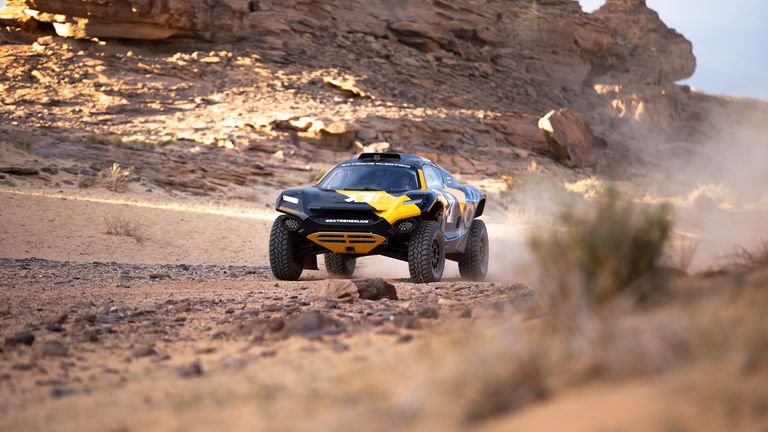 The first-ever season of a unique, brand new motorsport, Extreme E, gets under way live on Sky Sports this weekend.

Don't know what it's all about? Then read on - here are all the main questions answered by Sky Sports presenter David Garrido.

So, exactly what is this 'Extreme E'?

Extreme E is an exciting new motorsport, racing all-electric SUVs off-road in five different venues across diverse, challenging terrains. These venues are located in some of the most remote places on earth, and they've been chosen because these places have been devastated by the effects of climate change.

As such, as well as the sporting spectacle, Extreme E is deliberately set out to highlight the destruction of the planet and inspire people, companies and locations to take positive steps in climate action. The use of electric vehicles is part of the solution, and also a chance for teams and manufacturers to test and showcase their latest automotive technology.

This sport is the brainchild of Alejandro Agag, a Spanish businessman previously involved in Formula 1 with drivers such as Romain Grosjean and who also founded Formula E, the all-electric single-seater city-centre series.

There are nine teams, each with one male and female driver (gender equality being another pillar of Extreme E), including famous names from many different motorsports.

Also among the driver line-up are former world rally champions Sébastien Loeb who won nine straight titles between 2004 and 2012 and twice-winner Carlos Sainz who has three Dakar Rally crowns.

Rallycross is represented mainly by Swedish trio Johan Kristoffersson, Timmy Hansen and Mattias Ekström who between them have won the last five world titles. 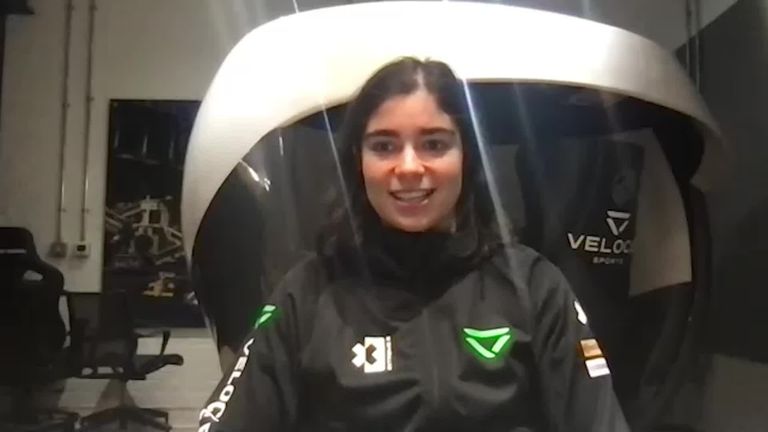 As for other British interest, Jamie Chadwick is the current W Series champion and a development driver with Williams F1, while Catie Munnings lifted the Ladies Trophy at the European Rally Championship in 2016. The other Briton involved is Oli Bennett, who won seven out of nine races in the 2017 British Rallycross Championship.

Behind the scenes, there are further F1 links with McLaren Racing CEO Zak Brown as Andretti United's team principal, while Adrian Newey, Chief Technical Officer at Red Bull Racing, and ex-driver Jean-Eric Vergne are both with Veloce Racing.

How does the racing work?

All the action takes place over two days. On Saturday all the teams will do two qualifying runs of the course, with the male and female driver each driving a lap and a changeover (known as 'The Switch') in between. Each of these runs will total roughly 18 kilometres, and their combined times will produce an order.

Points are awarded by placing, as you go from first (XPrix winner) to ninth place (third finisher in 'The Shootout').

There are other unique features to spice up the racing yet further, such as 'Hyperdrive': whoever performs the longest jump on the first jump of each race is awarded an additional boost of speed, and that team also gets an extra championship point. No fans will be in situ at the races (to keep the series' carbon footprint to a minimum), but the 'Gridplay' feature lets them vote for their favourite driver to gain grid advantage. The team who receives the most votes can select its grid position for the final, but if they're not in it, they can gift their votes to another team of their choice. The team with the second-most votes gets second choice of grid spot, and so on.

As part of Extreme E's sustainability drive, each vote also includes a micro-payment towards the master charity / Legacy Programme. (More on this later.)

Where are the venues for the races? 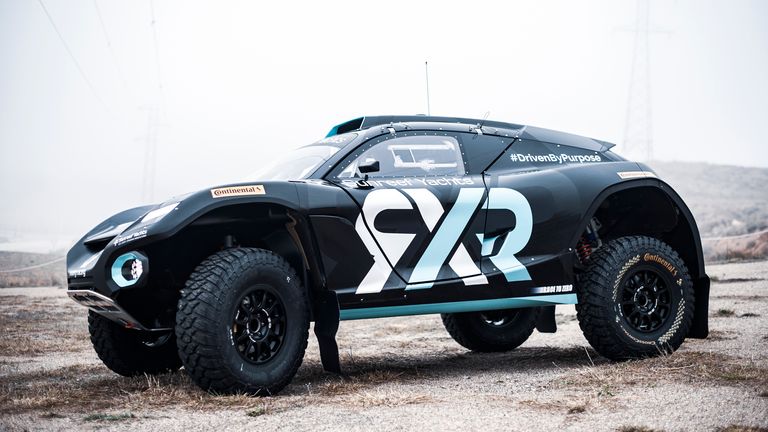 Strap yourselves in, this is going to be quite some global expedition.

There are five different venues for the races in Extreme E's inaugural season, all themed around different remote locations and related environmental issues. They start in AlUla in Saudi Arabia for the Desert XPrix in early April, then head to Lac Rose in Senegal in late May for the Ocean XPrix.

Then there's a gap of roughly three months before round 3 in Greenland on the Russell Glacier near Kangerlussuaq (Arctic XPrix) at the end of August, and after that we head south - to Santa Maria, Belterra in the Pará region of Brazil for the Amazon XPrix in October and finally Tierra del Fuego in Argentina for the Glacier XPrix in mid-December.

What's the car they're using?

It's called the Odyssey 21, and it's essentially an oversized electric buggy. The vehicle is manufactured by Spark Racing Technology, and there is Formula 1 involvement here too with McLaren providing the drivetrain and Williams the electric battery, while Continental supply the tyres. It was unveiled to the public at the Goodwood Festival of Speed in June 2019 and then had a decent run-out at the Dakar Rally in Saudi Arabia in January 2020, with Ken Block finishing third on the final stage in the car category. Not a bad debut.

The fact it's electric isn't just significant in terms of the way it's driven, but also primarily its weight. It's a 1,650-kilogramme, 2.3-metre wide beast, and yet it races up to 60 miles per hour in just 4.5 seconds. With 550 brake horsepower, the Odyssey 21 can reach a top speed of 120 miles per hour and tackles gradients of up to 130 per cent.

Very minimal tweaking to the cars can be done by teams, basically restricted to bodywork, but of course each team will have their own specific livery. As an electric SUV, it is far quieter than its internal combustion engine petrol or diesel equivalent, but it also features instant torque and very quick acceleration. The drivers I've spoken to have also praised its driveability, but one told me that one of the challenges is simply trying to get the thing to stop…due to its weight.

How will the cars' batteries be charged? They've got a super-low-carbon solution for that as well: hydrogen fuel cells. This innovative idea from British company AFC Energy uses water and sun to generate hydrogen power. Not only will this process emit no greenhouse emissions, its only by-product will be water, which will be utilised elsewhere on-site.

Want a fun fact about the car? Of course you do. Here you go: the stored energy in the battery inside the Odyssey 21 could keep 2,600 mobile phones charged for a week.

How do the cars get to the venues?

A-ha! This is another twist, and perhaps one of the most significant unique selling points of the series.

They'll be transported from venue to venue aboard the RMS St. Helena, a former Royal Mail passenger-cargo vessel which has undergone an extensive refit to transform her into Extreme E's operations hub.

But moving the cars around isn't her only use. As well as serving as a 'floating paddock', the St. Helena will carry all other equipment required to the race locations, a 50-person crew and she will also house laboratories for scientists to carry out invaluable research on climate change and ocean pollution and contribute to the championship's legacy programme (more on that later), and its sustainability cause.

By choosing the seas over the skies, Extreme E's carbon footprint in terms of logistics will be reduced by two thirds, compared to travelling by air freight. And there are other examples too. The ship's propulsion units and generators run on ultra-low-sulphur diesel, the St. Helena uses low-energy LED lights, low-consumption bathroom fittings and even chairs made from recycled plastic bottles collected from the Mediterranean Sea. Every little helps.

So, what are these legacy programmes you mentioned?

Along with environmental awareness and gender equality, Extreme E also wants to make a tangible impact, leaving the venues it will visit in a better state than how it found them. To that end, it will be involved in local activities so that it can meaningfully contribute to the rehabilitation of these areas which have been ravaged by climate change in different ways.

In Saudi Arabia, for the Desert XPrix, they'll support the Great Green Wall initiative which aims to create a barrier of trees and protective landscapes across the Sahel-Sahara border and the drivers will also visit a local turtle conservation project. In Senegal, the legacy programme will support Marine Protected Areas to try to safeguard and revive aquatic diversity, as well as running plastic clearing initiatives on the beach in Dakar, and the drivers will be helping to plant mangroves - one million trees are to be planted across 60 hectares. 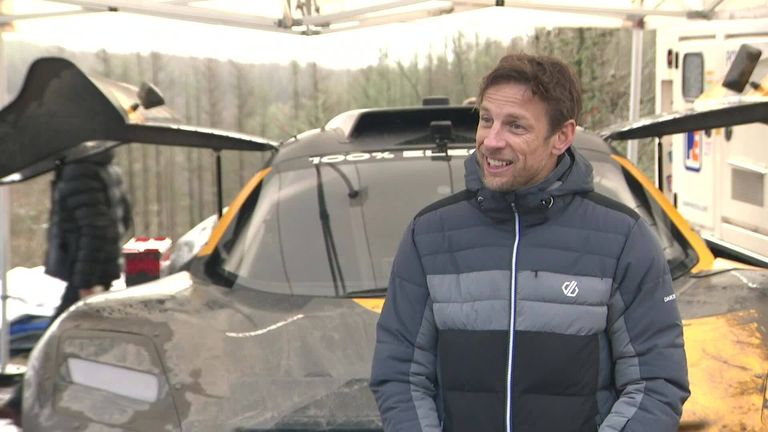 The same goes for Greenland where Extreme E will support the territory's plans to fully transition to 100% clean energy sources and join forces with UNICEF Greenland to educate children about the impacts of climate change; the Amazon where they'll work with existing conservation organisations to protect and replant an area with agroforest, providing crops that can be harvested by locals; and finally the southern tip of Argentina where the ice is receding at an alarming rate. If that continues, most if not all of the cirque glaciers in Patagonia and Tierra del Fuego will disappear during the next two decades, and both valley glaciers and the Patagonian ice sheets will be severely reduced as well.

Okay, I'm in. Where can I watch Extreme E?

All sessions of all race weekends will be broadcast live on Sky Sports Action and/or Sky Sports Mix, kicking off with the first qualifying session from Saudi Arabia at 7am BST on Saturday, April 3.

On top of that, Sky will broadcast 'Electric Odyssey', a 20-part epic transglobal magazine show series targeting an environmentally-aware audience with a passion for adventure, which will help fill the gaps between the five rounds of racing.

This unique Extreme E journey is just starting, and it's set to be an extraordinary, exciting and impactful eight months ahead, both on and off "track".