Artem Severiukhin, 15, has apologised after he appeared to perform a Nazi salute and laugh when celebrating his victory in round one of the FIA Karting European Championship; Russian driver, who is competing with Italian license, set to have contract terminated by his team 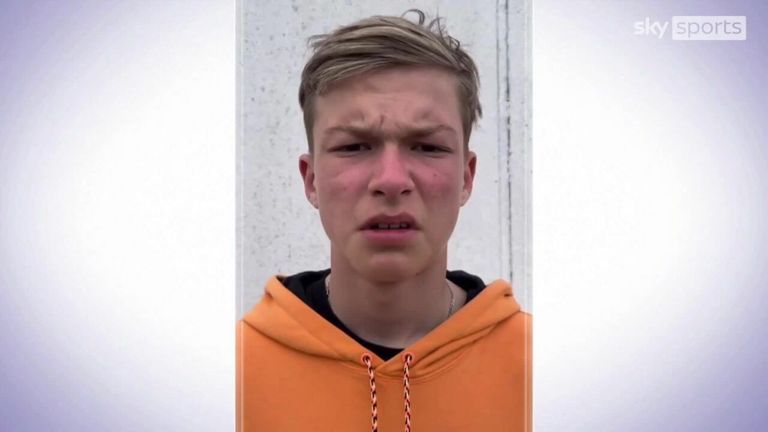 The FIA is investigating the "unacceptable conduct" of a Russian go-kart driver following his actions on the podium after winning a race on Sunday.

Artem Severiukhin, 15, appeared to perform a Nazi salute and laugh when celebrating his victory in round one of the FIA Karting European Championship at Portimao.

He has apologised and said he has "never supported Nazism and consider it one of the most terrible crimes against humanity".

The FIA, motorsport's governing body, said it was looking into the incident, footage of which has been widely circulated and condemned on social media.

"The FIA confirms it has launched an immediate investigation into the unacceptable conduct of Mr Artem Severiukhin that occurred during the podium ceremony for the OK category at Round 1 of the 2022 FIA Karting European Championship at Kartodromo Internacional do Algarve in Portugal," read a statement on Monday.

"The FIA will communicate shortly on the further steps that will be taken in this case."

Severiukhin, who pounded his chest before raising his right arm, was competing in the championship with an Italian license due to the FIA's ban on Russian competitors following the country's invasion of Ukraine. The Italian national anthem was playing as he made the gesture.

Severiukhin, however, has denied giving a Nazi salute.

On Monday he posted a video message on the Russian Automobile Federation's Telegram channel in which he said: "I would like to apologise for what happened yesterday at the European Karting Championship.

"Standing on the podium, I depicted a gesture that many perceived as a Nazi greeting. But that's not true - I have never supported Nazism and consider it one of the most terrible crimes against humanity."

Explaining his chest-thump as a routine way of expressing gratitude, he added: "I was performing under an Italian licence and won the race under the Italian flag. The guys in front of the podium were telling me that in Italy to show your gratitude in such cases, it's a custom to hit oneself on the chest in the heart area.

"I just wanted to perform that gesture. I can't explain how the rest happened.

"Ward Racing is deeply in shame of the pilot's behaviour which it condemns in the strongest possible terms," they said. "Action will promptly be taken accordingly.

"The actions of Artem Severyukhin during the award ceremony on April 10, 2022 were exclusively individual and do not represent the views and values of Ward Racing in any manner. On the contrary, Ward Racing stands with the international community condemning Russia's invasion of Ukraine and expresses its solidarity with the people suffering because of this unprovoked and horrific attack.

"Ward Racing accordingly condemns the personal actions of pilot Artem Severyukhin during the award ceremony on April 10, 2022 in the strongest possible terms, as it considers them a manifestation of unsportsmanlike behaviour, an unacceptable violation of the ethical and moral sports codex.

"With this statement, Ward Racing expresses its opinion, as well as the opinion of all athletes and staff of the Ward Racing team. On the basis of these considerations, Ward Racing sees no possibility for continued cooperation with Artem Severyukhin and will proceed with terminating his racing contract."

The Russian Automobile Federation, members of the FIA, are "clarifying the circumstances of the incident" but have stressed that they consider "unacceptable any, even an accidental manifestation of fascism and Nazism in Russian motorsport and among Russian athletes".

"The Russian Automobile Federation reports that it is aware of what happened on Sunday, April 10, at the awards ceremony for the first round of the European Karting Championship in Portugal, when Russian athlete Artem Severyukhin, who was driving under an Italian license and for the Swedish team, made a gesture that some perceived as 'Roman salute'," they said.

"At the moment, the Russian Automobile Federation is clarifying the circumstances of the incident and the athlete's act, and is also analysing the comments of the parties in connection with this.

"The Russian Automobile Federation informs that Artem Severyukhin was released from the RAF and competed in the European Championship under an Italian license, which is why Artem has the Italian flag on the protocol and the Italian anthem sounded on the podium.

"We also report that we consider unacceptable any, even an accidental manifestation of fascism and Nazism in Russian motorsport and among Russian athletes.

"Our further comments on how the incident will be regarded and what measures will be applied to the athlete will follow later, after the meeting of the RAF Sports Council."

Severiukhin had just won his first race of the season in the OK category, which is for drivers between the ages of 11 and 15. The FIA Karting European Championship is a reputable series, with current Formula 1 stars Max Verstappen, Lewis Hamilton and Lando Norris all having won titles during their junior careers.