Sky Sports unites against online hate and abuse: 'It has to stop'

"It's not OK to say some of the things that people say on social media. It has to stop."

Presenters from football, boxing, F1, basketball, Sky Sports News and horse racing are among those who are sharing their own experiences to highlight the extent of this abuse on digital and social sites and the damage it can cause.

In a video produced by Sky and published on the day Sky Sports announced a campaign against online hate, the presenters are united in saying 'enough is enough' and that it's time for the hate to stop and for everyone to be able to enjoy sport.

Sky Sports Premier League analyst Micah Richards added: "I have been a victim of racial abuse online as have so many others. It is - of course - horrible to receive and the negative impact such comments have can outweigh all the positive aspects of social media.

"These commitments are a positive step as large publishers like Sky Sports need to use their voice to address some of these issues, help educate and ultimately eradicate all forms of online abuse."

Sky Sports boxing presenter Anna Woolhouse, herself the subject of online abuse about the death of her brother, says that while TV personalities become accustomed to the abuse, she is worried for those who aren't able to deal with it.

"You do develop a bit of a rhino skin doing this job," said Woolhouse. "But I worry about those that don't have a thick skin and haven't got a support network around them. It might be children; it might be someone suffering with a mental health issue.

"What happens then when the damage is irreparable? It just doesn't bear thinking about. It's not ok to say some of the things that people say on social media. It has to stop."

Former England international Lianne Sanderson told Sky Sports News just how hurtful abusive online messages can be, especially when they focus on race or sexuality, rather that performances on the pitch.

"It is hurtful. I think sometimes people think because you are in the public eye, you're superhuman," said Sanderson.

"But we're all equal, we all come from the same place, and sometimes I don't think people realise how hurtful their words can be." 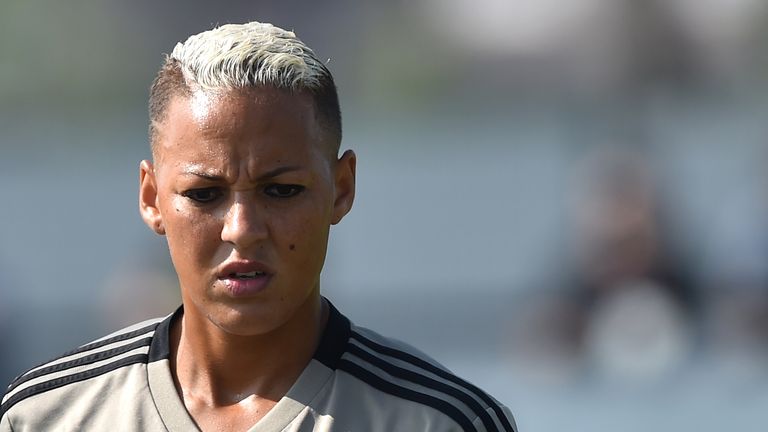 As for the sort of abuse she herself has suffered, Sanderson added: "There would be derogatory remarks about the colour of my skin and my sexuality.

"People can say you are not a very good footballer if they want, but when they start to say things about the colour of your skin, your race, your sexuality, that is when it affects you.

"I don't really understand why people have to do that. That's when it can be a little hurtful."

More than 40 million users engage on Sky Sports' channels on digital and social media platforms (Instagram, Facebook, Twitter and YouTube) which have seen a spike in hateful comments on the basis of race, colour, gender, nationality, ethnicity, disability, religion, sexuality, age and class.

Sky Sports is committed to inspiring change. To help tackle online hate, Sky Sports has put in place a series of actions to counteract the behaviour of a minority of users.

Director of Sky Sports News & Digital Publishing Mark Alford said: "We're proud to talk about sport with more than 40 million users of Sky Sports social and digital platforms across the world. We love to see the passion for sport when we engage with sports fans discussing and debating subjects that mean so much to them.

"Unfortunately, there is a small minority who use digital platforms to post hate, abuse and profanity against our content and our people. This needs to stop. We would like the major social media companies to do more to stop harmful content on their platforms. They have the best tools and visibility to act against abusive or hateful comments and owe a duty of care to their users. The onus should be on the social media platforms to behave like responsible publishers.

"We commit to making skysports.com free from abuse and will strive to make our channels on social media a safer space for all sports fans."

A spokesperson for Facebook and Instagram told Sky Sports: "We do not want hate speech on our platforms and we invest heavily in people and proactive technology to find and remove it.

"We have also introduced features to give people more control over their experience, including a setting for public figures to prevent people they do not know from sending them a message. We know there is more to do and we look forward to working with Sky - and others - to tackle this issue."

If you see a reply to Sky Sports posts and/or content with an expression of hate on the basis of race, colour, gender, nationality, ethnicity, disability, religion, sexuality, age or class, please copy the URL to the hateful post or screengrab it and email againstonlinehate@skysports.com