Islam Makhachev capped his ascent to the lightweight throne with a win by arm triangle choke against Brazilian Charles Oliveira; TJ Dillashaw suffered a dislocated shoulder against Aljamain Sterling and continued until referee Mark Goddard called a halt 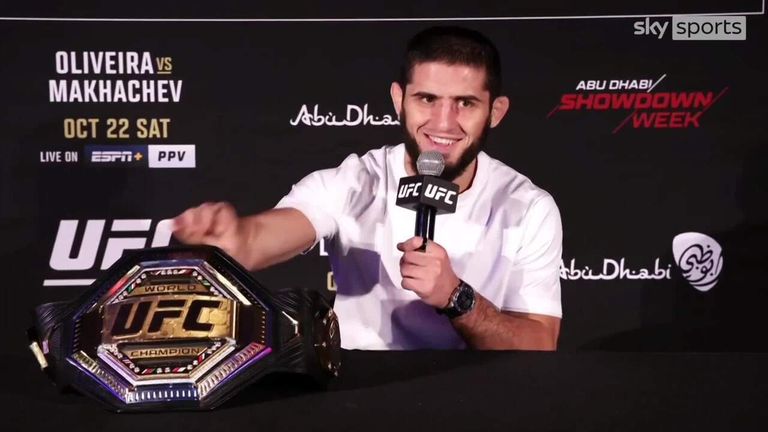 Islam Makhachev pulled off a submission win over Charles Oliveira to win the lightweight title and Aljamain Sterling beat TJ Dillashaw by TKO to claim the bantamweight belt at UFC 280 in Abu Dhabi on Saturday.

Makhachev capped his ascent to the lightweight throne with a win by arm triangle choke against Brazilian Oliveira, the holder of the UFC record for submission wins with 16.

Oliveira was stripped of the lightweight belt in May when he missed the weight for his title clash with Justin Gaethje and though he beat the American the title remained vacant, setting up the showdown with Russian Makhachev.

After spending much of the first round defending and trying to threaten with submissions off his back, Oliveira tried to keep the fight on the feet in the second round.

That tactic looked like it was paying off until he was decked by a punch from Makhachev, who wasted no time jumping on his opponent, locking in the choke and forcing the tap for Oliveira.

Makhachev dedicated the win to his late coach Abdulmanap Nurmagomedov, who died in 2020, saying: "Many years ago he told me just train hard and I will be champion",

He then handed the belt to Khabib Nurmagomedov, who took over from his father as the Russian's coach and is himself a former UFC lightweight champion.

Makhachev's 11th submission win moves the 31-year-old to a record of 23 wins and one loss as a pro.

In the co-main event TJ Dillashaw, who had to give up the belt and serve a two-year suspension after testing positive for EPO in 2019, suffered a dislocated shoulder early in the first round but somehow made it through the first frame.

Reigning champion Aljamain Sterling did not let up and Dillashaw's shoulder popped out again in the second round, allowing the 33-year-old Jamaican-American to take him down and dominate him until referee Mark Goddard called a halt.

"I probably popped it out about 20 times in training camp... I told the ref in the back that my shoulder is probably going to pop out, we'll put it back so if it does don't stop [the fight]," American Dillashaw said in his post-fight interview.

In the main card's other big fight, American Sean O'Malley won a close split decision over Russian Petr Yan after a three-round brawl to put himself in pole position for a shot at the bantamweight title.