George Floyd, a 46-year-old black man, died while being restrained by Derek Chauvin, who is white, during his arrest in Minneapolis; reacting to the verdict, Formula 1 world champion Lewis Hamilton said: "This is monumental, George's death is not in vain."

Lewis Hamilton has described the jury's decision to unanimously convict Derek Chauvin for the murder of George Floyd as a "monumental" moment and "a new dawn in the fight for racial justice."

Writing on Instagram in reaction to the news that Chauvin had been convicted on all charges, Formula 1 world champion Hamilton wrote: "JUSTICE for George! The emotions I feel right now are hard to describe.

"Derek Chauvin has been found guilty. This is the first time that a white officer has been convicted for killing a Black man in Minnesota. This is monumental, George's death is not in vain.

"The result of the Derek Chauvin trial today was is the right one. Convicting him of all three charges marks a new dawn in the fight for racial justice.

"This trial was an opportunity for the justice system to hold Derek Chauvin accountable for his actions when he took the life of George Floyd. We can now breathe a collective sigh of relief that the right decision has been met, and that justice has been served.

"Today's outcome is a sombre victory for George and his family, but it shows that our efforts to promote justice are not in vain. Black voices have been heard and action is happening. When we stand together, we can make a difference.

"But this is just one step on the path towards a more equal society. Since George's death, so many other Black people have died at the hands of the police and we must ensure the momentum of today continues. The fight isn't over, and there is more to be done, but we can consider today a glimmer of hope.

"My thoughts and prayers are with George's family. I hope they will feel a sense of peace from this result."

Mr Floyd, a 46-year-old Black man, died while being restrained by Chauvin, who is white, during his arrest in Minneapolis in May 2020.

Video filmed by bystanders, showed Chauvin's knee pressed into Mr Floyd's neck and back for almost nine minutes as he gasped for breath.

The footage shocked the world and sparked global protests about racism and police brutality.

From Lewis Hamilton's raised fist on the podium to Premier League teams taking a knee, the world of sport has been at the forefront of the Black Lives Matter movement...

An unarmed Mr Floyd had been apprehended after being accused of trying to use a counterfeit $20 bill to buy cigarettes in a neighbourhood shop in Minneapolis - something senior police officers had said would not normally warrant arrest.

However, Chauvin's lawyer had argued the former officer had acted reasonably because Mr Floyd kept struggling and he had actually died due to drugs found in his system - arguments both dismissed by the guilty verdict.

US president Joe Biden says the verdict to unanimously convict Chauvin for the murder of Floyd is a step forward in the march towards justice in America.

He said: "Today's verdict is a step forward. I just spoke with the governor of Minnesota, who thanked me for the close work with his team, and I also spoke with George Floyd's family again.

"A remarkable family with extraordinary courage. Nothing can ever bring their brother, their father back, but this can be a giant step forward in the march towards justice in America." 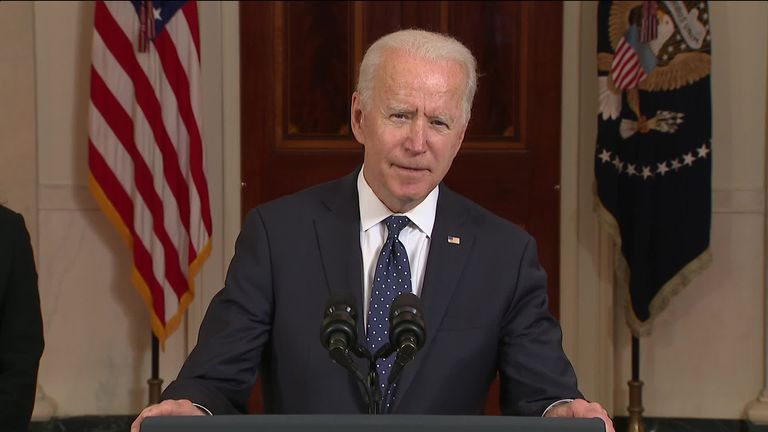 How the sporting world reacted

Most of North America's sports leagues were quick to respond to the news. The NFL, NBA, NHL, MLS and WNBA all issued statements praising the verdict and promised to do more to fight racism.

The NFL said: "Today's outcome in the Derek Chauvin trial in Minneapolis does not undo the loss of life.

"Mr George Floyd should be here with us today. Our hearts remain with the Floyd family, and we understand the pain, anger and frustration does not go away even when justice is delivered.

"Importantly, even as we identify reasons for hope, we must continue to help move our society toward a more equal and just tomorrow.

"We are proud to partner with NFL players and clubs and remain committed to do the important work needed to make positive change in our society."

The MLS said: "Major League Soccer is united in unequivocally condemning violence, discrimination, and hate in all of its destructive forms and stands in solidarity with George Floyd's family, friends, the Black community, and its allies.

"While today's verdict cannot cure the indescribable pain of a human life violently taken, it honors the sanctity of George Floyd's life and reaffirms that a Black life matters.

"MLS, its clubs, the MLSPA, and its players will continue to take actions to advance equality, peace, and healing. Justice for one must not overshadow the cry for equal justice for all."

'Much more work to do'

The NBA and its players led the Black Lives Matter movement from the front throughout, postponing three playoff games in August following the police shooting of another black man, Jacob Blake, in the city of Kenosha, Wisconsin.

The move triggered similar demonstrations across other sports with MLB, MLS and WNBA also postponing games, while four-time tennis Grand Slam champion Naomi Osaka joined the protests by pulling out of a tournament after reaching the semi-finals.

NBA side Milwaukee Bucks, who boycotted an NBA play-off game last August, welcomed the news, believing justice had been done.

"The Bucks organisation is encouraged that justice was served by the Derek Chauvin verdict in the horrific murder of George Floyd," the statement said.

"While this decision provides accountability to this police officer for his heinous crime, we must continue to address police officers' excessive use of force and immediate escalation when engaging with people of colour."

Los Angeles Lakers all-star LeBron James, one of the sporting world's loudest voices in the fight against police brutality, had just one word to describe the verdict: "ACCOUNTABILITY," he tweeted.

Minnesota Timberwolves center Karl-Anthony Towns posted: "Justice and Accountability! Things I never thought I would see. There's much more work to do, but this is an amazing start working toward the reform this country NEEDS!"

"George Floyd's murder was a flashpoint for how we look at race and justice in our country, and we are pleased that justice appears to have been served.

WNBA commissioner Cathy Engelbert added: "This past year, we have witnessed traumatizing instances of police brutality that Black Americans disproportionately experience, with the murder of George Floyd at the forefront of the conversation.

"While this verdict represents a step toward justice, we are reminded that justice is too often not the outcome for people of color.

"The WNBA/WNBPA Social Justice Council will continue its work to combat injustice and inequality in our country and hope this represents a true turning point for how the effects of systemic racism begin to be addressed."

Professor Kenneth Shropshire, chief executive of the Global Sports Institute at Arizona State University, says athlete activism has played a key role in highlighting the murder of George Floyd and racial injustice in the United States.

He told Sky Sports News: "I think we have to give the sports world a lot of credit for the focus that's been brought on the issue. 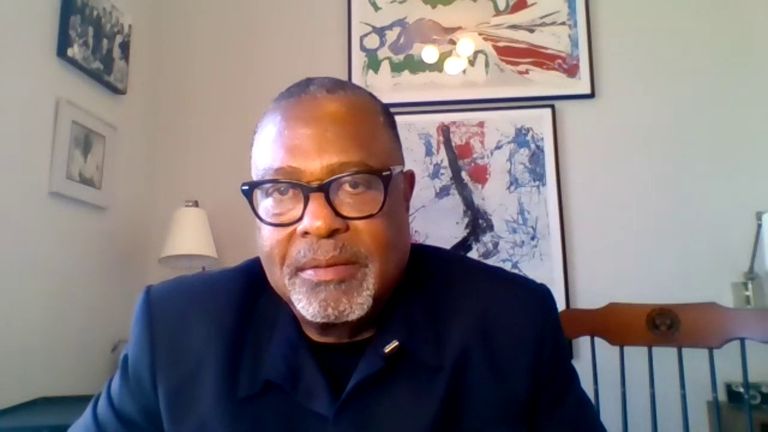 "I think without the sports world, without the efforts, without people like LeBron James [and others] speaking out as loudly as they have there would not have been the understanding of the severity of the issue.

"Using Lewis Hamilton's analogy 'you have to keep your foot on the pedal'. This success [athlete activism] came as a result of these years and years of efforts.

"So if anything, it's continue the course. As the movement has gone away from protest through to progress, what can we really do that's impactful?

"And all of this work the athletes are doing in terms of talking to state legislatures in the states, in terms of thinking about how to change the regulations around the world where there are negative impacts on people as opposed to protesting after the fact. I think we'll begin to see a lot more of that."

Dowden: Justice has been done

"Justice has been done," he said. "It is so important in situations like this, particularly when people feel the justice system has not served them in the past."

Dowden said he was committed to stamping out online racist abuse in the UK of the kind faced by many black footballers.

"Those sort of things were routinely heard on the terraces and in stadiums a few years ago. I know sadly it still happens to a degree now," he said.

"What we need to ensure is that the sort of things that people wouldn't feel comfortable saying on the street, they don't feel they have a safe space to do it online.

"I found it extraordinary speaking to some of our leading black players that first thing in the morning, last thing at night, they turn on their mobile phones, they have got this abuse coming and it is just not acceptable."