Basketball: Does the sport get the respect and support it deserves?

Former GB captain Kieron Achara: "The only logical explanation that I can give is that there is a subconscious bias against basketball and specifically the demographic that basketball represents." 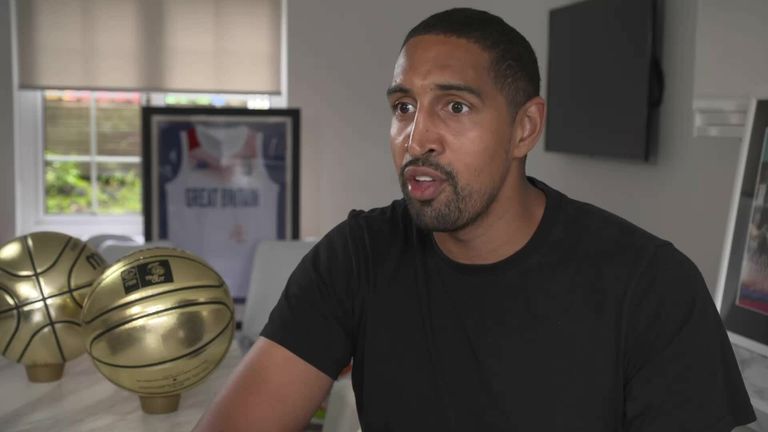 The level of funding put into basketball and how that impacts its largely BAME-dominated participant base has been the subject of intense debate for the best part of a decade.

Basketball is England's second most popular team sport in terms of participation and is particularly popular among Black, Asian and Minority Ethnic communities.

Regular participation in the sport had been waning but has bounced back across the board since grassroots basketball funding was scaled back ahead of the London 2012 Olympic Games.

Team GB's men did not have the Olympic campaign they had hoped for in London, losing four of their five matches to make an unceremonious exit at the group stage, prompting further funding cuts, this time at the elite level.

Sport England has invested around £20m in basketball since London 2012, but Kieron Achara - who was part of the Team GB basketball squad at the Games - believes 'under-funding' is part a wider issue related to how basketball and its participants at all levels are perceived.

"I do feel from a basketball perspective, it's not a respected sport, that's the truth," the former Scotland international told Sky Sports News.

"It doesn't get the media attention, unless you're a Luol Deng (the British two-time NBA All-Star) and you're essentially the highest paid British athlete at the time. And even then, he still walked down the streets and no one recognised him.

"I bang my head against the wall having these kind of conversations and always try and give the benefit of the doubt. I'm very empathetic so I've always tried to look at things from other people's perspectives.

"And the only logical explanation that I can give at this moment in time that I can accept - because I don't want to go any deeper than that - is that there is a subconscious bias against basketball and specifically the demographic that basketball represents."

Sport England, the agency responsible for growing and developing grassroots sport and getting more people active, has told Sky Sports News it continues to remain committed to supporting basketball.

A statement read: "Sport England has always recognised the significant value of basketball, for the enjoyment and benefits it brings to the thousands of people that play regularly, and the way it can engage a wide range of people, including young people from diverse and disadvantaged backgrounds.

"Because of this, over £18m of funding has been committed since 2013 to community clubs, projects and programmes, as well as to Basketball England. And even though our strategy has usually meant we don't take responsibility for the elite or professional side of the game, we have helped to rescue British Basketball more than once when the GB teams were under threat.

"We're also in discussions about some new investment in the British Basketball League for their work using pro players as role models in their local community, to discuss the important topic of Black Lives Matter and to encourage more young people into the game.

"There is no doubt about the important role that basketball can play in communities and Sport England continues to work with the game's leaders to find new and innovative ways to get more people playing. For example, 3x3 basketball will take centre stage at an iconic outdoor venue at Smithfield in the centre of Birmingham at the 2022 Commonwealth Games.

"It's an opportunity to present a sport in a new, exciting way and make it even more accessible to more young people."

The GB's men's and women's basketball teams were guaranteed a host nation spot at London 2012 and were being financed by UK Sport in the build-up to the Games.

When they failed to advance to the knockout stages, their funding was cut and the sport has struggled for financial support since.

Achara described the decision to scale back funding as "perspective blindness", adding medal success should only form part of the funding equation.

"You don't know what you can't see and are not part of," Achara said.

"That lived experience, for a lot of people at the top who are the gatekeepers to funding in sports, they don't relate to that, they don't feel that, they can't empathise the same way because they just don't see it.

"But how do we do what we said in 2012, which is inspiring a generation to take up something? What are the gateways and opportunities to get into those sports? Those are the questions that need to be asked.

"I personally believe that thinking about what the wider impact is on society and what roles can sport play and how we can fund those roles accordingly [is something that needs to be considered]. Getting a gold or silver medal is easier to measure but the impact it is having on society takes a lot more effort."

UK Sport told Sky Sports News an extra £330,500 from their Aspiration Fund had been allocated to the women's team to aid their attempt to qualify for the Tokyo Olympics, adding all funding submissions for the Paris Olympic cycle will be judged according to the same investment criteria.

"We recognise the popularity of basketball and we have worked closely with GB Basketball in recent years to support the potential of their teams and athletes to achieve Olympic success," a UK Sport spokesperson said.

"UK Sport's role has traditionally been to direct funds from the Government and The National Lottery towards delivering medal success at the Olympic and Paralympic Games.

"In 2018 the DCMS and UK Sport delivered a £500,000 grant to GB Basketball. The women's team also received an extra £330,500 from the Aspiration Fund to support its qualification campaign for Tokyo.

"The investment process for the Paris Olympic cycle is now under way and funding submissions from all sports will be considered against consistent investment criteria."

UK Sport has also since provided extra funding to 10 National Governing Bodies (NGBs) to help mitigate the consequences of the coronavirus pandemic. The agency is distributing a total of £1.38m to NGBs which applied for a share of its continuity fund, with £180,000 of that allocated to the British Basketball Federation. 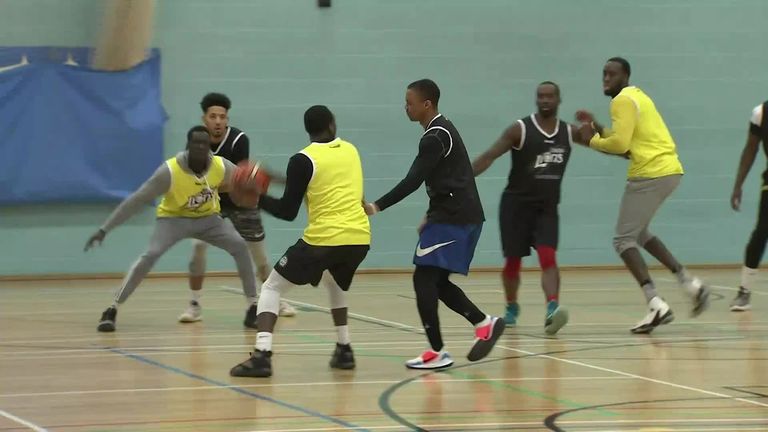 BBL chairman: Professional basketball 'seems to have been ignored'

Investment in the professional game - where 70 per cent of the players are from BAME backgrounds - is also a thorny issue.

During the coronavirus pandemic, the government handed £16m to rugby league to stop the sport collapsing but rejected a £1m bailout of the British Basketball League - something its chairman, Sir Rodney Walker, believes is another indication of the sport being overlooked.

"Unlike other sports like football, professional rugby, cricket etc, we don't have any major sponsors, so we are wholly dependent on performing in front of a paying audience and unless that becomes possible, the future of the sport is in serious jeopardy," he told Sky Sports News.

"It's there for all to see that a lot of people who play basketball are from ethnic communities.

"What concerns me is the failure to recognise that, as a sport, we do very valuable work in the community, which assists the government, particularly in the urban communities and yet professionally when we look for some assistance, we seem to have been ignored." 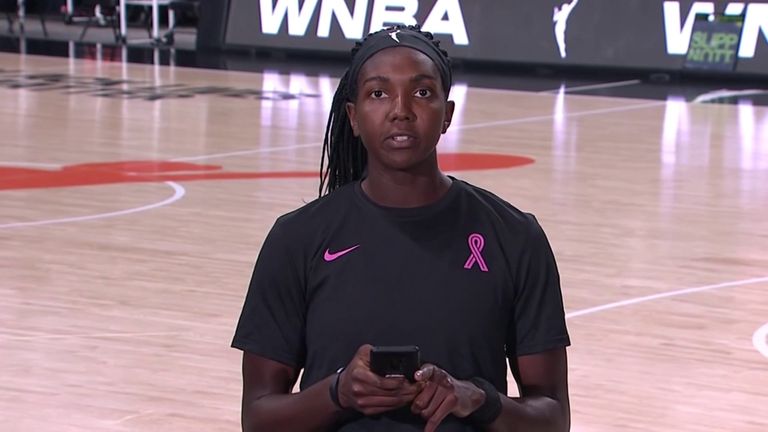 'Government must put their hands in their pocket for basketball'

Manchester Mystics player Rheanne Bailey believes the Black Lives Matter movement has highlighted some of the structural inequalities that many BAME athletes still face and has called on government to do more to support basketball.

"It is very difficult to perform at your highest level when you feel like your government, your country, isn't backing you," she told Sky Sports News.

"Our sport attracts a diverse community - anyone can be involved, no matter your socio-economic background, no matter what race or what sexuality you are.

"It is something the government say they value, but I think they need to put their hands in their pocket and show it."

Government 'will do everything' they can to support sports

A Department for Digital, Media, Culture and Sport (DCMS) spokesperson told Sky Sports News in response: "The Government has provided unprecedented financial support to businesses to cope with the pandemic, which many sports have benefited from.

"We continue to work closely with sports to understand any challenges they are facing as a result of the pandemic and will do everything we can to support them." 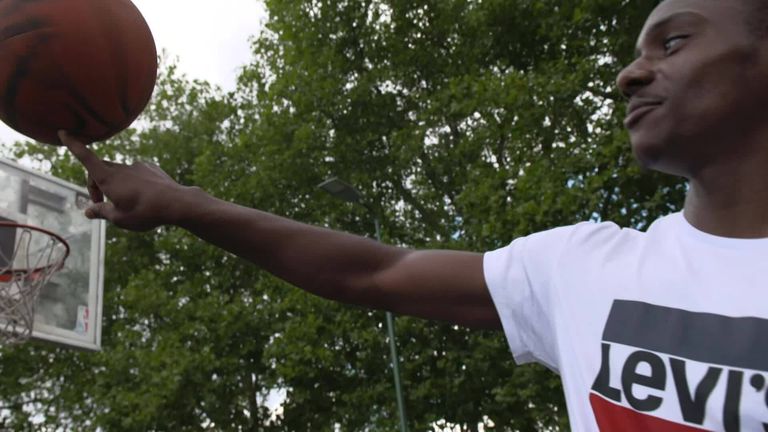 The journey of former professional basketball player Joel Henry offers perhaps the best illustration of how the sport can change lives.

After a troubled past, which included losing a close friend to gun crime, Henry got involved in basketball through a local youth club and is now one of the best dunkers in the world.

He believes his own turnaround demonstrates why basketball deserves respect, insisting it can be a lifeline for young people across the UK.

"[I thought to myself] this is the vehicle that I am going to be using to change my life," Henry told Sky Sports News about his early interactions with the game.

"I don't see funding being put into basketball as it should be. There are a lot of kids dreaming of being pro dunkers, pro athletes or pro basketball players and they don't necessarily have the opportunity or an avenue to go down to actually pursue their dreams.

"We definitely need support from the funders, the commissioners, the professional organisations to put back into the kids at grassroots. They need help. There are a lot of kids that don't necessarily have the right direction. They have dreams but they don't have direction."