Andrew Pozzi and Imani Lansiquot have been named in a 72-strong British squad for the World Championships in Qatar.

With the Tokyo Olympics less than a year away, the pressure is mounting on the country's top athletes with another chance to impress on the biggest stage with the Championships starting on September 27.

Sprinter Dina Asher-Smith, triple European champion from 2018 and IAAF Diamond League runner-up over 200m, and heptathlete Katarina Johnson-Thompson will all be gunning for medals with the GB squad set a tough target of seven to nine by UK Sport.

In total 44 athletes return to the world stage having previously earned selection for London including Sky Sports Scholar and world indoor champion Pozzi.

"I'm delighted to have been named in the team," the 110m hurdler said.

"I've had a good season and despite a couple of setbacks I'm now training really well and excited to show my best form in Doha." 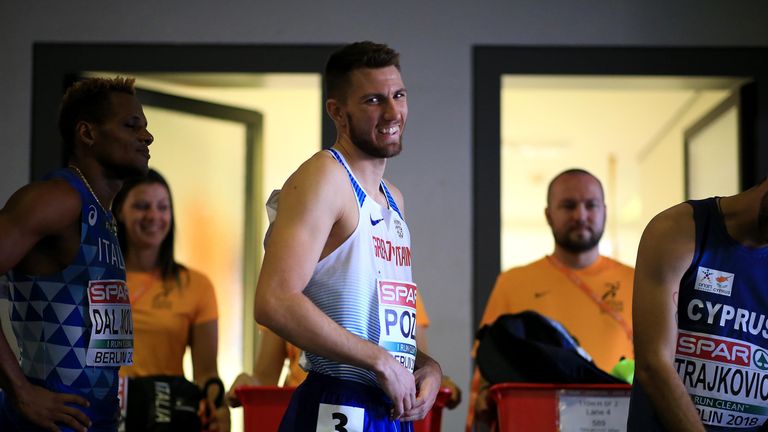 Andrew Pozzi says being based in Italy has revitalised his career

Sprinter Lansqiuot, who just missed out on a spot in the individual 100m, has struggled in recent weeks with a slight injury but will get a chance to shine in the relay.

The 21-year-old Londoner is in a team of six with the British relay runners having won an unprecedented medal in each of the four relays in London in 2017.

"It's always an honour to represent your country, so I'm looking forward to pulling on the GB vest," Lansiquot said.

🐶🇬🇧😺 With the support of Team Rescue at Battersea, we are delighted to announce the 72-strong team that will #REPRESENT Great Britain and Northern Ireland at the IAAF World Championships in Doha from September 27th - October 6th.#REPRESENTRESCUE #IAAFDoha2019 #Battersea pic.twitter.com/IZf5u0edrL

"I worked really hard to be in the best possible shape to contend for one of the 100m spots, but due to my recent injury I just came into fitness a few weeks too late.

"Despite this, I wish the girls all the best, and I'm looking forward to getting quicker and focused for the relay."

Adam Gemili and Zharnel Hughes will double up in the men's sprint events and European champion Matthew Hudson-Smith will take on the world's best in the 400m.

Martyn Rooney, who has been named in the seven-strong squad for the men's 400m relay, will be competing at his eighth World Championships.