Meeting the brains behind Donald Trump's balloon advert and meeting one of Sky's top presenters.

It was an inspirational week's work experience for Freya Anderson who took time out from her hectic swimming schedule to spend time at Sky.

So what did the 18-year-old Sky Sports Scholar get up to at Sky HQ in Osterley?

"I was slightly nervous but also really excited. I'm not sure what route I want to go down after my swimming so to have this opportunity going to Sky was amazing!

I had a lot planned for the four days and on Monday I got stuck straight into a planning meeting where we talked about what they were going to show on air and which presenters would be doing it.

Some of it was hard to understand but the meeting was very relaxed and not what I expected.

It was cool to see how much goes into planning what's on Sky Sports. I got to visit the studios and behind the scenes. I sat with the floor manager and some of the camera and lighting guys.

It was fun seeing the techniques they use to make sure you get the best quality view on the TV at home. I also had time in the gallery where the producers sit and make sure everything runs smoothly.

I had lunch with my Sky mentor and presenter Vicky Gomersall which was really nice. We had a great chat about things and then I got to shadow her.

Vicky comes in at 1pm and goes to her desk for research for when she goes on air. She gets her hair and makeup sorted at 3 and goes on air by 4. It all seemed very rushed, but Vicky stayed calm and professional. It was really good to catch up with her!

On the second day I was with the strategy and planning teams. Again I thought it would be hectic, but the atmosphere was really relaxed and calm. I got to see the schedules they create and ended up changing right until the last minute! 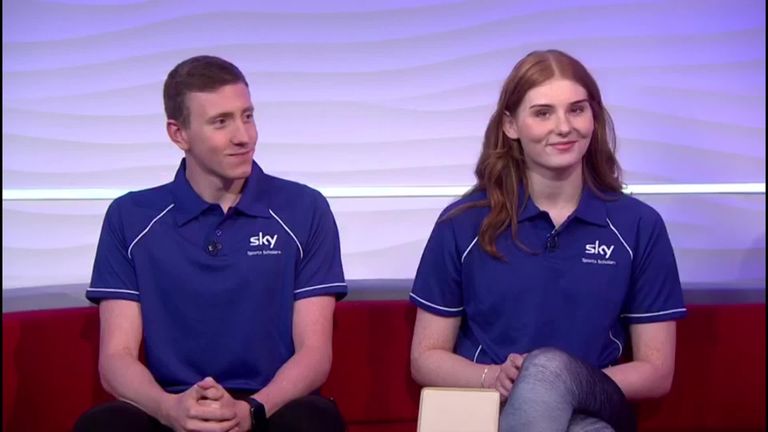 They can get messy apparently! For example, when I was there the cricket ended a day early, so they had to fill in the gap scheduled for the day after. So, it was cool to see everything that happens behind the scenes.

I got to meet the social media digital team which was so insightful because people do want to see what you're up to and like your content. I also learned about how they operate the Sky Sports Instagram pages which was really cool - they post every half an hour!

My third day was with Sky Creative which was probably my favourite day. I got to see some of their old adverts and some that haven't been released yet.

I went into a meeting which was really relaxed again and that was about the upcoming Christmas advert and how everything was going to run - the cast, costumes, budget etc.

There's a massive team behind each advert and lots of changes along the way. They also do the banners you see along the road or bus stops so there are lots of media types they are dealing with.

At the end of the day I sat with a lady that does adverts for Sky News - she created the one of Trump's visit to the UK with the big balloon over London. It was so cool to see how she made that for fun but eventually got it approved and made it to TV and I had watched it!

On my last day I got to hang out on the Soccer AM set and I was with the guy responsible for getting the music guests on. It was really cool to listen to him and all the stories of celebrities he's tried to get on the show.

I also got in an edit suite and see how they put together clips for 'Shocker Saturday' which was brilliant seeing how they edit them.

I managed to go into a sound booth and see the guy record the voice-overs for adverts! It was so strange seeing him do it in person as I've heard his voice before. But everything was so professional. That was a great day.

Overall the experience at Sky was amazing. I loved being in Sky Creative and the Sports Studios the most!

I was surprised that it was so relaxed which was nice. I think it's really opened my eyes to see what kind of jobs are out there after my swimming finishes!