Maddison Ludbrooke speaks to Sky Sports about the experience

It has been yet another golden year for Team England in the ParaCheer Hip Hop division of the International Cheer Union (ICU) World Championships.

The pressure was on as they were looking to replicate their 2018 season success where they brought home all three titles available in the division - Coed Advanced, Freestyle Pom and Hip Hop.

And they did not buckle with all three squads once coming out on top against some of the world's best in all three of the divisions they entered, completing a double treble.

Speaking to Sky Sports after Team England Hip Hop claimed the final ParaCheer title of the day, Maddison Ludbrooke said: "It felt so good to be on that stage representing our country anyway but winning gold was just the best feeling in the world.

"I was stood next to a few of my teammates when they told us we'd won and I was almost in tears because we were all World Champions and that was because we had all worked together as a team and like a family to get that result - we completely smashed it."

ParaCheer, which made it's World Championships debut in 2017, is a fully inclusive version of the sport of cheerleading, where a minimum of 25% of the team must be made up of disabled athletes.

It was developed in the UK by Rick Rodgers and incorporates most of the elements that you would expect to see in a cheerleading routine - stunts, tumbling, jumps and dance - whilst the rules and scoring take into account the adaptations required for a wide range of disabilities.

Ludbrooke, who competes in cheer competitions throughout the UK, believes that there is a great deal of collaboration involved in the sport too.

"With para teams the way they incorporate and adapt the moves to include everyone and work to their styles of movement is so good," she said.

"For example we have wheelchair users included in our teams and the positions are all worked out with them so that it's easy for them to get across the floor." 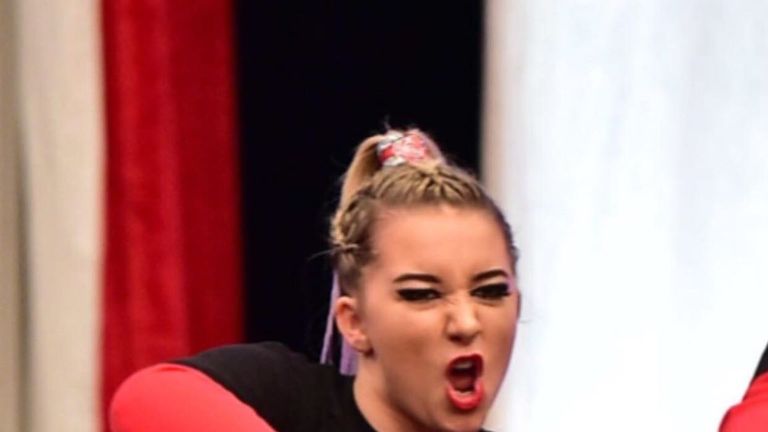 I really want to come back and be part of the team next year that defends this title but with the expense of it I don't know if I'll be able to.

Athletes who compete in ParaCheer, like Ludbrooke, currently have to self-fund their training, travelling and competing costs.

With it being a relatively new division of the sport as well, despite Team England's regular success on the world stage, they struggle to find sponsors even for whole team costs, leaving the individual athletes to find the money to compete at major championships themselves which can run into the thousands.

"I really want to come back and be part of the team next year that defends this title but with the expense of it I don't know if I'll be able to, Ludbrooke added.

"To get me here this year mum and I fundraised over £5,000 ourselves, putting a little bit of money aside each month, and lots of family helped out towards getting to this amount too."

Ludbrooke, who was first introduced to cheer and dance at the age of six to stop her "being a maniac around the house", also loved the opportunity to compete as part of a national squad which gave her the opportunity to meet other people from all around the world and exchange traditional gifts with them.

"I'm a really awkward person really so it was quite scary going up to people I'd never met before, in fact I asked other people to do it for me at first," she said laughing.

"But once I felt confident I had so much fun and I've got the koala toy I got from somebody from Australia on my phone now."

Celebrations of a Champion

With the ICU World Championships being held so near to DisneyWorld there was only one choice for Ludbrooke when it came to celebrating - a trip to Hollywood Studios with some of her team-mates.

Looking ahead to when she returns home to the UK, her friends and family have already planned something special for her.

"One of my mates has already said to me he's going to get all of my friends together and they are going to cheer for me when I get back," she added.