The American outfit have worked tirelessly to restore PATRIOT and repair the significant damage sustained during her crash and capsizing. They will now race in a winner-takes-all semi-final regatta against Luna Rossa Prada Pirelli for a place in the PRADA Cup final

It's often said that in times of adversity, and when backs are against the wall, people find a strength within them that they didn't know they had. That has truly been the case for New York Yacht Club American Magic.

Rewinding back to the race that changed everything, the American team were leading and after two challenging days out on the water. They were en-route to securing their first race win of the PRADA Cup Round Robins. It was about to be a significant turn up for the books and then, it all went wrong when a huge swell of wind caused havoc. 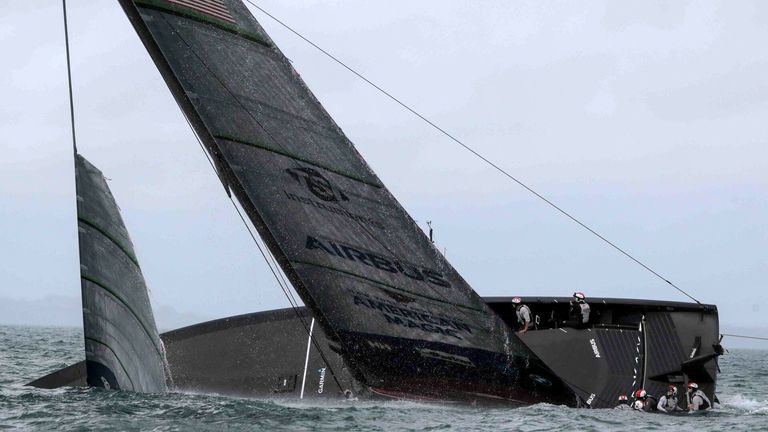 Terry Hutchinson, the skipper and executive director of New York Yacht Club American Magic, recalls the moment he knew something was wrong with clarity. He performs the role of one of the grinders on board and following PATRIOT'S crash, found himself in trouble.

"My most vivid memory was when I heard Dean [Barker] say that he'd lost the rudder," Hutchinson said.

"I'm clipped into the boat, so I went to eject myself out of the boat and my clip didn't come undone, which immediately got my tackles up so then I went for the knife.

"The cockpit filled up straight away and it very quickly went from everything's okay to a pretty high fever from my perspective, as I was immediately underwater and pinned underneath the main sail.

"I was trapped, so Cooper (Dressler) grabbed his knife, he cut the left one and got me out. From there, all of us popped out from underneath the main sail. We did the headcount and we were all safe." 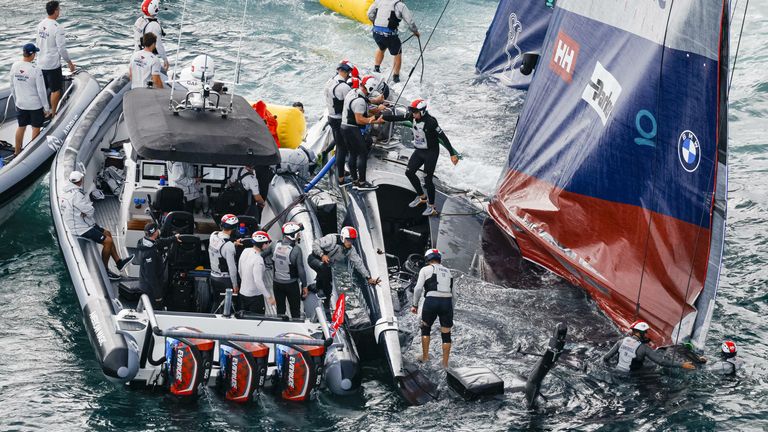 We were trying to tow her but then it was taking a lot of time because the boat was not water tight anymore due to the damage. The boat was literally sinking.

In the time period that followed, it was clear to Hutchinson, his team and the support crew out on the water, that PATRIOT was in real trouble.

"We were under a lot of water straight away, then the situation progressed and really escalated rather quickly," he said.

"A piece of carbon was pulled out of the water and that's when we thought that there was probably a hole in the boat. It raised everybody's eyebrows very quickly.

"We ended up with 16 pumps inside the boat, we had a jib wrapped around the hole. Then the fire and rescue [units] deployed what I would categorize as two 'airplane-style' life rafts which we wrapped underneath the bow of the boat and inflated. That really that stopped the bleeding, from that moment on."

PATRIOT'S Capsize - A Timeline of Events

After a herculean effort, by all involved PATRIOT eventually made the 10.9-mile journey back to shore and returned to the team's base just before 11pm that evening.

Then, the whole outfit set about absorbing just what had happened, and where they were going to go from there.

"We were ripping in that last race, everyone had brought it all back together after a tough couple of days," Paul Goodison, PATRIOT's mainsail trimmer said to New York Yacht Club American Magic's team in the aftermath.

"We were having a great race and that's what we've got to look to. Hopefully, they can weave some magic in this next week or so."

When PATRIOT and all involved returned to the shed, Hutchinson took the opportunity to address them as the team's behind-the-scenes footage highlighted.

"Obviously that's not exactly the end of the day that we wanted, but the boat was going really well today," he said.

"You can't help but think that it's a sign of things to come when we get her back out there. What an incredible effort by everybody in this room to get the boat back to the dock. 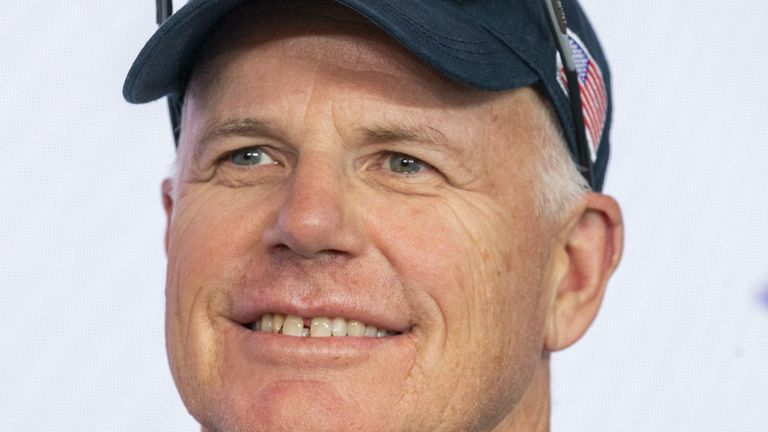 Time and time again, when you look at our history for the last three years, all we've done is answer the question. Whenever it's got hard, we've just kept on chipping along at it.

"Our greatest strength in this whole regatta is everyone in this room, so if we rely on each other, back each other and support each other, we won't go wrong.

"Let's not give in because of this, this can be fixed, and we have the skill in this room to do that. We should just do what we have to do to get it done, because it's going to make one hell of a story."

Hutchinson's words fired up his team as they went to work at restoring PATRIOT to full fitness and the capsize, showed the best of the sailing world too as Emirates Team New Zealand, INEOS TEAM UK and Luna Rossa Prada Pirelli Team all supported their rival.

Emirates Team New Zealand assisted with the boat-building aspect while all of the electronics and mechanical aspects of the boat were removed, tested, fixed and returned, piece by piece.

An AC75 is a beast of a boat, to give you an indication of their complexity, INEOS TEAM UK's second race boat BRITANNIA took 90,000 design hours and 50,000 construction hours to create.

New York Yacht Club American Magic's shore team may not have been building PATRIOT from scratch, but that doesn't take anything away from the incredible feat that they have achieved.

With little time to think, plan and execute, the team have defied the odds. They've looked at the impossible and made it possible.

In the words of their skipper and executive director, New York Yacht Club American Magic's team "have got it done".

Now, everyone at New York Yacht Club American Magic will have their sights fixed on picking up where they left off about a minute before their capsize, when they were in the lead, ripping it up and going in search of a race win.

Watch every moment of the America's Cup challenge, live on Sky Sports. Coverage continues with the PRADA Cup semi-finals at 2am on Sky Sports Mix, repeated again at 9am.