The British outfit return to the water with a 4-0 deficit to overcome against Luna Rossa Prada Pirelli in the decisive PRADA Cup Final series. Coverage of races five and six is live on Sky Sports Main Event and Mix on Saturday from 3am, repeated again at 8am

Sir Ben Ainslie says INEOS TEAM UK are focused on taking "each race as it comes", as the decisive PRADA Cup Final series resumes on Saturday, live on Sky Sports.

The British outfit are preparing to return to the water for races five and six against Luna Rossa Prada Pirelli, and they currently trail their opponents four-nil in the first-to-seven wins series.

Both teams were supposed to spend Wednesday out racing out on the water, but due to New Zealand's COVID-19 alert level changing, that race day was postponed.

After the decision was made to postpone the action, there was a considerable amount of debate surrounding when, and how, the series would conclude.

The PRADA Cup Final Series is the culmination of the PRADA Cup; it is the competition that decides which team will become the challenger to Emirates Team New Zealand in the 36th America's Cup match.

The series winner is the team that reaches seven victories first and four races had taken place before it was halted due to the change in COVID-19 alert level in Auckland.

INEOS TEAM UK were in support of the America's Cup Event (ACE) organisers' view on waiting until Auckland reached Alert Level 1 to maximise the engagement around the competition, even if that meant pushing racing back slightly.

Luna Rossa Prada Pirelli wanted racing to restart as soon as possible, with safety precautions for all in the country, and supported the Challenger of Record's position of invoking a hard stop after February 24, in accordance with the rules.

In the end, the America's Cup Event organisers announced that racing would recommence on Saturday with races five and six, and after that, two races would happen each day until one team reaches seven victories.

Despite the wealth of conversations about the rules and regulations this week, Ainslie is fully focused on what's about to happen on the water.

"At the moment, it's just about taking each day and each race as it comes," he said to Sky Sports.

"We need to make sure that we do the best possible job that we can, we need to put the other team under pressure and see if we can force them into making some mistakes.

"This weekend we're looking at probably some lighter winds. We know that it's going to be tough against Luna Rossa, they go well in the lighter airs, but we've been working hard in the last couple of days and I think we've made some gains."

"The conditions will be what they will be, and we've got to start winning some races. We've got to get out there, sail the boat as fast as we can and try and put the other team under some pressure." 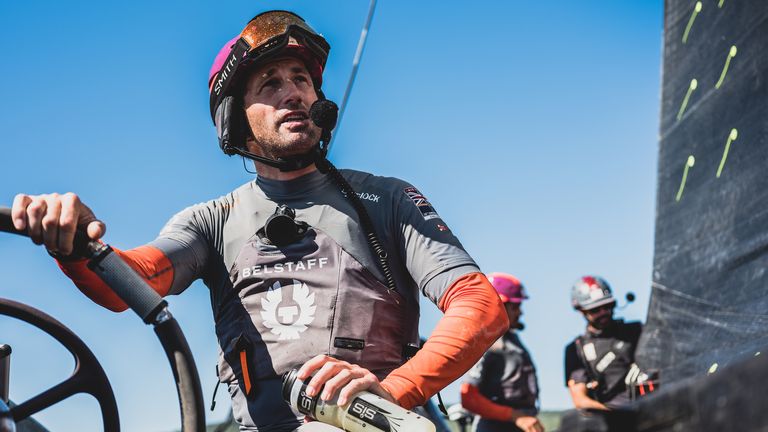 The conditions will be what they will be, and we've got to start winning some races. We've got to get out there, sail the boat as fast as we can and try and put the other team under some pressure.

With both INEOS TEAM UK and Luna Rossa Prada Pirelli under a 'measurement certification', their boats cannot be changed significantly between races. As a result, Ainslie and his team have focused on their technique during the last few days.

"Some of these racing techniques, particularly through the manoeuvres, are very subtle," the skipper and team principal said within his 'Guv's Call' feature on INEOS TEAM UK's website.

"There's so much that goes into a single manoeuvre, from the sequencing of changing the load between the boards, the main and jib transfers, the rate of turn and more.

"We have been looking at that and seeing how we can make gains because, whilst there wasn't a huge amount between the two teams, we weren't quite as strong as the Italians in our tacks."

Ainslie also shared that they have paid particular attention to their pre-starts, the two-minute period in which both teams jostle with each other and aim to cross the start line at pace, when the clock hits 00:00.

"Nailing our strategy, boat handling and the split-second timing will be key in potentially catching the other team off-guard and taking the lead from the start," he added, before stressing their need to remain calm and focused.

"All through this challenge, we have kept our emotions level. We stick to our processes, do the best job we can and take each race as it comes," he concluded at the end of his 'Guv's Call'.

"That will continue to be our approach. We know we need to start winning some races and we believe we can. The team has been brilliant across the board and has not wavered a single minute.

"Not a single person in the team has not lived up to the challenges that we have faced. We are in the thick of the fight right now, we will give it our best shot. I have every confidence in the team that we can come through this."

Watch every moment of the America's Cup challenge, live on Sky Sports. Coverage continues with the PRADA Cup Final on Saturday from 3am on Sky Sports Main Event and Mix, repeated at 8am.