The sixth day of racing saw the defenders win a dramatic first race before the second race was abandoned due to a last-minute shift in wind. The New Zealand team now hold a 6-3 lead over Luna Rossa in the first-to-seven series; racing will continue on Wednesday, live on Sky Sports.

Emirates Team New Zealand moved to within one win of retaining the Auld Mug after another race victory on Tuesday, before the second race of the day was postponed due to a last-minute shift in wind.

The defender's 30-second win in race nine, created by passing Luna Rossa Prada Pirelli late in the fifth leg, created a 6-3 lead in the first-to-seven series.

Race 10, which if the Kiwis had won would have secured the oldest trophy in world sport, was due to start at 5.45pm local time and a last-minute wind shift forced the race committee to call the contest off.

Both teams will now return for a seventh day of racing on Wednesday, and if Peter Burling and his New Zealand team win the opening race of the day, they will secure the Auld Mug and have successfully defended the America's Cup. 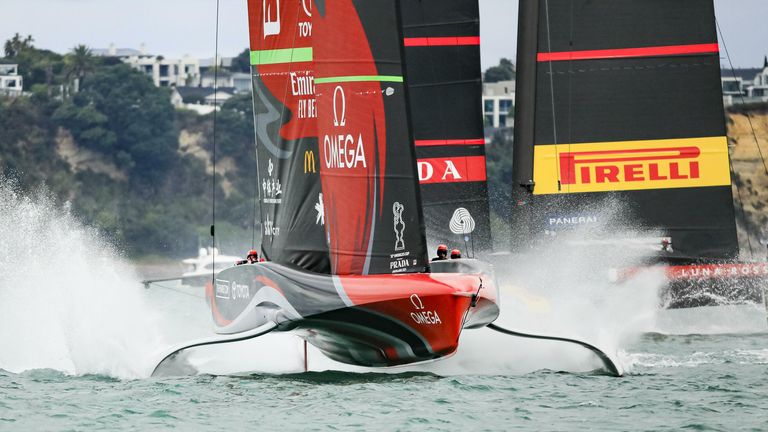 As both outfits made their way out onto the race course, there was a crackle in the air as teams and fans alike knew the significance of the day.

With Emirates Team New Zealand holding a 5-3 lead, two race wins would result in a successful defence of the Auld Mug, while Luna Rossa Prada Pirelli were solely focused on clawing a point back in the first race and moving on from there.

Course C, known as the Stadium Course, was selected by the race organisers and with stronger and shiftier wind conditions present, the stage was set for an outstanding contest. Neither team disappointed and, from start to finish, it was a duel that tested the sailors' nous and expertise.

The Italian outfit, led by Francesco Bruni and Jimmy Spithill, attacked the start aggressively and enjoyed an advantage in the early stages.

Indeed, they sailed superbly throughout five of the six legs and were able to fend off the challenge of Emirates Team New Zealand and their powerful race boat, Te Rehutai.

As Luna Rossa approached the bottom gate at the end of leg four, they held a 180m lead before the New Zealand outfit pressed back at them and rounded the mark shortly after, travelling four knots faster.

On leg five, the two teams decided to occupy opposite sides of the race course and after a key cross they swapped positions. It was at that point when a strong shift arrived on the right side, the side the Italians had vacated, and that benefitted the Kiwis enormously.

By the time the pair approached the final gate, the Kiwis had taken the lead. They rounded it 18 seconds ahead and surged out on the home straight to break Italian hearts with a 30-second victory.

After the drama of race nine, both outfits re-grouped and then took to the course for race 10's pre-start sequence.

However, once they were out there, the race committee announced a 10-minute postponement and a new start time of 5.55pm. Each race day, there's a cut-off of 6pm for racing to begin, so the organisers were cutting it fine to be within the regulations.

With the added wait time, the teams were forced to manage their nerves and also decide if they wanted to make any changes in terms of their jib selections.

Both boats moved back towards the course four minutes before the new start time, however the final call was then announced as the race organisers said that the breeze had "shifted massively left" and they wouldn't be able to reposition the course in time.

Pressure on for both teams

Despite being on the brink of winning the contest, and holding a three-race cushion, Burling believes that the scrutiny on his team remains higher than ever.

"I don't think that any of the pressure has come off," New Zealand's helmsman said.

"The plan doesn't really change for us; we've got some modifications [happening] in the shed at the moment and we're just going to continue to improve the boat and the way that we sail it.

"They've put an amazing challenge together and they're proving to be very worthy challengers," Burling added about Luna Rossa. 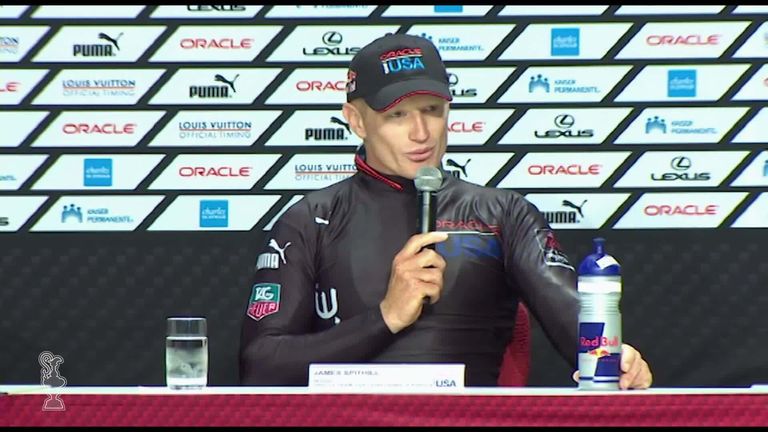 For Spithill and Luna Rossa it was a bittersweet day of racing. He's experienced enough to know just how well his team sailed, but all that effort didn't result in a much-needed victory. Now, although it's 'match point' against them, his belief is unwavering.

"There's no doubt in my mind [that it's still winnable]. Coming back to the dock, you can just see it in everyone's eyes, there's no negativity nor are heads going down, everyone is ready to roll.

"In this team no-one gives up, we're going to take ownership of today's race and we'll get stronger.

Watch every moment of the America's Cup challenge, live on Sky Sports. Coverage continues with the seventh race day of the 36th America's Cup Match on Wednesday from 3am.