WWE's Kevin Owens: 'Facing The Undertaker at WrestleMania would be huge'

Kevin Owens is intent on being the Universal Champion heading into WrestleMania 33 - and he says he would gladly put the belt on the line against The Undertaker, Shinsuke Nakamura or Finn Balor.

Owens will move a step closer to defending the title in Orlando in April if he successfully retains the prize against Roman Reigns in a singles match at next Sunday's Royal Rumble pay-per-view, live on Sky Sports Box Office.

The Canadian could face the winner of the 30-man Royal Rumble Match at WrestleMania, a bout The Undertaker - the victor in 2007 - has confirmed he will compete in for the first time since 2009.

Owens, speaking on a pre-Rumble conference call, insists a clash with Taker - who has lost just one of his 24 clashes at WrestleMania, to Brock Lesnar in New Orleans in 2014 - would be special.

The Raw star also feels reigning NXT Champion Shinsuke Nakamura has the "aura" to main-event 'Mania and that Finn Balor - who was forced to vacate the Universal Title a night after winning it at SummerSlam in August after injuring his shoulder - would be a deserving rival.

"I can't remember a Rumble line-up in recent years that has been so strong," Owens said of a match that will include Lesnar, Big Show, Randy Orton, Goldberg, Bray Wyatt and his friend, Chris Jericho.

"If I had to narrow it down to one [to face at WrestleMania] it would be The Undertaker. He is synonymous with that event and I was always in awe of him - as a kid, teenager and adult. 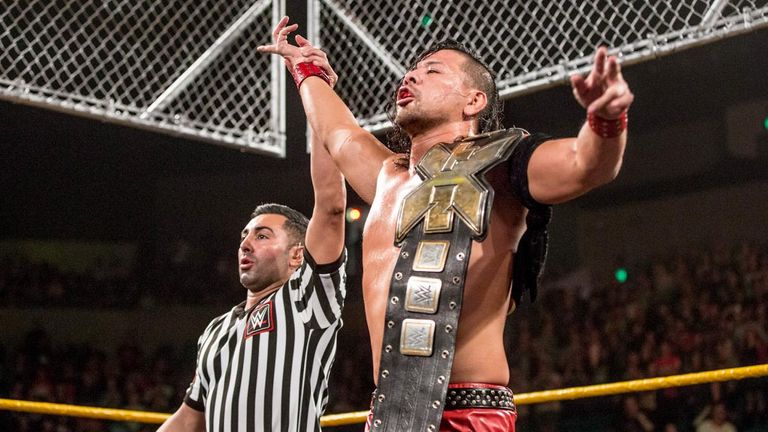 He is able to grab the attention of people right away with his mannerisms and entrance - by the time he gets to the ring, you are kind of hooked.

"I think if you look at NXT, the one guy who seems like he would belong in a WrestleMania main event is Nakamura, because of the aura and the buzz that he gets.

"He is able to grab the attention of people who don't really know who he is right away with his mannerisms and entrance - by the time he gets to the ring, you are kind of hooked.

"Balor also never lost the title so I would gladly give him a match for it when he is healthy enough."

Owens says he was impressed by the two-night tournament at Empress Ballroom, which featured 16 wrestlers from across the Home Nations and the Republic of Ireland.

"They were all performing in front of a crowd that knew them pretty well and that translated," he said. "The way they were introduced through video packages to tell their story was very well done.

"Bate and Dunne stood out - but I expected them to stand out because I always hear people talking favourably about them."

The former Pro Wrestling Guerrilla and Ring of Honor World Champion revealed, however, that he was never that enamoured with Goldberg growing up, believing the WCW legend 'stole Steve Austin's look'.

Owens, who interacted with Goldberg on a recent episode of Raw, could end up facing the 50-year-old at WrestleMania if they both triumph in their respective matches at the Royal Rumble.

"I was never a WCW fan growing up so I was never a Goldberg fan at all - and I've told him that," added Owens. "He was the enemy, he was the guy taking Steve Austin's look.

The pay-per-view will cost £19.95 for viewers in the United Kingdom and €24.95 for customers in the Republic of Ireland.

A live blog of WWE Royal Rumble will run on skysports.com and the Sky Sports app during the event, featuring text commentary, social media and short highlight clips.

You can order the show by visiting this link: https://my.sky.com/orderboxoffice/?DCMP=WWERoyalRumble

You can also book the event over the phone: UK viewers should call 03442 410 888, while customers in the Republic of Ireland should call 0818 220 225. (There may be an additional charge for telephone bookings).

You will also be able to order the show via your Sky remote nearer the event:

Sky+: Press the box office button on your remote, then click the sports tab followed by WWE Royal Rumble.